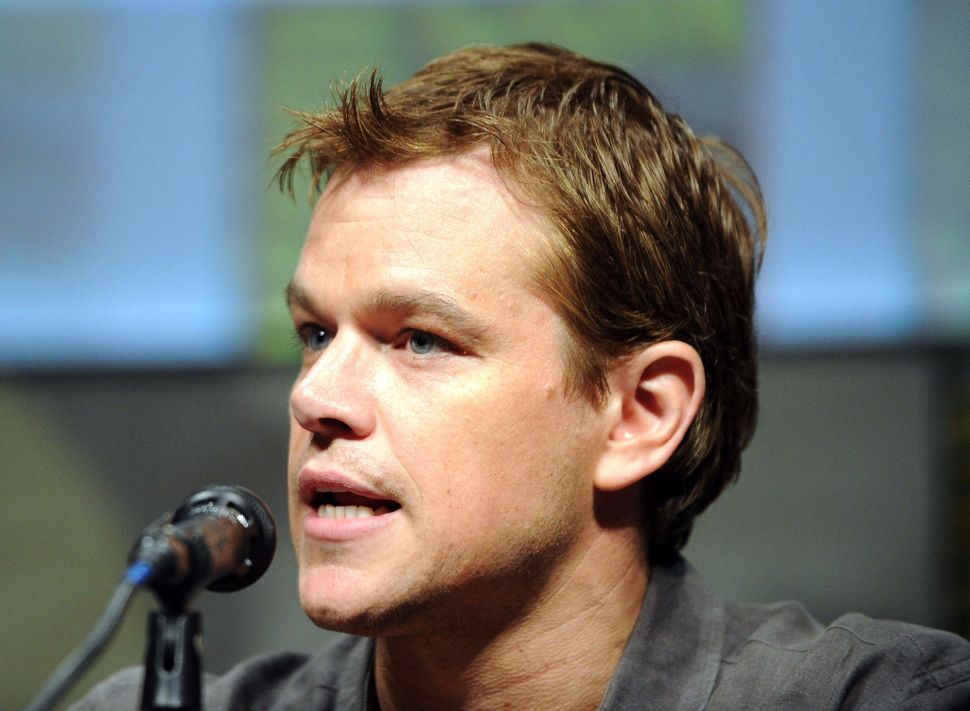 Matt Damon spoke on ABC News last week about the allegations against Harvey Weinstein, who produced Damon’s breakout film “Goodwill Hunting,” Louis CK, who he calls himself a “fan” of, and the recently resigned senator Al Franken. This interview should be the beginning of the end of Damon’s career.

In a conversation with Peter Travers, Damon reacted at length to the recent outpouring of sexual harassment accusations leveled at famous men. Damon spoke about the “watershed moment” of “women who are empowered to tell their stories” for exactly fifteen seconds (I counted.) For the next fifteen minutes and 46 seconds, Damon said the following things:

On the “spectrum of behavior” within sexual assault: “You know, here’s a difference between, you know, patting someone on the butt and rape or child molestation, right?”

On the fact that nobody’s “perfect”: “And we live in this culture of outrage and injury, and, you know, that we’re going to have to correct enough to kind of go, ‘Wait a minute. None of us came here perfect.’”

On how he’s positive “nobody knew”: “Nobody who made movies for [Harvey Weinstein] knew [about the rape allegations.]”

On reading nothing about the Louis CK allegations other than the comedian’s statement: “The Louis C.K. thing, I don’t know all the details. I don’t do deep dives on this, but I did see his statement … When he came out and said, ‘I did this. I did these things. These women are all telling the truth.’ And I just remember thinking, “Well, that’s the sign of somebody who — well, we can work with that.”

On touching a sleeping woman’s breasts as a “joke”:
“When you see Al Franken taking a picture putting his hands on that woman’s flak jacket and mugging for the camera, going like that, you know, that is just like a terrible joke, and it’s not funny.”

Damon brought up a few great points during the interview. He said that every woman he knows could tell a personal story about sexual harassment. He voiced a very real concern that the message being sent to men accused of harassment is “deny it, because if you take responsibility for what you did, your life’s going to get ruined. But if you deny it, you can be in the White House, you can be the president.” But mostly, Damon constantly deflected the idea that sexual assault is enmeshed in our culture and raged against women who are angry that they will be the constant targets of assault and harassment because of that culture.

The actor defended, sympathized with, or distanced himself from every prominent man who has been accused of sexual crimes in the past few months. Weinstein? “Nobody knew”. C.K.? Unfairly punished. Franken? Just joking. Spacey? Cut out of movies as a “business decision;” still a great actor. A hypothetical sexist colleague? “as long nobody’s committing a crime — well, that’s your life, and you go live it.” Women angry about assault? “Let’s all grow together and move on.”

Nobody, not even the angry feminist writing this article, wants their dad or brother or husband’s life to be ruined by an untrue or true sexual assault allegation. Nobody thinks pinching a woman’s butt should have the same consequence as rape. Nobody wants to live in a world where sexual assault is trial by rumor, instead of by jury. Nobody. But the men who are now taking it upon themselves to explain away accusations, deny blame and generally hurry us through this historical moment while covering their tracks by presenting themselves as general “good guys” must stop. Men presenting themselves as voices of reason while tacitly supporting assaulters are standing in the way of a movement.

Many of Matt Damon’s assertions are true and legitimate. But Damon’s main argument in this interview was that accused assaulters are not that bad, social and professional punishments for accused assaulters are unfair, and that women are hysterical. Why are Damon and so many other powerful, likable white men, suddenly such fonts of righteous opinions about the unfair nature of sexual assault accusations?

I don’t remember Matt Damon dedicating the other 47 years of his life to bringing attention to the sexual assaults that happen every 98 seconds in America.

I don’t remember the men I know who are suddenly spewing complaints about due process complaining about the fact that for every 1,000 rapes, 994 perpetrators will walk free.

It’s not enough to say down with Harvey Weinstein.

Down with Matt Damon. Down with all men like Matt Damon, who have never been accused of sexual assault or harassment but use their platforms to keep men safe and women too ashamed to speak out.

Down with men who read harassers’ apologies but not their alleged victims’ accusations.

Down with men who are more worried about other men being unfairly accused than they have ever, ever been about women being attacked.

Down with men who make movies starring only one woman and work almost exclusively with male creatives.

Down with men who talk about “due process” as if the criminal justice system is built to handle rape cases.

Down with men who think that Harvey Weinstein’s alleged extreme actions set a standard by which all other forms of harassment are comparatively not that bad.

Down with men who think there are just “a few rotten apples” out there.

Down with men who are telling women women “have to move on.”

Up with male allies. But down with this kind of man.