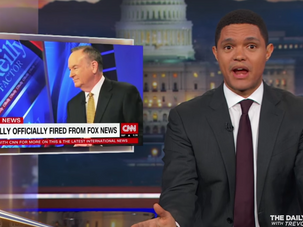 Bloom bragged that she and other women had “slayed the dragon,” referring to O’Reilly’s sacking by Fox New over sexual harassment allegations. 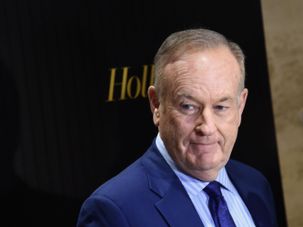 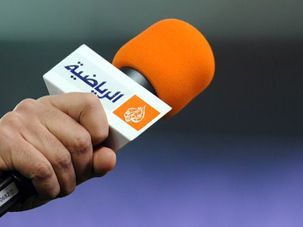 Who's Afraid of Al-Jazeera?

With Al-Jazeera planning its entry onto American TV, Gal Beckerman asks why the backlash has been so fierce and examines the new perspective the channel will add. 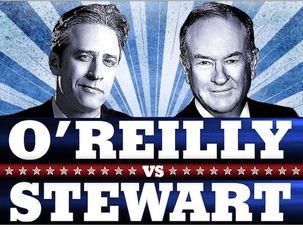 Despite the widespread system failures that deprived thousands of viewers live streaming footage of the Bill O’Reilly vs Jon Stewart smackdown your Forward live blogger was here glued to a computer that was working and plugged in and was live blogging it.

There’s lots to report for those who just can’t get enough news about Natalie Portman. Fans who take a keen interest in the actress’s choice of scripts learned that producer Tom Hanks is eyeing her for a starring role in his movie version of Erik Larson’s bestselling “In The Garden of the Beasts.” Those who appreciate Portman for the political stands she takes noticed that she was sporting a “Women’s Rights” hand stamp as she got off a flight on Wednesday at LAX. She was returning home from New York, where she attended a fundraising event for President Obama. Finally, mommy Natalie was spotted spending quality time yesterday with little Aleph.

Conservative political commentator Bill O’Reilly and late night comedian Jon Stewart will face off next month in a presidential-style debate that will be streamed live on the Web.

If you haven’t seen Jon Stewart’s hilarious Wednesday night report on the aftermath of the Norway massacre, you’re only hurting yourself. He brilliantly skewers the protests of Fox News and the right over the bigotry of the media’s identifying the accused shooter as a “Christian extremist.” There are numerous layers of hypocrisy to peel away, and each one is funnier than the last: It’s bigoted to call Breivik a Christian just because he calls himself one, but the Fort Hood shooter is definitely a Muslim terrorist because he called himself one. Christians in this country are the victims of relentless bigotry by the left, but anyone else who complains of bigotry is playing the victim card. Et cetera and so forth.

Must See TV: O'Reilly Chats Up Jon Stewart, Offers Him a VP Slot, Calls Him a Jew

Here, for your viewing delight, is Jon Stewart’s appearance on Fox News’ “The O’Reilly Factor,” in three parts. The interview ran over two nights, Tuesday, February 3 (Parts 1 and 2 below) and Wednesday, February 4 (Part 3 below).