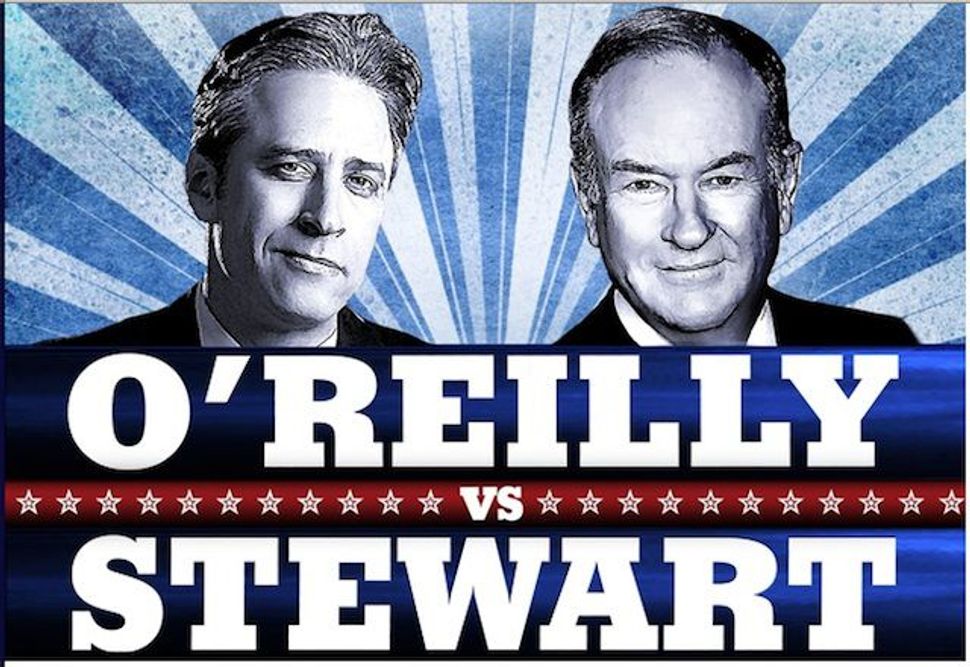 Despite the widespread system failures that deprived thousands of viewers live streaming footage of the Bill O’Reilly vs Jon Stewart smackdown your Forward live blogger was here glued to a computer that was working and plugged in and was live blogging it.

7:45 Tension is mounting as the first entertaining debate of the presidential election beckons. Tall Fox pundit Bill O’Reilly, against small Comedy Central funny man, Jon Stewart. Stewart has promised to have O’Reilly saying Stewart’s “Haftarah” by the end of the event, O’Reilly thinks he’ll be fine without Stewart’s 18 writers helping him out in the background.

7:50 Not to spoil you with too regular updates but, assuming that the internet holds up its end of the bargain, the tedium, mendacity, obfuscation and poor moderation of Wednesday’s debate can be left behind. No altitude sickness, no Big Bird and no votes at stake.

7:55 The debaters are in the auditorium. Repeat, people who care passionately about their positions, who have significant followings and who can speak articulately and entertainingly about the issues that matter in Election 2012 are about to engage in infotainment. They are currently quipping about air conditioning.

8:00 And they’re on stage. Well the moderator is. And E.D. Hill looks less cann-able than Jim Lehrer. A step more lively and in a blue dress that Lehrer couldn’t have gotten away with.

8:05 They’re stretched and warmed up. Here’s the first question. “Are we better off now than before?” O’Reilly first. Air conditioning is all good? He wants to know.

8:11 O’Reilly has comedy card captions, Stewart has a riser, literally, cancelling out O’Reilly’s 6’4.

8:12 It’s already clear that Stewart, though away from NYC, is on home ground. He describes the alternate reality of those who live on “Bullsh*t mountain” and appeals to the mayor of that place — O’Reilly.

8:14 Stewart on the US government’s NPR subsidy. “Give me the money for the Iraq war and you can have children’s television.”

8:15 Moderating debates is not easy.

8:16 Hill asks a new question. “Who is to blame for where we are economically?”

8:20 O’Reilly says that Obama is to blame. $6tn of debt. (Is that how we shorten trillion?) Obamacare makes small businesses scared to hire. It doesn’t matter what Bush did. Stewart says that the rate of deficit (yearly outgoing minus yearly incoming) is coming down.

8:25 Debt is cumulative, deficit is yearly. Get that clear. O’Reilly says that 2007 was the highest tax revenue year ever. More people earning, but paying less each, adds up to more.

8:26 Stewart gets Native American, “We are an entitlement nation. We came to a country that already had a people and said, ‘Yup, we’ll have that.’ We are an entitlement species, but has this President truly changed the relationship between the people and the government… [Banks? Corporations?]… can’t privatize their profits and socialize their losses.”

8:27 O’Reilly: the American nation has a “Zorba the Greek mindset.”

8:28 Stewart takes O’Reilly home, to Levittown. There the housing and the education were subsidized. And when O’Reilly’s father left his company he claimed disability. But, O’Reilly argues, it was private sector, which no one said was improper.

8:29 These two are actually getting close to the ideological chasm afflicting the nation. Free market place vs tax payer security. How we take care of people who need help.

8:35 O’Reilly and Stewart agree that drones are good, waterboarding bad. Surely there’s a longer argument to have about what drones are and what they mean, but maybe not here, now.

8:37 O’Reilly things that US international posture is not forceful enough: Obama wants to have a conversation with the world, they aren’t going to be frightened. “Just double date with Bibi.” Iran might think twice. Going on “The View” does not scare Iran.

8:40 O’Reilly: “There’s a difference between terror and coddling governments.”

Stewart: “Are we talking about Egypt or Libya?”

8:41 Moderator: Benghazi, can we go in without Libyan permission?

8:44 O’Reilly: “I don’t care if Gerry and the Pacemakers attacked the embassy.”

Stewart: G&tP!! Right now your audience is calling my audience to find out how to watch this debate on the internet. G&tP aren’t the right example to use.

O’Reilly: “It doesn’t matter if Lil’ Wayne attacked the embassy!”

Stewart: “You can’t make money in this country selling [crap]?”

8:46 O’Reilly defends the idea of liberal news bias. I.e. he thinks there really is a demonstrable liberal bias at major news networks.

Stewart: “When you have an organization where more viewers believe that the president is Muslim than believe in evolution you have a problem.”

8:48 Lightning round. One minute answers.

8:51 We are only as good as our weakest link. We have to work together to make CNN better.

8:52 The new question: “Should the government be allowed to count calories for us?” Kind of peters out. They already discussed this on The Daily Show in the week.

8:54 Stewart “I’m a Jew. If you think that Christmas isn’t celebrated in this country then walk a mile in my Hanukkah shoes.” Zing!

8:55 “Immigration reform? Why haven’t we been talking about that?”

8:58 Telemundo worked over the President for not implementing reforms in an interview. They both saw it, both thought it good, the president has to answer.

9:00 E.D. Hill, “Should we have compulsory military service?” Is this really a question? Are we really discussing that?

9:01 Stewart wants some military or other service, so people can give back. Got to help the vets when they come back.

9:02 O’Reilly against the draft, we need a professional army. “We should have not gone into Iraq.” They both agree about this, basically.

9:03 New chairs. New questions, from audience. Dean from TN. Away from the podiums, into some really nice white leather chairs. “Corinthian leather,” notes O’Reilly, I bow to his better knowledge of leather. Ongoing jokes about Stewart being shorter than O’Reilly, who donates a spare cushion to the short Jew.

9:05 Stewart thinks there should be a popular vote: “Frustrating to be in a state where there’s more attention, or where there’s none.” O’Reilly thinks there will be a third party which will change the dynamic. Bill likes the electoral college system because “Otherwise LA and New York would control it all.”

9:06 Another new — slightly obscure — question, “If the US was burning which famous person would you save and why?”

9:08 Another new question: “If you were supreme ruler what would you do for the voting system?”

O’Reilly “You have to vote once or you would lose next time… People don’t vote now, you know, Jersey Shore people and the Colbert watchers.” It’s another time that the two of them could probably put forward a number of interesting and pertinent suggestions without really disagreeing.

9:09 Now here’s a subject they don’t agree on: “How would you change healthcare?”

O’R “All should have access but not all should be paid.”

O’Reilly outlines his idea for healthcare based on private insurance companies.

Stewart would decouple it from work, through a single payer system. Frees up employers from insuring employees. O’Reilly doesn’t think the government can do it.

9:10 O’Reilly attacks British and Canada for their healthcare. He uses the invidious stereotype of bad British teeth. [Full disclosure, I have healthy teeth courtesy of Britain’s free National Health Service that treats the health of teeth not the pathology of a nation that needs to see homogenous smiles.]

Surely any American would happily swap US healthcare for British or Canadian healthcare, as long as there’s a provision for those willing to pay for private care (as there is at least in Britain). No?

O’R: Government knows how to run the military because they have practice (since The Revolutionary War!). They don’t know how to run healthcare because they’ve never done it.

9:13 Deborah from Texas: “How can you come together when Congress can’t?” Stewart sits on O’Reilly’s knee!

9:14 William from Michigan: “I understand voting Obama for the first time, but why would you vote for him a second time?”

Stewart: “It’s a race between him and Mitt Romney?!” (first interrobang of the night)

O’Reilly notes, and Stewart agrees with the general sentiment, “Foreign aid isn’t serious money, we need to buy some countries and we do. The taxes Stewart and I pay knocks that down.”

9:19 Stewart: “Would Lincoln be Lincoln today?”

9:20 Q: “Who is the most trusted man in America? Like Walter Cronkite was?”

Stewart thinks that’s not a relevant question. The context has changed, maybe because of Roger Ailes of Fox, but generally because of the 24/7 all-pervasive news cycle.

Stewart wants to ask him — talks to the chair! Says, after end of Eastwood joke, Bill Clinton would be elected. He or Hillary. Even together.

9:22 Stewart keeps calling O’Reilly “Dude.” I don’t think O’Reilly is a dude, he doesn’t think he is, and made a comment to that effect earlier. Stewart’s not making a point, he just can’t stop doing it.

O’Reilly says yes, and it should go to Medicare.

9:24 What does Bill think about Grover Norquist and his pledge to “not raise taxes”? Not much, as it turns out. He prefers Lenny and his bagels.

9:25 New audience question, I lose track of which named but anonymous person asked it. “Would they swap jobs?”

Stewart likes to visit Fox because of the eye of Mordor at Fox and the yearning eyes of the wage slaves that seem to say: “Take me with you!”

Stewart respects O’Reilly’s dress co-ordination, and that: “A man built like a Yeti can move so fluidly.” Vehement disagreement doesn’t and shouldn’t mean not talking to, or even liking people.

O’Reilly: “Stewart tomorrow is going to visit the wounded troops.”

9:29 Final question: “What have they learned from listening?”

9:30 Their closing statements are platitudinous, don’t bear repeating. The audience gives a hand for moderator E.D. Hill. Both debators win. Little has been settled, some things have been learned. O’Reilly distances himself from Fox editorializing, and from the GOP but has a cogent set of points about the form of distributed capitalism he believes in. Stewart jumped on single payer healthcare and more efficient, more accountable, but not smaller government. Plus ca change, but more fun than Denver and — though fact checkers may correct me — fewer lies.