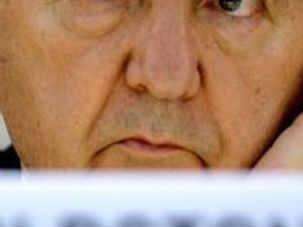 With his New York Times op-ed today, Judge Richard Goldstone continues his long march towards insuring that his name no longer be synonymous with self-hating, Israel-bashing Jew. He has written to argue — from his vantage point of having been a judge in apartheid-era South Africa — that the attempt to label the situation in Israel vis-à-vis the Palestinians as a form of “apartheid” is pernicious and destructive and just plain inaccurate.

A debate about Israel in Greenwich Village, arguably the liberal heartland of the country, can really only end one way: with people screaming at each other. And so it was March 3, at an evening event billed as a “debate” between Brooklyn Congressman Anthony Weiner and former Congressman Brian Baird of Washington State.

Goldstone v. House of Representatives: The Unending Inquiry Into the War Crimes Inquiry

There could be trouble brewing for the congressional resolution (PDF), now circulating for signatures in the House, that condemns the United Nations’ Goldstone Report on alleged Israel and Hamas war crimes in Gaza.

It is not every day that Rabbi Eric Yoffie gets booed by a lefty crowd. But that is one of the risks when standing up as a keynote speaker at the J Street conference.

Why Bibi Is Considering an Independent Gaza War Inquiry. Why Labor Leader Barak Is Against It.

Israel is softening its early hard line against creating an independent commission of inquiry into the army’s conduct during the Gaza war. Typically, though, the debate is being conducted via name-calling and exchanges of invective and ultimatums.