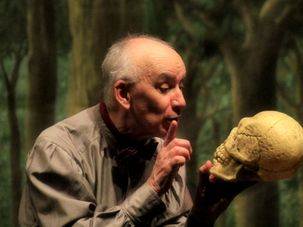 Children are often told they can be anything they want when they grow up; they’re less commonly informed that the same rule applies when they die.

Of Settlements, Boycotts and Political Theater

Watching an actor burst into tears during a monologue, Hamlet marvels at how the performer inhabits the scene so deeply — if only he could evoke such dramatic feelings in real life, Hamlet reasons, he might save his kingdom. Thus inspired, Shakespeare’s hero rewrites the script of a play that dramatizes what’s wrong with his country, and presents it at the royal theater. Hamlet believes he can use the stage to shake-up the state; Israel’s actors seem to have taken the cue. 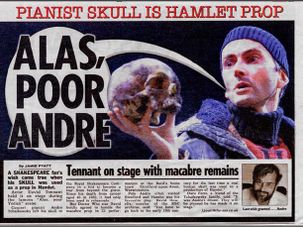 Despite earlier protestations, the Royal Shakespeare Company have admitted that they did indeed use the skull of Jewish pianist André Tchaikowsky in the part of Yorick, for their recent production of “Hamlet.” The Polish-Jewish pianist bequeathed his skull to the Royal Shakespeare Company to be used as Yorick after he died prematurely of colon cancer at age 46 but, until now, no production had the kishkas to do so. Even for this production the theatre (deceptively, as it turned out) claimed to withdraw the skull after it proved a “distraction” to audiences, supposedly replacing it with a plastic replica.