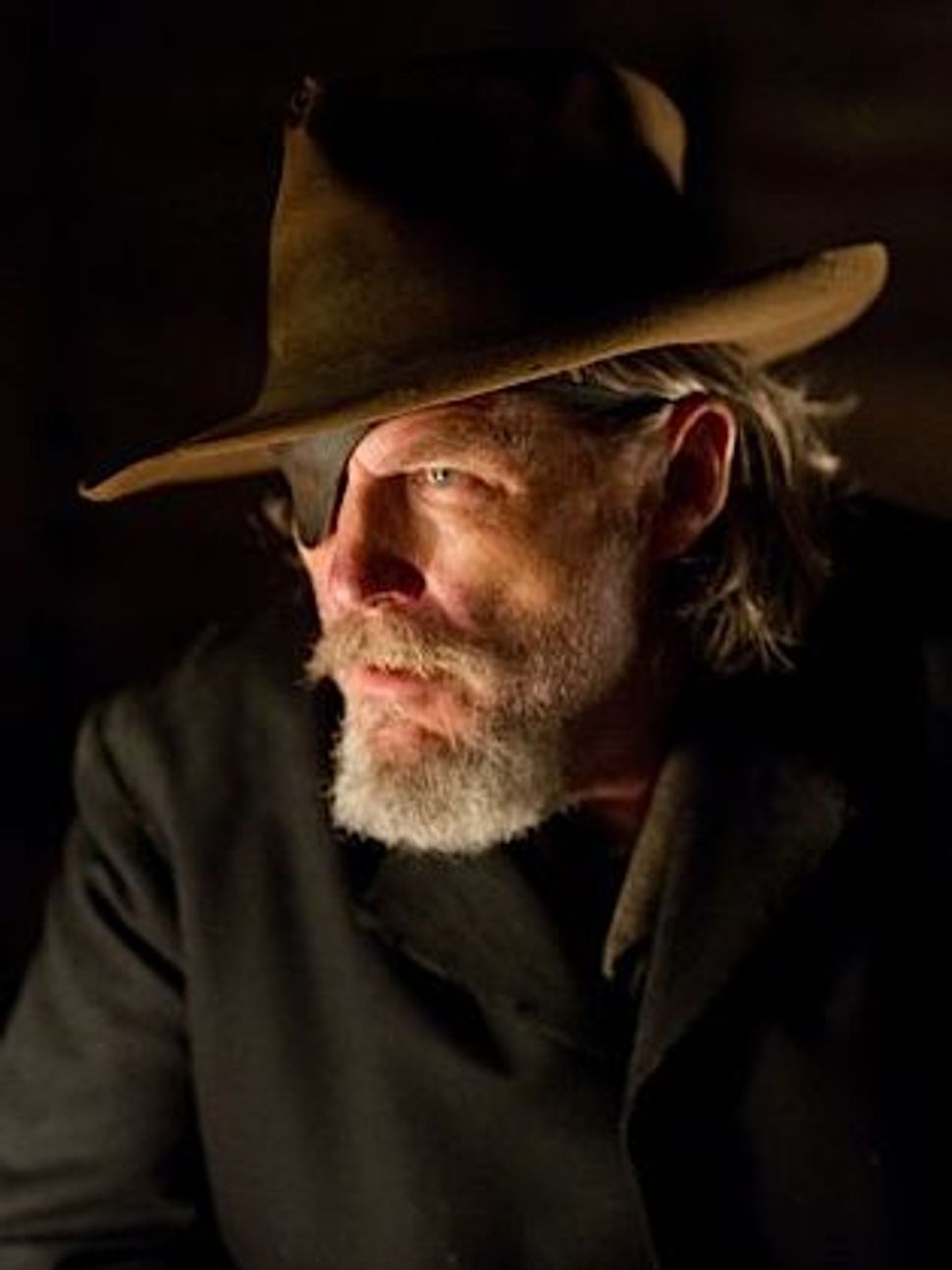 The cinematography, courtesy of long-time Coen collaborator Roger Deakins, renders the murky fireside chats and snow-swept terrain (New Mexico passing as Oklahoma) deeply stunning. Lost, however, are the sort of vistas we associate with the classic Western tradition to which “True Grit” belongs. Perhaps it’s a function of the film being kicked along by its formidable script. But apart from a few striking shots — Bridges backlit, shot from a low angle, waving his pistol against the expanse of the sky; Bridges framed in the entrance to a mine shaft, waving his pistol against the encroaching darkness — “True Grit” squanders its potential as a procession of indelible images.

Then there’s the issue of the film’s central conceit, which exceeds its feigned concern for the plot, or its fealty to the thematic boilerplate of the Western: Jeff Bridges’s turn as federal marshal Rueben J. “Rooster” Cogburn, the role made famous by The Duke in 1969. Described as “a pitiless man and double tough,” Rooster Cogburn is the kind of protagonist the Coens relish. Which explains their attraction to this remake. Like the combed-over Nic Cage in “Raising Arizona,” the unblinking Peter Stormare in “Fargo,” and Javier Bardem’s mushroom-cut psychopath in “No Country for Old Men,” Bridges belongs to the Coens’ stable of hardnosed grotesque anti-heroes, his unruffled booziness situated somewhere between his own turn as Jeff “The Dude” Lebowski and M. Emmet Walsh’s indefatigable private dick in “Blood Simple.”

Bridges turns in the kind of performance that begs critical acclaim, nimbly slurring through the script’s verbal hoops and period-parlance curlicues. As Cogburn, Bridges prattles on and on, mumbling about ex-wives and the décor of certain saloons. But the rest of the film’s function as a backdrop for this performance is clear. Just like the 1969 original played out as a bid to net John Wayne an Oscar — similar to how sports teams kick around aging, undecorated star players in hopes that they may land on a championship team — “True Grit’s” function as an award-baiting star vehicle is as plain as the eye patch on Rooster Cogburn’s weathered brow. It’s the “Hamlet” of Westerns. Bridges can chew through the role — doing John Wayne doing Wallace Beery — but cannot draw into it. His performance, and its utility in recasting recent-Oscar-winner-as-grisly-sunvabitch, nags more than it impresses. Even his delivery of the would-be iconic final line, “I’ve grown old,” lands with a thud, followed as it is by a cartoonish whimper.

Interestingly, though, it’s Bridges’s stumbling that pushes the others to the fore. Newcomer Steinfeld’s ability to wrap her mouth around the Coens’ mercurial dialogue and her remarkable range (especially in a key scene that sets her against Brolin) proves her to be “True Grit’s” actual dramatic center. And ditto for Matt Damon as tag-along Texas Ranger LeBeouf (a role originally played by country-western superstar Glen Campbell), whose debut performance with the Coens makes him a welcome addition to their gang of regulars. Supporting performances from Brolin (judiciously exploiting what little screen time he’s afforded) and Barry Pepper (also excellent in this year’s “Casino Jack”) provide sufficient insurance against Bridges’s habitual slips into exaggeration and parody.

So is “True Grit” worth seeing? Sure. It’s a fine film. But fine seems workmanlike from filmmakers who were out-and-out brilliant as recently as last year’s “A Serious Man.” “True Grit” isn’t likely to excite the way the Coens’ best films have, but as an excuse for the filmmakers and their principals to dress up and play cowboys, and for the two-headed director to edge closer yet to the epicenter of mainstream Hollywood filmmaking, it’s a thoroughly enjoyable Wild West show.

Watch the trailer for ‘True Grit’: