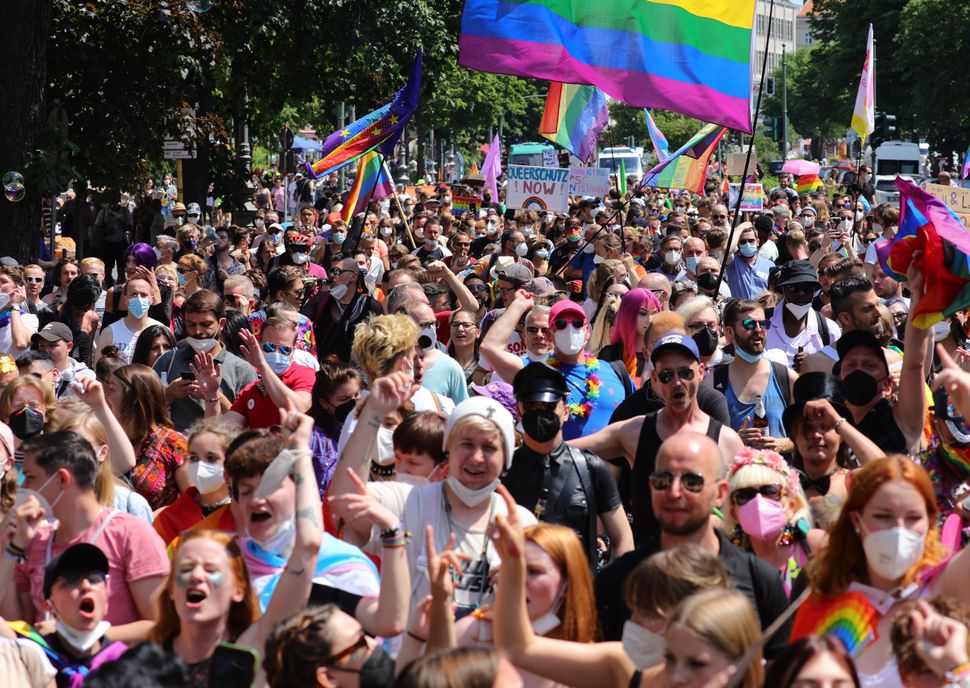 Participants in the Queerschutz Now! (Queer Protection Now!) march in commemoration and celebration of Christopher Street Day on June 26, 2021 in Berlin, Germany. By Omer Messinger/Getty Images

If an American reader had glanced casually at the front page of the Forward on May 7, 1933, they would have had no idea that one of the most pivotal events of the early Nazi regime had occurred the day before.

No, it wasn’t the decision of Adolf Hitler’s Justice Department to allow for the firing of Jewish employees — that was there.

It was the arson of the Hirschfeld Institute, where the sexologist Magnus Hirschfeld and his staff provided groundbreaking care for LGBTQ people, including by offering some of the first modern gender affirmation operations.

In burning the Institute, the Nazis continued their escalating persecution of Jews: Hirschfeld, along with some of his most prominent collaborators, was Jewish. But the event, one of the Nazi party’s first major book burnings, also marked an upsurge in the Nazis’ persecution of Germany’s LGBTQ community.

You might think an event of such magnitude — the life work of a major Jewish scientist destroyed, thousands of books, many by Jewish writers, publicly burned — would warrant front-and-center coverage by the American Jewish paper of record. And while it’s difficult to say whether and when that coverage might have ever appeared — our Yiddish archives aren’t currently digitally searchable — it’s striking that the fire wasn’t immediately positioned as major news.

That’s something of a theme when it comes to significant events of LGBTQ history in our archives.

The first national march on Washington for LGBTQ rights: Not front page news.

As Chana Pollack, our archivist, recently wrote, there is a rich history of LGBTQ Jews to be found in our pages, amid all the notable silences. And there are lessons to be learned from what we chose to give greater prominence in our coverage. Particularly in the wake of the Holocaust, headlines on days when major events in LGBTQ history might also have contended for coveted front page slots show repeated preoccupations, including Israel, security for Europe’s remaining Jews and Holocaust remembrance.

It’s easy to imagine generations of past editors making those decisions, their perspectives shaped by the gaping wound of the Shoah and the fragile hope presented by Israel.

And it’s a poignant reminder: For all of us, sometimes the story we don’t think to look for is the one we most need to see.

Below, we’ve reviewed the front pages that ran at momentous times in LGBTQ history, to give a sense of what stories made the cut — and the urgency of those that didn’t.

The day of and after the arson of the Hirschfeld Institute, the Forward was preoccupied by developments in Nazi Germany. 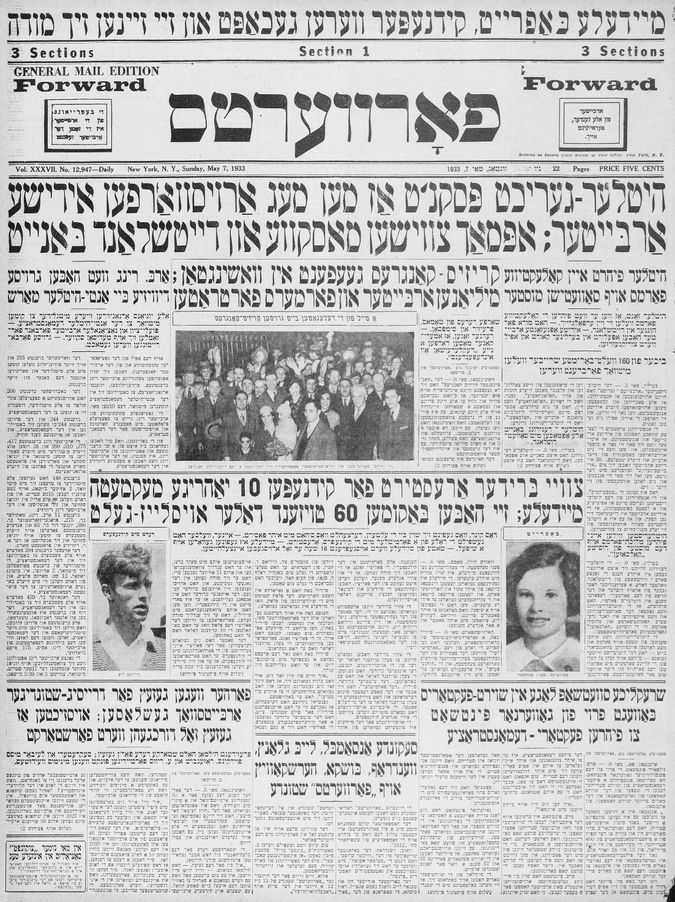 The Forward’s front page of May 7, 1933. By Forward Association

“Hitler suddenly permits open debate in newspapers for and against persecuting Jews,” read one headline; “Germany will lose World Athletic Games if German Jews aren’t permitted to participate,” another.

The Depression also figured prominently: “Crisis conference opens in Washington; millions of workers and farmers represented,” the front page announced on May 7.

In the winter of 1917-18, Hart, a doctor, tuberculosis researcher and novelist, became the first American known to undergo gender affirmation surgery as a trans man. But in his lifetime, his story was largely unknown to the American public: Even The New York Times failed to note his passing in 1962, when he died from heart failure. 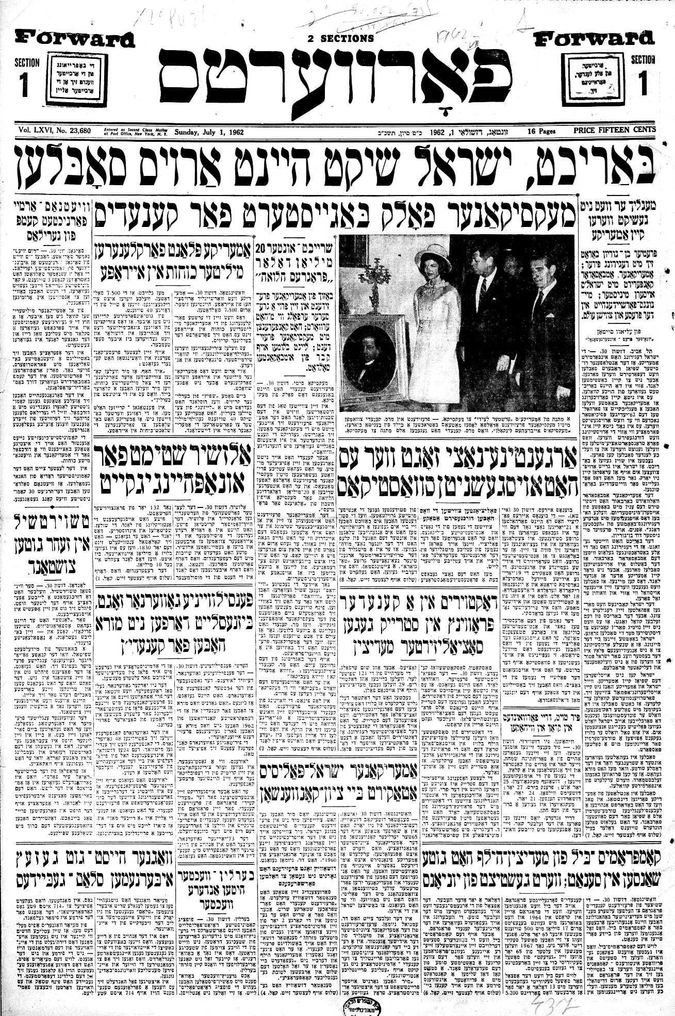 The Forward’s front page of July 1, 1962 By Forward Association

On the day of Hart’s death, the Forward’s front page was internationally-minded. The lead story, “Report says Israel will extradite Soblen today,” delved into the complicated saga of Robert Soblen, a convicted Soviet spy who fled the U.S. when faced with a sentence of life imprisonment and unsuccessfully sought asylum in Israel. The day’s other lead headlines: “Mexicans thrilled by Kennedys,” “Argentinian Nazi reveals who carved the swastikas” and “Algiers votes for independence.”

It looked innocuous: a small group of people, dressed in suits and ties, assembled outside the White House.

Except the group was protesting the government’s practice of blacklisting LGBTQ people from government jobs — an act of advocacy the likes of which had never previously occurred. The Forward’s front page of April 17, 1965. By Forward Association

That day’s coverage didn’t hint at the fact that domestic history was being made. “Jerusalem believes something’s changed for the better,” read one vague headline. An obituary for the Forward writer M. Osterovich, dead at 78, was prominent; so, more ominously, was a Washington report that the Soviet Union was building missile bases “near Hanoi.”

The Stonewall Riots, began in late June, 1969; the last of ended in the early hours of July 3, 1969. Like many other newspapers of the time, the Forward didn’t treat the event as particularly significant. 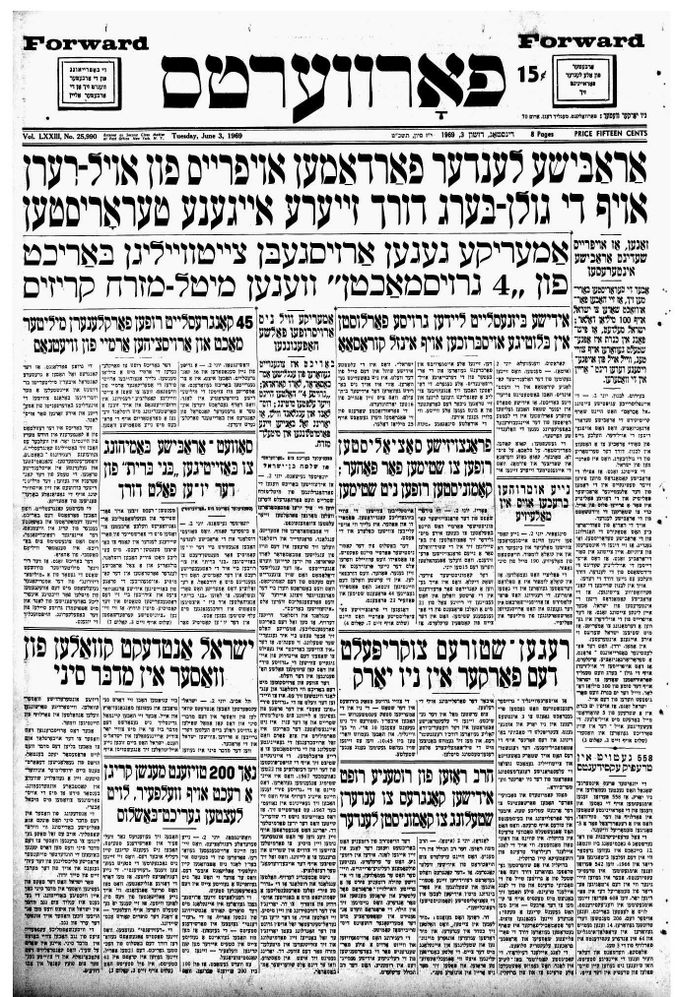 The Forward’s front page of July 3, 1969. Courtesy of Forward Association

Instead, it focused overwhelmingly on events in Israel: the paper that day was led by the story “Arab countries condemn destruction of oil refineries in the Golan Heights by their own terrorists.” Interestingly, an uprising overseas, in Curaçao, gained front page attention where Stonewall did not. As a strike by oil workers escalated, the Forward reported “Jewish business holders suffering major losses in bloody outbreak on Curaçao island.”

A year after the police raid that sparked the Stonewall uprising, Pride got its start with the Christopher Street Liberation March, which inspired similar celebrations of queer identity in other major American cities. 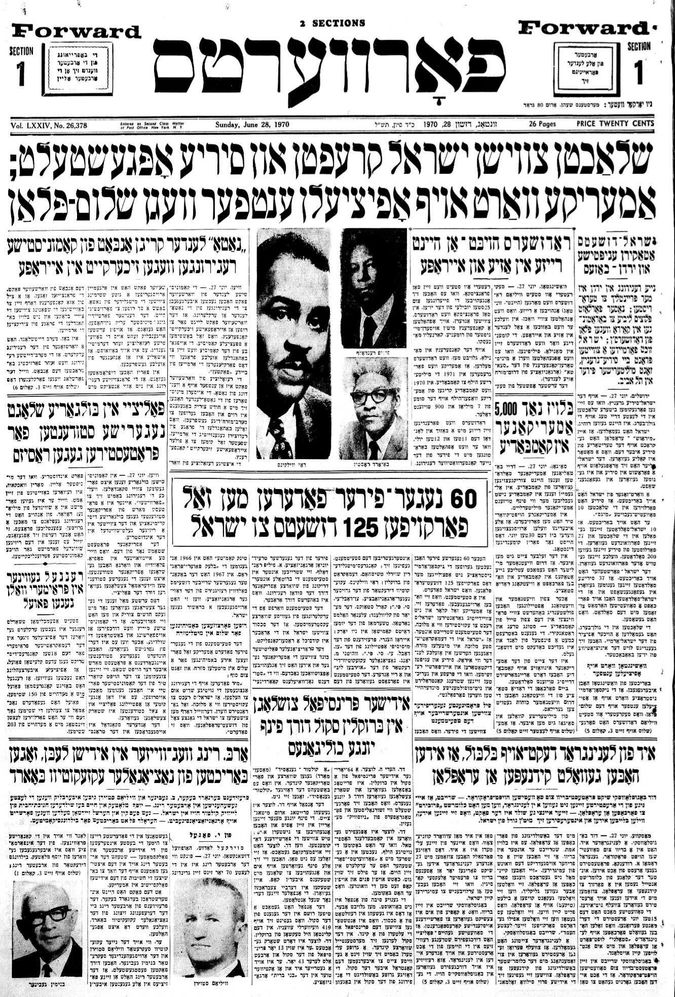 The Forward’s front page of June 28, 1970. By Forward Association

The Forward’s eyes were, once again, on Israel. The lead story, “Fighting between Israeli forces and Syria ceased; American waiting for official response about peace plan,” was followed by another about demands by 60 Black American leaders that jets be sold to Israel. The concerns of European Jews were also prominent: “Nato lands receive offer from communist governments about security in Europe,” the paper reported.

October 14, 1979: The National March on Washington for Lesbian and Gay Rights

The first national march for LGBTQ rights drew an enormous crowd: Between 75,000 and 125,000 people participated. Yet while the Forward’s interests that day were also political, the march didn’t make a splash. 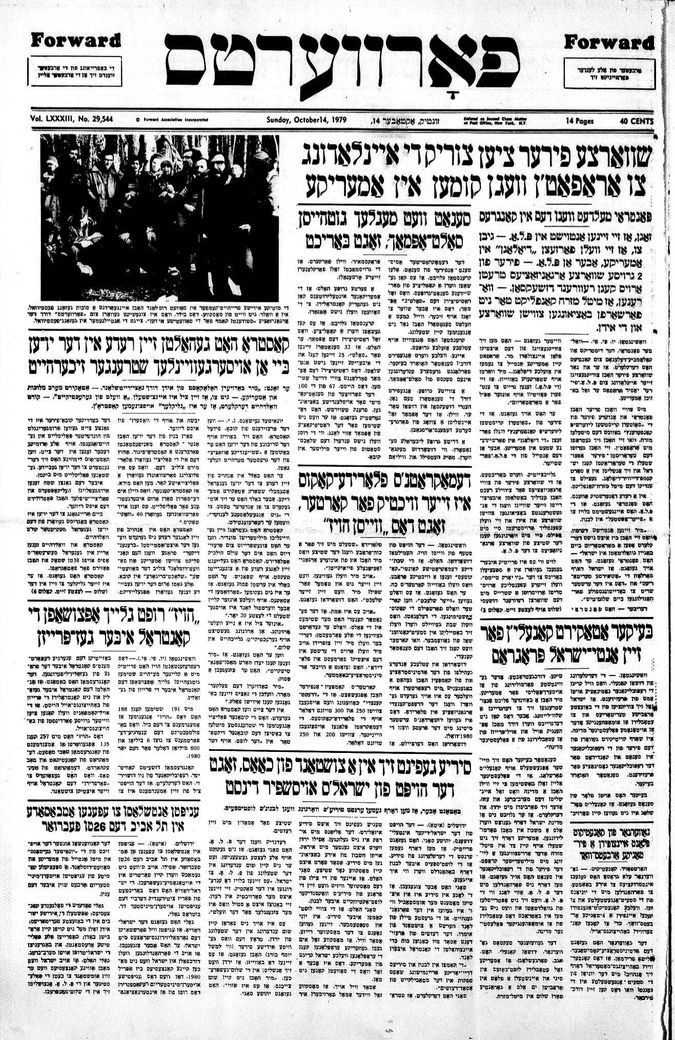 The Forward’s front page of October 14, 1979. By Forward Association

By the last major headline of the day, it seemed like the paper had confronted a dearth of interesting material, despite the historic event shortly scheduled to occur: “Florida Democratic caucus is extremely important for Carter, says White House,” we reported.