To Fight Radical Islamic Terror, Europe Must Move From Gestures To Action 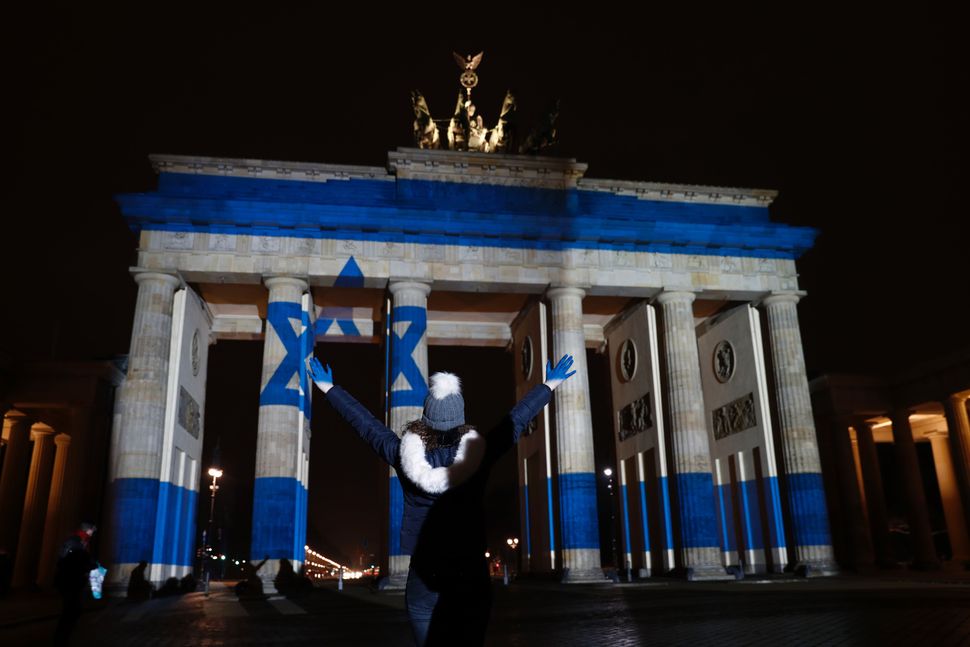 Brandenburg Gate, one of the most recognizable landmarks in the world, once the scene of mass Nazi rallies, emblazoned with swastika flags, was this week lit up with the flag of the Jewish State of Israel. Who would have thought in their lifetime, or even in the space of eighty years, this would ever happen?

In Paris, the City Hall likewise reflected the flag of the State of Israel and even in Rotterdam, where significantly, the Mayor is Muslim, the Town hall flew Israel’s flag at half-mast.

All this was to show solidarity with Israel in the wake of the Palestinian terror attack in Jerusalem this past Sunday, which claimed the lives of 4 young Israelis.

Let there be no misunderstanding, these are very powerful, meaningful and historic gestures, which may be signaling a historic change in Europe’s relations with Israel.

The vehicular terror attack in Jerusalem was not new to Israel, and has become a common modus operandi for Palestinian terrorists pioneered during the wave of terror here during the past two years.

It is however a relatively new to Europe, where in the last six months, both Nice and Berlin have suffered major terror attacks when Islamic terrorists plowed through large crowds of people, murdering almost 100 innocent people combined.

In the wake of these attacks, as well as number of others that have hit Europe over the past two years, Israel has unequivocally stood with our European allies in solidarity.

That solidarity however, had not always been repaid. On Sunday, that appeared to change.

Until now, many across the world, particularly Europe, applied a double standard to when Israel was faced with terror, as compared to other Western nations. In many cases, there had been a perverse sense of justification, seeking to blame or excuse the terror on the “occupation” or calling into question Israel’s response, with claims of ‘excessive action’, “extrajudicial killings” or calls for “restraint”.

But not on this occasion. Leaders from across the world, including Europe and even the new UN Secretary General, issued swift messages of support with Israel and unequivocal condemnations of the terror attack. Even the labeling it as an act of terror has by no means been guaranteed in the past when terror has struck the Jewish state. There were no calls for “restraint” or “calm” on this occasion, and no attempts to delineate the area as “West” or “East” Jerusalem.

Slowly, but surely, in the wake of the wave of Islamic terror across Europe, our European allies are beginning to display a greater sense of empathy to Israel’s situation, recognizing that whether it is Nice, Berlin or Jerusalem, we face the same global jihadist threat, which will only be defeated through our determined joint effort and solidarity.

Even Angela Merkel, the Chancellor of Germany and Francois Hollande, President of France, have now identified Islamic terror as the biggest threats facing their countries. Until only recently, they were reluctant to even use these words in the same sentence.

A discernable change is happening, not only in highly symbolic gestures such as flying Israel’s flag in solidarity with the victims of the Jerusalem terror attack, but in the statements from European leaders, in increased counter-terrorism cooperation, sharing of intelligence and EU officials seeking to learn from Israeli experts how we deal with the threat of terror.

But much more can and ought to still be done.

We must move beyond, however symbolic and well-meaning gestures, to more tangible actions.

This includes supporting Israel at multilateral forums such as the U.N., instead of voting for one-sided resolutions against the Jewish state, tying our hands in this very fight against terror.

It includes not applying one standard to Israel and a different one to other Western nations when faced with similar attacks.

The EU can also play a very important role in helping promote peace between Israelis and Palestinians, but it must be a more honest broker, and this includes not singling out the Jewish state and turning its back to Palestinian terror and incitement. It must make sure to hold the Palestinian Authority (PA) and terror groups like Hamas to account, noting also that not only has the PA not condemned the Jerusalem terror attack, but Mahmoud Abbas’s Fatah party has actually praised it, while in a sickening act of display, Hamas celebrated it in Gaza by handing out candy.

The EU should make this unequivocally clear at the upcoming Paris Peace Summit on Sunday, while calling on the PA to enter into immediate, sincere and direct negotiations with Israel. Peace will only come through Jerusalem and Ramallah, not via the United Nations and Paris.

Seeing the Israeli flag proudly adorning the Brandenburg Gate this week, it was impossible not to be moved.

It is only be realizing that whether we are in Germany, France, Israel or elsewhere in Europe, we face the same Islamic jihadist threat, which in order to be defeated will require our joint effort and solidarity. This change will not happen overnight, but as circumstances of the past week have demonstrated, we are heading in the right direction.

Arsen Ostrovsky is the Executive Director of The Israeli-Jewish Congress (IJC).

To Fight Radical Islamic Terror, Europe Must Move From Gestures To Action