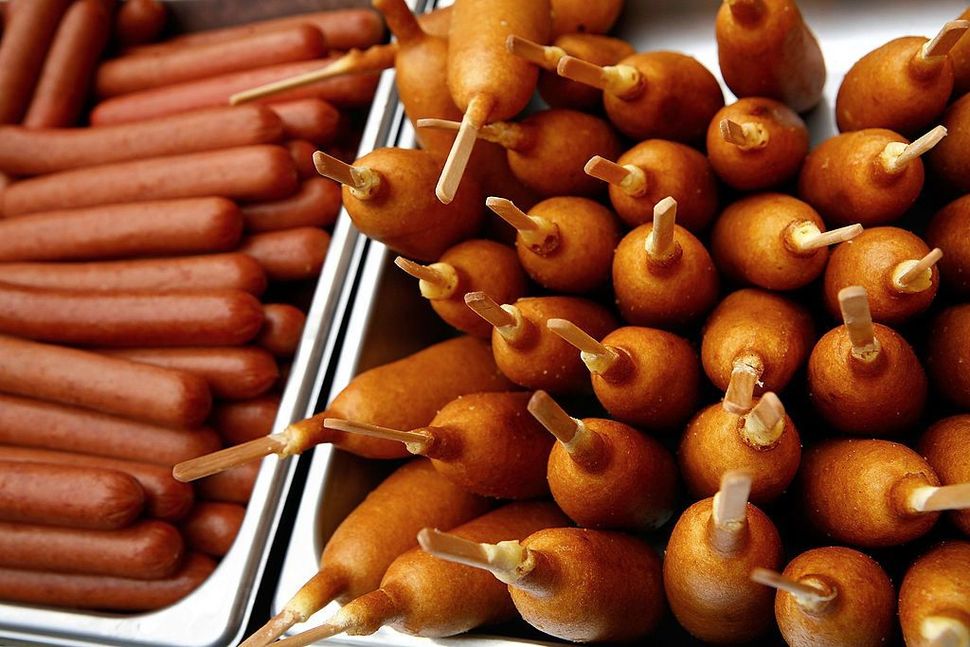 My grandfather was a butcher. And though he has long since passed, I recall his passion for service and his love of animals, even though he thought that his obligation to the world was to use their flesh as food. The juxtaposition of a benign, kindly man flaying the flesh of an animal, their blood and sinew seeping onto the linoleum floor, transmuting their fat and muscle into the stuff of delicatessens and hors d’oeuvres for family gatherings, has not been lost on me. Today, I pursue animal welfare work as a matter of course with my duties as an Orthodox rabbi and a social justice activist.

In truth, I think of my grandfather often when engaging in both lines of vocation. None more so than last week, with the news that recently-introduced national slaughterhouse policies in Paraguay would phase out the use of the shackle and hoist method by the end of 2017 in their regular course of operation after undercover footage brought daylight to these disturbing practices. While the shackle and hoist method of slaughter is singularly brutal, why should a rabbi care about Paraguayan abattoir regulations? Because Paraguay is among the largest exporters of kosher meat to Israel, and while Israel bans the shackling and hoisting method within its borders, guidelines on the books are being enforced within Israel but are being ignored by Israeli authorities in foreign establishments outside of the country. And, unfortunately, imported beef in Israel today is the rule, not the exception. It is a lamentable statement on the kosher meat industry that the demand to satiate the taste for cheap steak, veal, and other products has created a cycle of deprivation, suffering, and extraordinary cruelty to innocent creatures.

What was once the purview of family or small-farm-owned operations has grown into an almost unstoppable behemoth of callousness towards God’s creatures. Industry officials have taken the position that kosher consumers would rather ignore the actuality of animals being mistreated as long as meat is cheap and available. They view their role as only improving accessibility to their “product.” This position is as religiously offensive as it is morally unsustainable.

Certainly, as the Jewish population of the world hungered for more readily available meat, kosher slaughter followed the trend of the non-kosher meat industry towards massive industrial production methods, with animals existing for months or years in the bleakest conditions before the trauma of a sharp slice across the jugular followed by being hung upside-down to bleed to death. Acknowledging the contemporary reality of kosher slaughter has been difficult for me as an Orthodox rabbi. The commitment to the timeless ritual of keeping kosher is central to Jewish survival and continuity. And while I ceased eating meat years ago after learning about the brutalities pervasive in the industry, I’m still heavily invested in improving conditions for the animals who can’t escape the slaughter plant, and for the workers doomed to labor inside such houses of horror. The existence of so many wrongs weighs on my soul.

Kosher consumers who wish to return the industry to a more accountable scale — an ever-growing number — should be agitating for change. The American kosher industry will continue to import meat from Uruguay and Argentina (and other major exporters) where shackle and hoist is continuing unabated if kosher consumers keep purchasing it, but the time when meat conglomerates can obfuscate the truth of their practices is coming to an end. Frankly, the elevation of bottom lines over Godly respect for animals should bring about greater communal introspection about our sacred duty as stewards of the earth.

The move by Israel to pressure foreign suppliers to abide by world animal welfare standards, however, shows the start of a sea change towards humaneness. American kosher consumers must go further.The publicizing of abuses to the wider world, not simply the Jewish community, and the growing awareness of health and ethical concerns linked to meat consumption has engendered a demand for greater transparency, third-party audits for animal welfare, and more plant-based alternatives to animal products. After all, why accept any violence against animals when there are perfectly suitable, healthier, animal-free options available to us?

In the midst of celebrating Passover, I’m reminded of a story about Yisrael Salanter, the nineteenth century Lithuanian rabbi and founder of the mussar movement, who was asked to certify a matzoh factory. After inspecting the factory at great length, he declined to certify the factory as kosher because of how the workers were treated. They were overworked without respite or care. This ethical reason was reason enough for Rabbi Salanter to deny a much-needed kosher certification. Such a commitment to ethical concerns, while technically separate from the kosher laws themselves, shows that supplemental but vital moral mandates have always been interwoven with ritual laws. Indeed, when we don’t remember that we are here to respect and cherish the works of the Divine, we concede our moral primacy as human beings. Hopefully this is not so, and kosher consumers’ will move towards more concern for animal welfare which will impact all corners of the meat industry.