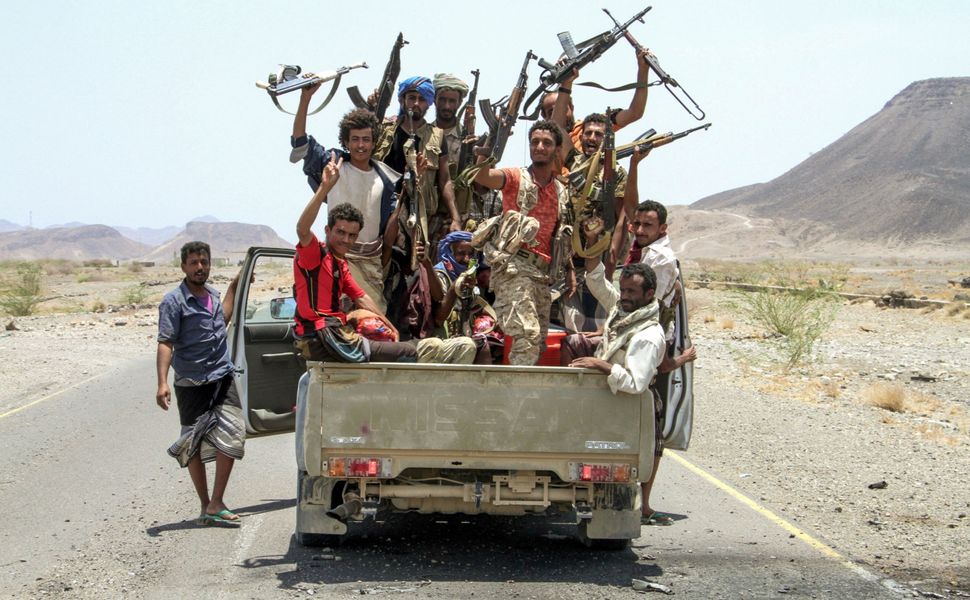 Yemeni fighters loyal to the Saudi-backed Yemeni president pose for a picture in the back of a Toyota pickup truck, raising their machine guns on April 15, 2017. Image by Getty Images

One of the year’s most crucial resolutions is about to go to a vote in the United States Congress, and the American Jewish community is missing it.

For all of the conversations and debates in our community about Middle East issues, we rarely hear a word about Yemen. The most impoverished Arab-majority country, Yemen is plagued by widespread food insecurity, an enormous internal displacement crisis, a cholera epidemic, a persistent terrorism problem, and a brutal civil war. A coalition of Arab states, led by Saudi Arabia and backed by the US, routinely bombards Yemeni civilian targets in an inept effort to restore the government of President Abd-Rabbuh Mansour Hadi to power after a previous president, Ali Abdullah Saleh, joined forces with the Houthi militia to stage a coup in 2014. Today, June 8, 2017, the U.S. Senate will vote on a resolution of disapproval (S.J.Res.42) of a major arms sale to Saudi Arabia, which would furnish the Saudi regime with advanced munitions for use in Yemen. In a matter of days, the House will vote on a similar resolution (H.J.Res.102). As American Jews, we must act in support of these resolutions of disapproval and against the arms sale.

We must act for two reasons. As Jews, we have religious obligations that compel us to act for the preservation of human life. And for those of us who regard Israel’s security as a matter of paramount importance, this arms sale embodies everything against which we have long fought. As both ethical human beings and as activists committed to defending the Jewish State, we cannot miss this crucial Congressional decision.

It is incumbent upon all Jews to place pikuach nefesh, the preservation of human life, above almost everything else. The Talmud teaches us that to save one life is the equivalent of saving the entire world. How can we reconcile this crucial theological concept with silence in the face of America’s role in Yemen?

According to UNOCHA’s recent report, 10.3 million Yemenis (out of a total population of 27.4 million) are in acute need of humanitarian aid as a combined result of the war and a US-backed blockade with a history of preventing humanitarian aid from entering Yemen (meanwhile, Saudi Arabia has also raised the possibility of attacking the key al-Hudaydah port and further stemming the aid flow). 14 million people are food insecure, and more than 3 million have been displaced, in many cases by Saudi bombardments conducted with American munitions. The death toll of the conflict has passed 10,000, with US-backed forces killing more than any other faction. Every 10 minutes, a Yemeni child under the age of five dies of preventable causes.

Human Rights Watch has traced bombs used in Saudi war crimes in Yemen back to the United States a number of times. One particularly egregious incident was the Saudi use of US-manufactured bombs to strike a funeral in the country’s capital, killing 140 people. Other targets have included weddings, markets and hospitals. As Jews, we must speak out against an American decision to scale up its role in this mammoth humanitarian catastrophe.

American Jews’ stake in the Middle East, however, is not limited to our universalist humanitarian values. The majority of American Jews care deeply about Israel, and its security in a tumultuous region is central to our thinking. We should be concerned, then, by a deal that has drawn criticism from such major Israeli political figures as Defense Minister Avigdor Lieberman, Energy Minister Yuval Steinitz (a Likud figure close to Prime Minister Benjamin Netanyahu), and Yesh Atid Chairman Yair Lapid.

Lapid commented on the specific danger of Saudi ties with terrorist organizations — indeed, both al-Qaeda in the Arabian Peninsula (AQAP) and the Islamic State (Daesh) are operating in Yemen. Whether intentionally or not, the Saudi-led coalition, by generating chaos, fostering anti-American sentiment, and arming and funding fighters with probable links to AQAP, has allowed such extremist groups to thrive and expand.

As always, however, the crux of the conversation about Israel’s security is not extremist groups like Daesh: it is Iran. Saudi Arabia frequently uses the claim that Yemen’s Houthi militia is an Iranian proxy force to justify requests for American aid, including this latest arms deal. But although Iran does support the Houthis with minor training and small weapons assistance, American backing for the Saudi-led coalition is only entrenching Iran’s foothold in the Arabian Peninsula. The Houthis, unlike (for example) Hezbollah, are not a long-standing Iranian client, but rather an independent, local Yemeni faction. Their gradual move toward Iran over the past couple of years has been driven largely by American backing of the Saudi-led coalition, which has rendered the Houthis unable to stand their ground without foreign support. As Bruce Riedel, Director of the Brookings Institute Intelligence Project, pointed out in an interview on the “Brookings Cafeteria” podcast, the Houthis only “flirted with the Iranians” before the war, but are on track to become “fully partners with the Iranians” if the current trajectory continues. Katherine Zimmerman of the American Enterprise Institute in February argued that “Iranian influence remains less than the Saudis claim” over the Houthis, but that US support for the Saudi-led coalition “is likely to drive Yemeni rebel factions even further under Iranian control.” For members of the Jewish community who have, for decades, lobbied to keep Iranian expansionism in check, it should be a priority to minimize American support for the Saudi-led campaign in Yemen so that the Houthis never become dependent on Iran and do not turn into Hezbollah’s cousin on the Arabian Peninsula.

For all of these reasons, both ethical and strategic, majority-Jewish foreign policy organizations across the political spectrum have expressed skepticism of this arms deal. The American Israel Public Affairs Committee (AIPAC) published a carefully worded memo saying that the deal “raises serious policy concerns.” J Street, which usually disagrees with AIPAC on policy matters, released a statement a few days later, going so far as to endorse S.J.Res.42 and H.J.Res.102, condemning the US-Saudi deal. Even the far-right Zionist Organization of America warned that the deal was dangerous. Rarely do American Jewish organizations dealing with the US-Israel relationship come so close to a broad consensus. Yet the American Jewish community as a whole has failed to channel that opportunity for across-the-board cooperation into a serious effort to oppose the arms deal.

It is time for us to act. Jewish Members of Congress, and any others who value ethical humanitarianism and Israel’s security, should vote in support of S.J.Res.42 and H.J.Res.102 and against America’s decision to ink the biggest arms deal in its history with Saudi Arabia. American Jews, out of our devotion to piquach nefesh and our horror at the massacre of Yemeni civilians on the one hand, and our love and appreciation for our siblings in Israel on the other, must fight this dangerous arms deal.