Should Israel Be Cozying Up To Iran? 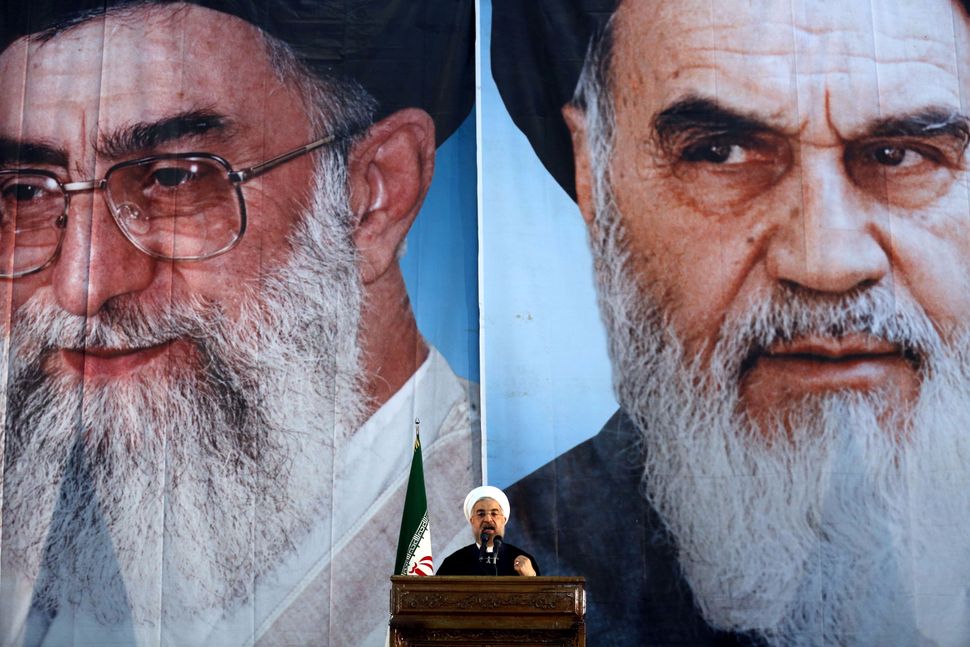 One of the most prominent arguments for a two-state solution between Israel and the Palestinians is that it would integrate Israel into the regional fabric and create a new alliance between the Jewish state and the remaining Arab states of the region that have no diplomatic relations with it. Already, Israel has shown tacit approval of many Arab and Muslim nations blockading Qatar, and Defense Minister Avigdor Liberman has claimed that Jerusalem is “closer than ever” to securing a peace agreement with the Palestinians.

Benjamin Netanyahu, the Prime Minister of Israel, has suggested an “outside-in” approach, where Arab states make small agreements or even establish full relations with the Israeli government and put pressure on Ramallah to seriously negotiate a two-state solution. It appears that U.S. President Donald Trump many months ago on The Times of Israel, expecting full relations between Israel and its neighbors — whether the Arab countries at large or the Palestinians more explicitly — may be an unrealistic and undesirable goal.

Prior to 1979, the Alliance of the Periphery was central to Israeli foreign policy. In Africa, Imperial Ethiopia, with its Christian majority and significant Muslim minority, was central to this alliance. In the Middle East, this alliance linked Israel with the Muslim-majority yet secular states of Iran” from Jews by the regime of Recep Tayyip Erdogan. While Israel maintains healthy relations with Ethiopia and is expanding its outreach and involvement with other African and developing nations, it is obvious such an Alliance of the Periphery will not rematerialize anytime soon.

And yet, Israel and the Jewish people share far more in common with our non-Semitic neighbors, the Turks and the Persians, than we do with our “cousins” on Israel’s immediate borders. While all three countries have seen an uptick in religiosity in recent years, they are also the most secular countries in the Middle East (especially in Israel’s case). Israel and Turkey remain close partners of the West (as Iran was until 1979) for reasons other than oil and hosting military bases, as is the case in the Arab World. Israel is a democracy, and Iran and Turkey have some semblance of basic democratic models, even if elections are not free and fair. All three nations are also politically stable, despite a restive population within (Kurds in Iran and Turkey, Palestinians in the case of Israel) that cause a great deal of grief for the governments in Jerusalem, Ankara, and Tehran. Turkey, however, has embraced Islamism is on a path towards continued autocracy—-much as Iran was in the late 1970s.

Obviously, there are irreconcilable differences right now between Jerusalem and Tehran. Iranian leaders have repeatedly encouraged chants of “Death to Israel”, refer to the Jewish state as the “Little Satan” (America is the “Great Satan”), and have stated that their goal is to “wipe Israel off the map and the annals of history”. It’s continued funding of terrorist organizations such as Hamas, based in the Gaza Strip, and Hezbollah, based in Lebanon, pose a strategic threat to Israel, with hundreds of thousands of sophisticated missiles that can strike just about any major Israeli population center. The Islamic Republic also bankrolls the regime of Bashar al-Assad, one of Israel’s biggest Arab rivals, and continues to abuse human rights and commit war crimes on an extraordinary level. It is because of this threat that Israel has made common cause with the traditional foes of its government—the Arabs. Just as Israel faces Iranian-backed threats on its borders, so, too, does Saudi Arabia. Its blockade of Qatar was in part because the small peninsular nation has dealings with the Iranian regime. During the Arab Spring, Iran supported the Shiite protests in neighboring Bahrain, prompting a massive Sunni military intervention to “restore stability” in the small Gulf island-nation. In Yemen, Tehran funds and arms the Houthis, a tribe of the Zaydi sect of Shi’a Islam, which is involved in a rebellion against the Yemeni government. This prompted a massive Saudi-led intervention in that country to drive out and destroy the Houthi militants. With the two Semitic populations of the Middle East sharing a common enemy, they have learned to covertly cooperate on tackling the Iranian threat and temporarily put aside their differences regarding the Palestinians.

And yet despite this new shift in relations between Israel and its Arab neighbors, there is still no reason that if (ultimately when) the Tehran regime of crazed ayatollahs is toppled, that true coexistence can take root. Over a century of Nazi-influenced (and subsequently Soviet-backed) propaganda about Jews being responsible for every ill in the world, whether economic collapse, colonialism, or war, has rendered most of the Arab World’s inhabitants utterly incapable of accepting the legitimacy of a Jewish state anywhere in the Land of Israel, let alone living in peace with it. The corrupt theocratic and monarchial systems that govern half of the region have “values” that are at odds with Israel’s democratic character — and harsh but secular dictatorships, such as that in Egypt, are often the only way to contain extremism and terror, to some extent, that would otherwise be directed at Israel and Jews worldwide. Even among populations that fled the Arab World for Europe or other Western countries, anti-Semitism and anti-Zionism is still quite present.

Moreover, much of the Islamist narrative (and even the narrative against less religious peoples of the region) is nostalgic about, and wishes to return to, a “golden age of Islam”, when Arabs embarked on a colonial adventure out of the Arabian Peninsula and into Iran, the Levant, and North Africa, suppressing and mistreating millions of indigenous peoples in the region, such as Kurds, Berbers, Black Africans, Assyrians, and Jews. It is impossible to see how an Arab World that embraces this vision to a large extent could ever live peacefully beside a small Levantine country that is a safe haven for a minority that has long been persecuted, and that is a champion of native rights by merely existing and fighting off numerous attempts to destroy and subvert that country once and for all. By contrast, Iran and Israel in Egypt that draw millions of tourists — the backbone of the Egyptian economy — to that North African state. Where the Saudis and their Pakistani allies spread Wahhabism, the destruction of ancient sites followed—one example would be the Bamiyan Buddha statues in Afghanistan by the Taliban. And while both Israel and Iran seem to celebrate the diversity of their countries (even if Iranian Jews or Israeli Arabs do face discrimination to some degree), the Arab World continues selling Black Africans as slaves and mistreating Asian migrant workers, while denying citizenship to Kurdish people and persecuting the Amazigh (Berber) population of North Africa. In an era where many Westerners are increasingly critical of their government’s ties (both political and economic) of such human rights abusing nations, it wouldn’t be surprising if the establishment of relations between Israel and its hostile neighbors prompted a similar level of disdain within elements of Israeli society, even as others would no doubt feel relief and ecstatic about ties being established after decades of regional isolation and war. And there’s also the threat of such countries only establishing a temporary peace, in the hopes that as Israel relaxes and finds itself at ease, it could mobilize and overwhelm the Jewish state eventually.

Israel’s increasing ties with the Arab World should instead be seen as a “means to an end” among officials in Jerusalem, and elsewhere. An alliance with the so-called “moderate Sunni Arab states”—states that are not moderate at all, but just aren’t officially al-Qaeda or ISIS—may be beneficial in taking out shared threats like Iranian proxies or Sunni extremist organizations, but cannot coexist until there is a major reformation in the Islamic World in terms of Israel’s right to exist and liberal democratic values. There is no reason to celebrate relations with a number of dictatorial and extremist countries that have long peddled racist and threatening propaganda against Israel, or funded terrorist organizations. The hope and goal should be that, under the leadership of a more assertive and hawkish Britain and America, a formal or informal coalition of Israel and Arab states can destroy or degrade Iran’s proxy network, known as the “Axis of Resistance”, and dismantle terrorist organizations of the Sunni variety as well. With the decline of Iranian influence and power, and a possible tightening of sanctions directed at the Islamic Republic, it’s likely that the Tehran regime will fall, sooner or later. Due to Iran’s highly educated population and relative secularism in comparison to many surrounding states—indeed, Iran is the least anti-Semitic country in the Middle East — some moderate form of government could emerge out of the ashes of the “revolutionary” mullahs that have governed the country since 1979. It would behoove Israeli and Western leaders to welcome such a moderate country, with shared interests and goals, into the international community and press the brakes on any acceleration of ties with radical Arab nations.

Should Israel Be Cozying Up To Iran?