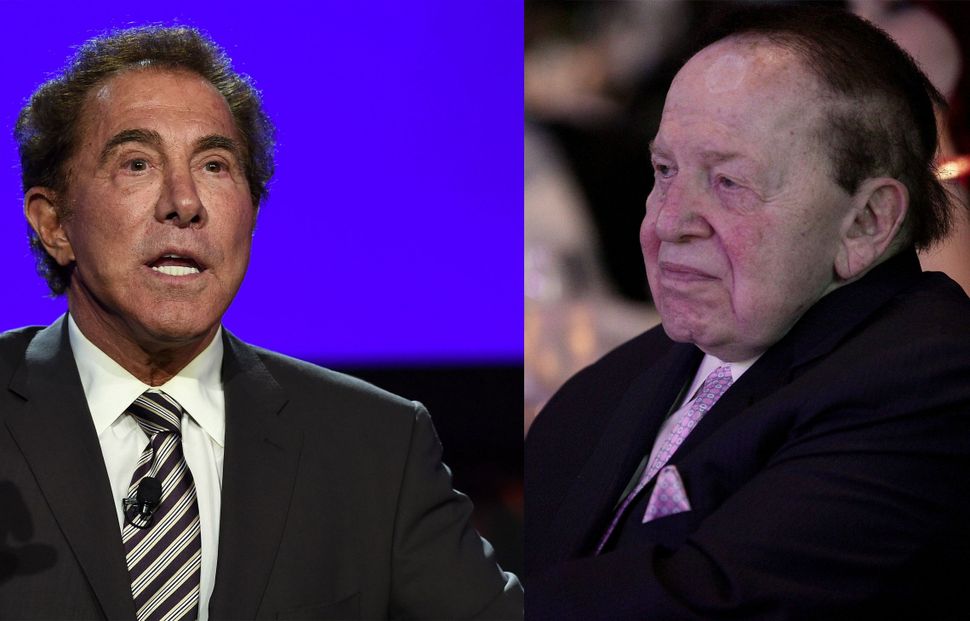 A break-in occurred at the office of Senator Dean Heller, a Republican representing Nevada, on Saturday, July 15. Heller is a crucial swing vote in the current and chaotic effort to pass the Senate health care repeal bill. Apparently, a threatening note was left in his office as well.

This Watergate-esque news comes as little surprise — Heller has been targeted ever since he first expressed his opposition to the GOP-backed healthcare legislation. Major players in the constant and escalating smear campaign against him have unfortunately, included two internationally prominent Jewish figures, Sheldon Adelson and Steve Wynn.

Two weeks ago, I was saddened and frankly, embarrassed to read that Adelson and Wynn bullied Heller, who had honorably stood his ground against the extremely unpopular rewrite (according to a June 28 NPR/PBS NewsHour poll, just 17 percent of Americans support the legislation).

Of the original five GOP detractors, Heller was the only one who stated that his opposition was based on concern for the vulnerable. For the other four, the bill was not conservative enough.

As the New York Times reported on June 30, following a vicious advertising campaign launched against Heller, both Adelson and Wynn (the finance chairman of the Republican National Committee) eagerly did President Donald Trump’s bidding and contacted Heller in what sounds like nothing less than very personal, very aggressive harassment.

“Both billionaire donors are close to Mr. Trump, a fellow tycoon,” states the Times article. “Mr. Adelson played a pivotal role in Mr. Trump’s election, showering Republican groups last year with tens of millions of dollars. Mr. Wynn…oversaw a fund-raiser on Wednesday at the president’s Washington hotel that Mr. Trump said had raised about $7 million for the party committee and his re-election campaign.”

Obviously, their staunch support of a philanderer who bragged about grabbing women by their private parts, dodged the draft three times, was thrice married with admitted adultery, withholds his taxes, pulled out of the global climate accord, serially breaks promises, grossly offends world leaders and sinks to the lowest level of online behavior is disturbing enough.

But especially given that they both grew up in poverty, it is simply unconscionable for them to turn their backs on the 22 million Americans who would be kicked off health care.

I was reminded of Bob Kraft’s recent comments at the Cannes Film Fest where, in what the Boston Globe called “words of wisdom,” he said that Trump’s economic plan “will be excellent for America and the Western world.” That wasn’t enough.

“One of my big concerns is that people like ourselves have done well, but working-class people have not,” Kraft continued in his defense of the president. “It behooves us to get government working together to take care of them and get them the proper health care.”

Let’s just say that the myriad of on-site comments were, pretty unanimously, none too flattering. Many were trolls for sure, but sometimes trolls’ unmitigated thoughts have a distinct ring of truth.

Huge (duly named and accredited on buildings) donations to Jewish causes from among these three men’s billions do not negate following, in words and actions, our Biblical precepts.

Proverbs 14:31 and 31:9 state: “He that oppresses the poor blasphemes his maker, but he that is gracious to the poor honors God,” and “Speak up, judge righteously, Champion the poor and needy.”

Often in these days, despite the fact that Trump lost the popular vote by 3 million, those of us who care deeply about the planet we live on and the poor and disenfranchised, who adhere to the belief that every human being was made in God’s image, and who try our best to follow the best of Judaic precepts feel that we are alone on a deserted island.

Yet with July 4 just behind us, Founding Father James Madison’s words that “In Republics, the great danger is, that the majority may not sufficiently respect the rights of the minority” seem apt, as does Samuel Adams’s quip that “It does not take a majority to prevail… but rather an irate, tireless minority, keen on setting brushfires of freedom in the minds of men.”

But Sholom Aleichem said it best: “Life is a dream for the wise, a game for the fool, a comedy for the rich, a tragedy for the poor.”

Adelson’s and Wynns’s actions are both the ultimate in greed and the ultimate abandonment of Jewish values. And with his sycophantic clinging to Trump’s apron strings, Kraft appears more clueless than these gambling moguls, but is nonetheless as dangerously mistaken.