A Month After Charlottesville, A Synagogue Lay Leader Reflects On The Shabbat Of Terror 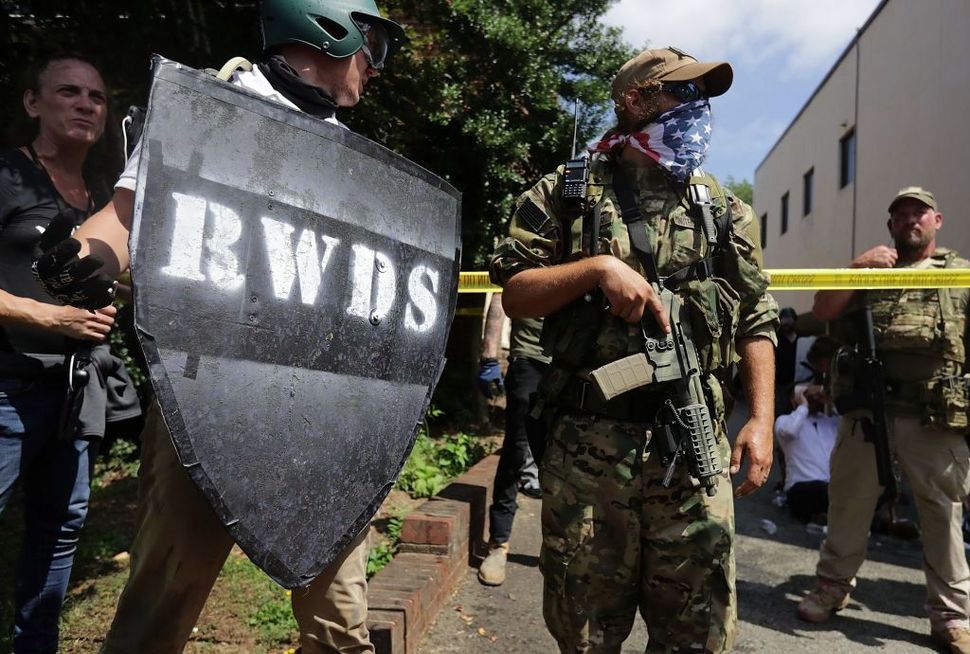 As a darshan and occasional maftir of our lay-led, traditional egalitarian Sabbath services here in Charlottesville, Virginia, I am often struck by the immediacy of the Torah and haftarah texts. Sometimes Moses and the Prophets ascend from the mundane to the eternal; other times, their words reach down and touch the present.

Like Sabbath celebrants around the world, on August 12, the morning minyan at Congregation Beth Israel, in Charlottesville, read aloud in Hebrew from the Torah portion Ekev or “Because“ (Deuteronomy, 7:12-11:25).

Unlike our fellow countrymen, we chanted “How beautiful are your tents, O Jacob” at an uncomfortable intersection of American politics and the history of our people.

Stonewall Jackson’s statue stands one block east of our synagogue on Jefferson Street — at Fourth Street N.E., near the courthouse. Not long ago, the courthouse park benches afforded an uncrowded spot to take a bag lunch (sunny in winter, shade in summer).

Robert E. Lee astride Traveler occupies the top of a grassy knoll two blocks west of the synagogue, across Second Street from the Historical Society and the Public Library, built on the original site of Beth Israel. This contested park between Jefferson and Market Streets, with its easy access to the Downtown Mall, has served as a campground for the homeless, and a place to play chess or music. This prime location also has featured such events as a chocolate expo, and the Annual Festival of Cultures.

That Saturday, services began an hour early, so we might worship and depart the synagogue before the scheduled demonstrations began at noon in the two parks with statues of men on horseback. The congregation climbed the stairs of the main sanctuary on Jefferson Street, past a security line to enter through the only unlocked door.

During prayers, we heard the thump of helicopter rotors, crowds shouting and, from the windows outside the sanctuary, I watched groups of armed, uniformed neo-nazis file down the Third Street sidewalk.

In Ekev, Moses asks Israel: What does the LORD your God require of you?

In his “Kuzari: An Argument for the Faith of Israel”, the Andalusian exile Hebrew poet Judah Halevi answered that rational law, which demands justice, good actions, and recognizes God’s bounty, rules every community. The Torah is corollary to rational law. Without Israel’s knowing how, the Presence descended and God’s fire consumed their offerings. Israel heard God speak, heard the story of their becoming a people— all matters which reason would refuse, unless affirmed by observance. “Is it enough,” Halevi asked, “for Jews to practice doing justice and love mercy? Can they neglect circumcision, Sabbath, and other laws, and still feel happy?”

Following the Torah portion and before the scroll was returned to the ark, we heard Isaiah 49:14-51:3, a Haftarah of consolation. This day, although the blessings were chanted in Hebrew, the selection was read in English.

After services, we gathered in the hall adjacent the main sanctuary to sing the customary verses instructing Israel to keep the Sabbath; prayers were spoken over wine and bread, and the Rabbi announced that “the Torahs have been removed to a safe place.” The congregation left the house of learning in small groups.

With my wife and two friends, we walked along Fourth Street back to the car. Our view of Stonewall Jackson was obscured by the crowd. Some wore message t-shirts, some wore camouflage, one was dressed as Captain America. Many carried weapons. As we waited at the red light, a pick-up truck with rolled-up tinted windows honked, several times. Hard to tell who belonged to whom.

Driving home on Ninth Street, I saw six men and one woman get out of a white van. Dressed in black body armor and Darth Vader helmets, they unloaded assault rifles, batons and shields from the back of their van. All wore sidearms.

While I in the back seat recalled anti-war marches from the sixties, from behind the wheel Sam the frequent Shacharit talked about his days as a police cadet in Colorado thirty years ago. I was angry and afraid. None of us wanted to pick up a gun.

How then to speak about the unspeakable, in credible language when reason refuses and politics fails? A pointed question in the little city of Thomas Jefferson, the slaveholder writer of the Bill of Rights, whose Monticello was purchased by Commodore Uriah Levy and restored by his nephew, New York Jewish congressman Jefferson Monroe Levy.

At the end of his consolation in the Haftorah, Isaiah offers first this:

Look, all you who kindle fire,

Depart in the flames of your fire,

by the flares you ignited.

By my hand, this for you:

where you lie down is terror.

And, because a Haftarah must conclude with a blessing, the prophet closes with this instruction:

Hear me, you who pursue justice,

who seek the LORD:

Look to the rock you were hewn from,

the pit where you were quarried.

Look to Abraham your father,

and to Sarah who bore you.

Only one when I called him,

I blessed him, and made him many.

For the Lord comforts Zion

comforts all her desolations;

Joy and pleasure are found in her,

thanksgiving and the voice of song.

Native New Yorker Laurance Wieder had his adult bar mitzvah in Charlottesville at age 65. An independent scholar, editor and teacher, his many books include Words to God’s Music: A New Book of Psalms; Perek Shirah: A Chapter of Song; and the just completed oral text After Adam: The Books of Moses.

A Month After Charlottesville, A Synagogue Lay Leader Reflects On The Shabbat Of Terror