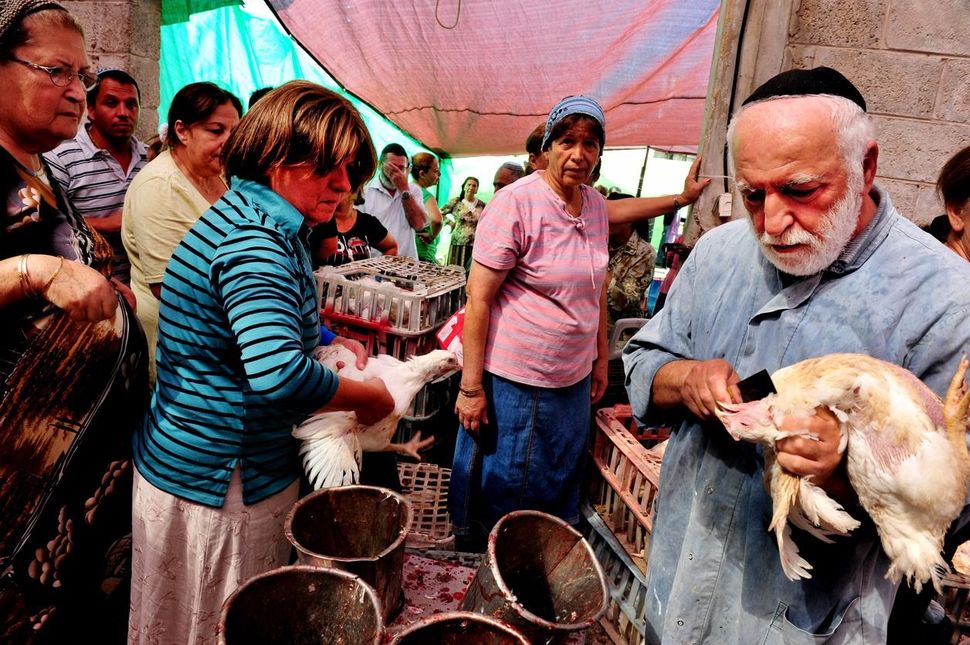 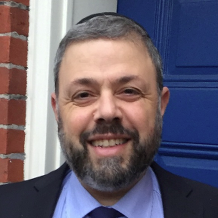 Kapparot is a customary Jewish atonement ritual practiced by some Jews between Rosh Hashanah and Yom Kippur. Traditionally, a person waves a chicken around his or her head and recites a penitential text. The chickens are then donated to the poor.

In Tur Orah Haim, laws of Kippur (chapter 605), we find the following discussion:

“Some communities have the tradition to slaughter a rooster to atone for one’s sins. The Geonim of Babylonia, who were asked about the practice, answered that while it seems that the rooster is a symbolic substitute for the sinner who should have died, they do not know why it is a rooster and not any other animal. They then offer three possibilities:

• Roosters live in the house (thus sharing their fate with humans).

• There is no need to insist on using roosters, and indeed, wealthier people use a ram.

• The Hebrew name for a rooster is גבר — a man.

The cantor puts his hand on the rooster’s head and places it on top of the head of the candidate for atonement. He says: ‘This is instead of that; This replaces that; This takes away from that’. He then circles the rooster above the man’s head and says some verses from Psalm 107, adding the words ‘נפש תחת נפש’ — a soul for a soul. He repeats the verses three times, and then places his hands on the rooster’s head, in the manner used for a sacrifice in the Temple, and slaughters the rooster. It is customary to give the rooster to the poor to atone for one’s soul (by doing charity), and to throw the intestines on the roof to feed the birds (of prey).”

• The practice smells of paganism.

• One is not allowed to perform a ritual which resembles a sacrifice in the Temple.

• Giving the rooster to the poor is insulting, suggesting that they consume the sins of the giver.

Indeed, Rabbi Yosef Karo, in his commentary Bet Yosef, writes in the name of Rashba:

“Though I heard from God-fearing people from Germany that all the rabbis in their country follow that practice, I have stopped it in my community, and Nachmanides forbade it because it is a pagan practice.”

“The practice of slaughtering a rooster for each male should be stopped.”

If you are interested in a concrete conclusion you do not to read further, just know that conducting Kapparot with birds is forbidden because of its resemblance of pagan magic and beliefs. If you want to do Kapparot, use money and give it to charity.

Historically, however, this did not happen in most places. The practice continued to flourish and develop, and was extended from males only to the whole family. As women were added, someone suggested that hens should be used for women and roosters for men. Later, there was a concern that a pregnant woman would not have full coverage, and so people started to use three birds for a pregnant woman: one hen for her, and a hen and rooster to cover for a male or female fetus (Thank God for sonograms!). One commentator even suggested that five birds should be used, three females and two males, in case she is carrying twins, but concluded that such pregnancies are not common.

Other elements were added that pushed the practice towards mystical realms. It was told about Rabbi Yaakov Mullen (aka Maharil, Germany 1360-1427) that he would use only white roosters, to suggest that the blood-red sins turn white as snow. Later generations defended that practice which seemed to attribute magical powers to a white rooster, by saying that Maharil would not search for it, and would only choose it from among other birds when available. His disciple, R. Yaakov Weil, wrote that the initials of the Hebrew formula recited over the rooster’s head forms the word חתך- which is the name of the angel of life. Finally, it was R. Yaakov of Emden (aka Yaavetz, Germany 1697-1776), who composed a Kabbalistic introduction to the Kapparot and included it in his Siddur (prayer book):

“I am about to perform this atonement and heal its root in the supreme world. May it be Your will that this hour, in which a thread of mercy is amplified, will become a time of kindness and compassion. And in the merit of slaughtering this גבר, the five rigors which are the foundation of man will be sweetened, as they connect to the holy feminine world… through which our souls are born. Rebuild our Temple and let us send away the scapegoat, and we will sacrifice goats to sweeten the rigor and strength of the queen.”

It is amazing, and worrisome, to see how a practice takes a life (or better yet, death) of its own, and is transformed from folklore into a mystical practice with extensive Halakhic literature. Second, the analogy Yaavetz makes between the rooster and the scapegoat is intriguing, as it is based on the understanding that the scapegoat would carry away the sins to the desert to get rid of them. This is based on Midrashic interpretation, but I would like to suggest that the purpose of confessing the sins of the whole nation over the goat’s head and sending it to the desert was meant to convey the opposite message.

The scapegoat, which according to the Torah roams free in the desert, represents the idea that though we repent for our misdeeds, we never know the full extent of their impact. Years after our repentance, a wrong move or word could still cause negative reverberations.

Thus, the most important lesson of Yom Kippur, and of the scapegoat, is not that I can cast away all my sins with a goat, a rooster, or some coins, but rather that I should always be aware of my actions, preempting a transgression or a wrongdoing, as well as their far-reaching and incalculable consequences.