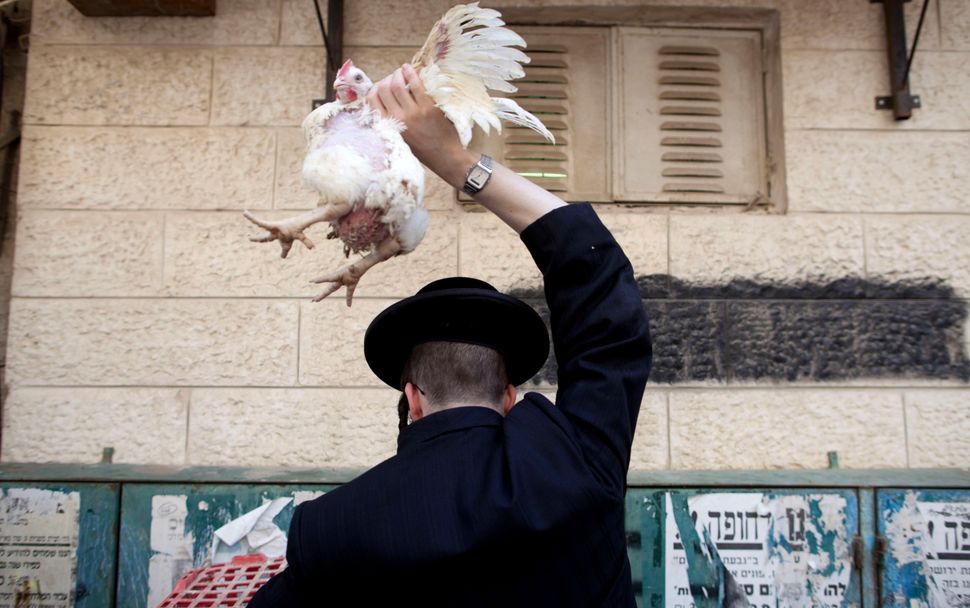 It’s 5777, and it’s time to change the conversation about Kapparot.

Next week, in the day or two before we observe Yom Kippur, we’ll hear about or participate in the long-standing Jewish folk tradition that attracts explosive debate over its use of live chickens: Kapparot, or Kapporos, a ritual practiced by some Jews in which live roosters are swung overhead (and killed) to atone for one’s sins. There is no requirement to practice Kapparot according to most rabbinic authorities, but it is nonetheless practiced in some observant communities as an “exchange” of sins from the person to the chicken. In a typical ceremony, the chickens are held one at a time and rotated in a circle above the head of the person participating in the exchange. The chicken is then slaughtered according to typical kosher laws and is intended for charity.

Outrage pours in from Jewish and non-Jewish fronts because of the stressful ways that chickens are sometimes handled—held by their wings or upside-down by their legs—and because larger Kapparot events that involve trucking in thousands of chickens from farms to metro areas like Los Angeles and New York City have been the culprits of major animal neglect and public health concerns in the past.

Articles that respond to these concerns by claiming that Kapparot events somehow teach empathy for the animals we eat are simply unpersuasive. Judaism has a long and proud tradition of compassion for animals—the ancient rabbis called it tzaar baalei chayim (“do not cause unnecessary Kapparot’s critics as hypocritical out of a belief that the chickens used in Kapparot somehow lived a better life than the billions of chickens that languish on America’s factory farms.

While Kapparot originated in a society where factory farms did not exist, today the overwhelming majority of the chickens you see in these ceremonies—likely upwards of 99%—are bred and raised in the same conditions as the chickens Americans eat on a daily basis. Criticism of Kapparot can and should open up discussion about a much larger question: are we going to spend another year tolerating the suffering we collectively support on factory farms?

For Jews, this is the season where we ponder the control we have over our actions. If we don’t like the troubled dynamics in our relationships, then we have a choice—continue on this road and live to regret it, or change. The High Holy Days, of course, affirm the human potential to change—to turn ourselves around, to do teshuvah or repentance.

One of the more damaged relationships we have as Jews, and collectively as Americans, is with the chicken. The vast majority of chickens today are genetic hybrids that have been bred to match our production needs at the expense of the birds’ welfare.

Today’s meat birds grow three times as fast as the birds our grandparents raised. Trapped in unnaturally large bodies their legs cannot support, they suffer unnecessary and painful problems with skeletal development, heart and lung function, and obesity. Laying hens fare just as badly and are routinely crammed into spaces tighter than the surface area of an iPad per bird for their entire lives.

Yet, at the same time, we are increasingly recognizing the surprisingly sophisticated cognitive abilities of birds like chickens. And Americans are increasingly viewing chickens as the sensitive, emotional beings that Jewish tradition has long regarded them to be. For example, consider the Massachusetts ballot initiative in this election cycle that would curb the use of intensive animal confinement. A similar law went to effect in California just this year.

So, let Kapparot be a starting point for this important conversation instead of an occasion for more mudslinging (we have the election for that). At the Jewish Initiative for Animals, we encourage and are happy to see traditional events that publicize the use of money at Kapparot, like this one happening in LA on Sunday. But even more, we urge everyone—Jews and non-Jews—to look more deeply at the systemic problems of our poultry industry. Together, we can make a much bigger difference for animals and public health by committing to killing and consuming fewer, or zero, factory farmed birds throughout the new year.

Yadidya Greenberg serves as the Kosher Meat & Animal Welfare Specialist at the Jewish Initiative for Animals, where he works to help increase access to and popularity of higher welfare kosher meat products. He teaches about his experience as a shochet and animal advocate to audiences throughout the United States.