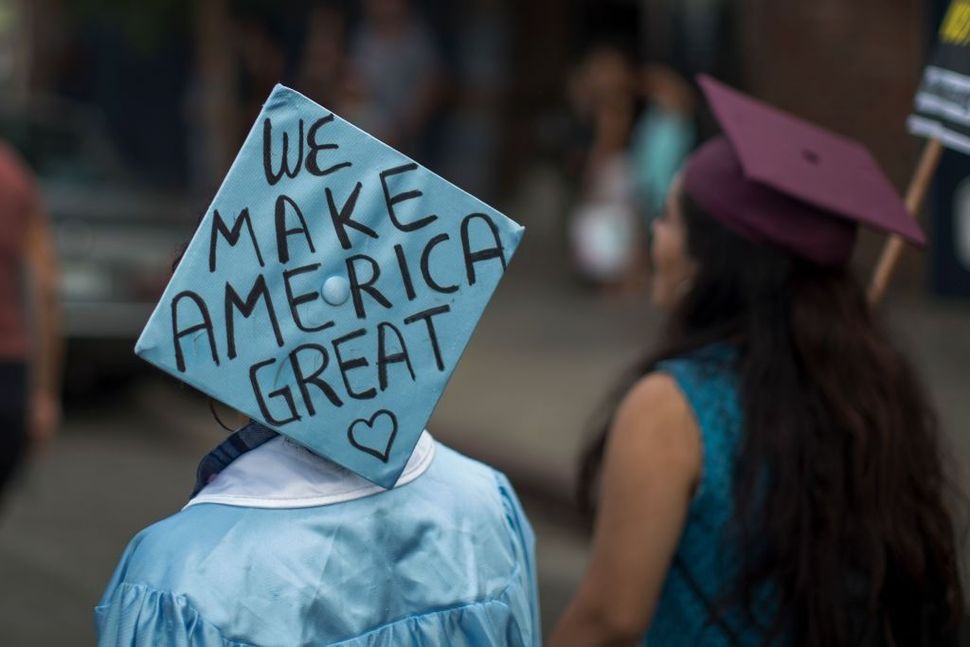 I first met Maria Cruz a little over two years ago at an Einstein Brothers Bagel Cafe on the campus of Augsburg University in Minneapolis. At the time, I was starting an academic fellowship at Augsburg’s Sabo Center for Democracy and Citizenship. My project was to research and analyze how the Holocaust is distorted and trivialized in modern American politics.

Maria, a work-study student at the Center, was tasked with assisting me in my work. I learned at our first meeting that Maria was a DACA (Deferred Action for Childhood Arrivals) student who had come to America from Mexico at the age of 7. She excelled academically at a Minneapolis public high school, and her success landed her a scholarship at Augsburg, where she majored in political science and international relations.

We told one another about our family stories of immigration to the United States. I spoke of my parents’ arrival to this country in 1952 after surviving the Holocaust and how they escaped from forced labor camps and went into hiding. I shared with her that both sets of my grandparents were murdered by the Nazis.

Maria shared her story with me. She was born in Columbia and moved to Mexico when she was very young. Her family sought refuge from the dangers and incessant violence of Columbia’s drug wars that were raging at the time. A family friend in Mexico helped her mother move to the United States, but Maria had to stay behind and lived with her mother’s friend. Her journey to the United States began in the middle of the night, when a van arrived to pick her up. She was told that the vehicle would take her to her mother in a land where the streets were paved with gold.

There were several others in the van including senior citizens and a pregnant woman. The passengers were complete strangers to Maria. She was the only small child in the group. When they arrived at the border, the van’s occupants were told to run as fast as they could. In the darkness, Maria gouged her leg on the barbed wire border fence, and fainted. Bleeding profusely, Maria kept moving and fainted again, and woke up in a Wal-Mart store, somewhere in Arizona, she now surmises. Two people in her group died during the crossing. At the store someone used a pay phone and a few hours later a young white couple in a car picked her up, and she was told that the duo would take her to her mother. Several weeks later, Maria was reunited with her mother on a cold winter day in Minneapolis in 2002.

A few months after our first meeting, Maria accompanied a group of Minnesota high school and college students on a day trip to the Holocaust Museum in Washington. The trip was organized by the Jewish Community Relations Council of Minnesota and the Dakotas. Upon her return, I asked Maria about her impressions of the museum and she simply responded, without hesitation, “At the museum I was the only one in our group who cried.”

I wanted to know what triggered her response. “I separated from the tour group, because I wanted to spend more time in a room with portraits of Jews who died in a particular town,” she explained. “I looked at the portraits for a long time and with tears coming down, I kept asking myself, ‘How did this happen?’ I just could not get that out of my mind, and I could relate to some parts of the story. My experience at the museum empowered me to tell my own story and encourage other dreamers to tell theirs as well.”

In the coming days, the President and Congress will determine the fate of Maria and 800,000 other dreamers. Just as an encounter with the Holocaust inspired Maria to strengthen her resolve to fight for her future, her story must also strengthen our resolve to fight for legislation that gives Maria, and all aspiring citizens a pathway to citizenship. As Maria and I have learned together, the Holocaust and genocide are uniquely evil acts that defy historical comparisons and trivialization. But they also hold universal lessons to inspire us to fight against hatred, bigotry and xenophobia. We in the Jewish community have crossed borders to flee oppression and economic hardship to build better lives for many generations. It is now incumbent on us to help Maria continue to build her promising future in the only home she knows.