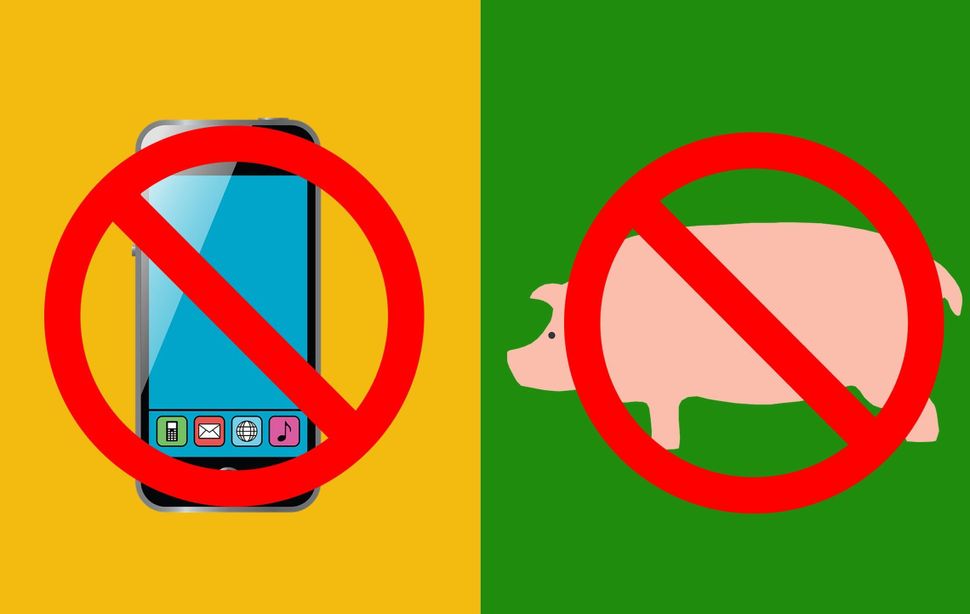 Just as God works in mysterious ways, so, it seems, do human beings grow in mysterious ways. Each Jewish person decides on a particular course, as well as to the degree in which they plan on committing and investing themselves in the observance of mitzvot, commandments. These are the decisions that each person must make for themselves, each one an expression of their unique souls and strivings.

While the variations that distinguish each spiritual journey are many, I have picked up on certain pattern that seems to repeat themselves over and over. It seems that most people (at least in my experience) accept upon themselves the full observance of Shabbat before they accept upon themselves the full observance of kashrut inside and outside of the home. Many people who have been fully Sabbath observant for decades and keep a fully kosher at home remain in some degree of “kosher compromise” outside of the home by eating at restaurants that are not kosher certified — and I am not aware of many individuals who practice the opposite.

My partner in Jewish outreach, Rabbi Nasanya Zakon, shared with me a question that he recently posed to a group of his students. “Would they be quicker to fully keep Shabbat or kosher?” Their unanimous answer — They would rather keep Shabbat.

What is it about keeping kosher fully that seems so daunting to so many? Is keeping kosher that much harder than keeping Shabbat? I concede that it is certainly difficult to give up the many delicious non-kosher foodstuffs one has grown to enjoy, and the loss of convenience in dining out at the seemingly endless non-kosher restaurants that dot the map is an equally difficult pill to swallow. Keeping kosher is more expensive and it does require more food planning as far as office-noshing and vacation-going goes.

But is this quantifiably more difficult than severing oneself from electronics, internet and automobiles for 25 hours every single week? And what of the myriad work complications that Shabbat observance brings with it? Consider the many jobs that require work on the weekends that must be immediately ruled out, or at a minimum might require special accommodations and the potential loss of hours and pay. The Jewish Sabbath observant individual is also bound to miss any family or friend get-togethers that are scheduled on Friday nights and Saturdays, as well as that Billy Joel concert that he’s waited years to attend, only to discover that it’s scheduled for a Saturday afternoon!

No, I don’t think that the difficulty of keeping kashrut is what lies at the heart of the matter (although I don’t deny that it plays a role). I rather believe that the difference lies in our appreciation and lack thereof for these two distinct mitzvot. For with all of the complications and “burdens” that Shabbat places upon its practitioner, the benefits of Shabbat observance are well known and appreciated. After all, who hasn’t experienced the sublime sense of calm, peace and tranquility that permeates the Sabbath-observant home? Without the distraction of electronics and cell phones, families and friends find themselves enjoying each other’s presence around the Shabbat table, engaging in meaningful discussions, singing beautiful melodies and enjoying delicious delicacies. Communities come together, as does the Jew with his Maker. And hey, who can argue with a day free from errands and a few extra hours of sleep? A case can certainly be made that the personal benefits of Shabbat observance outway the restrictions and complications that Shabbat presents.

Such is not the case as often times regards the perception of the personal benefits of keeping strictly kosher. For aside from the occasional case for increased self control, kosher is seen by most as the quintessential chok, a commandment whose reasoning we do not know, and whose practice is more a sign of religious commitment than anything else. And although religious commitment is seen by many as praiseworthy, it is personal interest that often times motivates change (As the Sages say, “One comes to do mitzvot for the right reason by initially engaging in them for the wrong reason [ie, for selfish reasons]”). In kosher’s case, and as regards the profit to the individual, the burdens are perceived as far outweighing the potential benefits.

It is for this reason that it is so important to educate ourselves of the true benefits of keeping kosher. The Torah teaches us that eating kosher foods accomplishes the vital role of preserving our inherent holiness, while consuming non-kosher foods spiritually pollutes our hearts, making it all the more difficult to connect to God and engage in the meaningful service of God. As the Torah records, “You shall distinguish between the clean animal and the unclean… and you shall not render your souls abominable through such animals and birds…which I have set apart from you to render unclean. You shall be holy for me, for I Hashem am holy…” (Vayikra 20:25-26). The holy Zohar (end of Parshat Mishpatim) goes so far as commenting that consuming non-kosher food causes the image of God that is placed within us all to depart! Who amongst us can hear such words and not be motivated to come closer to the mitzvah of kashrut? Can one argue still that the burdens outway the personal gain?

It should be noted that even one who strictly consumes dairy and vegan products in non-kosher restaurants will, in all likelihood, ingest non-kosher ingredients in the process — and with them, their unwanted spiritual side effects. The list of potential pitfalls are numerous: From the consumption of vegetables not properly cleaned of bugs, to the taam (the taste) of non-kosher meat, poultry, seafood and milk and meat mixtures that seep into vegetarian dishes cooked in the same pots and pans, to issues as ubiquitous as the kitchen and serving staff errantly describing certain meal items as vegetarian when in fact they are not. Add to this the numerous rabbinic prohibitions such as bishul akum (food cooked by non-Jews) and the usage of non-kosher wines in the production of sauces and glazes, and one realizes that consuming non-meat menu items in a non-kosher restaurant is a halachically and spiritually perilous gamble.

In an amazing halachic twist, the Chofetz Chaim (in Sefer Machaneh Yisroel), writing in the late 19th century to Jewish soldiers in the army, notes that if a soldier has the choice to either go to an army base in which he can keep Shabbat but cannot keep kosher or go to a different army base in which he could keep kosher but not Shabbat, he should choose the base that allows for the observance of kashrut and not Shabbat! His reasoning? Although the punishment for the desecration of Shabbat is more severe than the punishment for violating the laws of kashrut, and even as the Sabbath is one of the Ten Commandments, because these soldier have no choice but to obey their orders (under threat of death) they are held equally unaccountable for violating either of these mitzvot. That being said, the consumption of non-kosher foods still sullies the heart and soul of the Jew, making that the worst choice to violate!