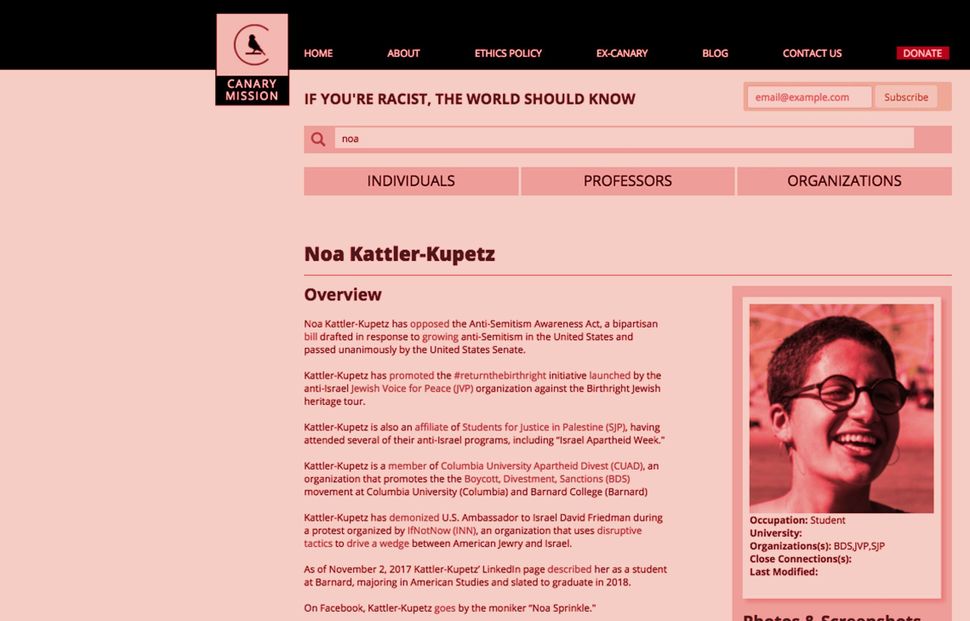 Noa Kattler-Kupetz was publicly blacklisted by the Canary Mission, a shadowy website. 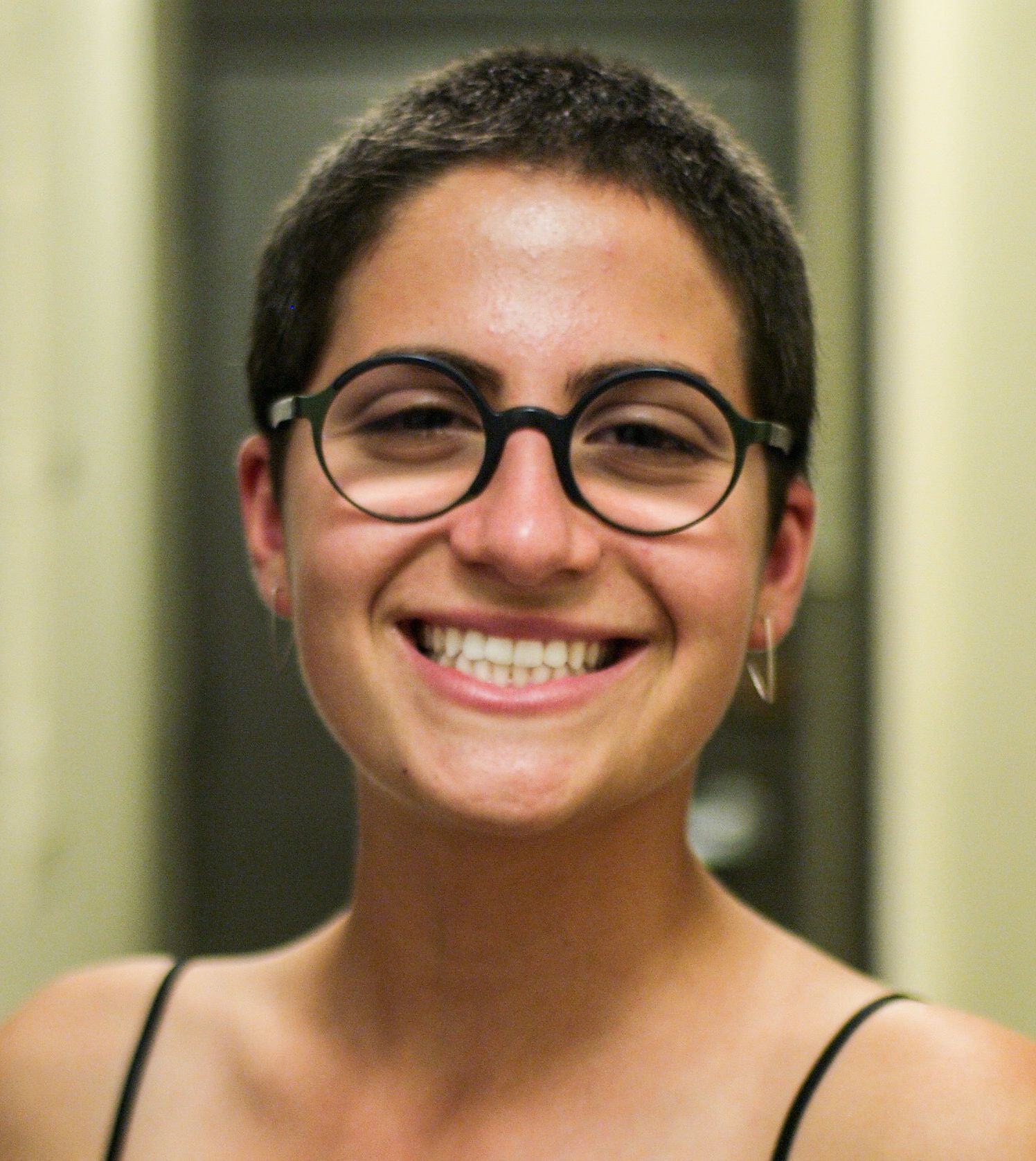 Earlier this week, I discovered I’d been added to Canary Mission’s database. Canary Mission is a McCarthy-esque blacklist, a website that collects and publishes information about activists who support Palestinian rights. The site claims to document “people and groups that promote hatred of the USA, Israel and Jews on North American college campuses,” with the header, “if you’re racist, the world should know.” When the site launched in 2015, it’s goal was even more explicit: “It is your duty to ensure that today’s radicals are not tomorrow’s employees.”

Apparently, I, a senior at Barnard College, am one of those dangerous radicals.

I’m a proud Jew. I’m committed to Jewish community, and get great joy out of hosting Shabbat dinners and attending an occasional Friday night service. Integral to my Jewishness is the activism I do with Jewish Voice for Peace (JVP), and my stance as anti-Zionist. I grew up in a conservative Jewish community that taught Zionism alongside Jewish values, history, and culture. As one can see on my Canary Mission profile, I attended AIPAC events in high school, went on the March of the Living as a senior at Milken Community Schools, and even joined TAMID once starting college (I remember sitting in my high school auditorium, watching alumnae present on TAMID. What a great way to continue being involved with something ‘sort of Jewish’ in college, I thought). At the time, my conception of Israel and Judaism were inextricably connected. I hadn’t been given space to imagine my Jewish identity separate from Zionism.

What shocks me about finding myself on Canary Mission is that I am far from being an outspoken activist or organizer on my campus. I am a Jew whose political beliefs differ from the community she grew up in. And because of this, I’ve ended up on a blacklist. Because I’m anti-Occupation and support Palestinian rights, stances that conflict with ideology taught and upheld by most American Jewish institutions, I am a threat. I’m not a young Jew with opinions of her own, but a young “radical,” brainwashed Jew. I am not the future of Judaism, but a challenge to the Zionist-norm, a threat to its longevity, who must be ostracized and whose views must be debunked.

I ended up on Canary Mission because a Facebook friend of mine took time to search through my online presence and send proof of my “racist activity” to Canary Mission. I probably met and shared a Jewish community with this anonymous whistleblower at Camp Ramah, my Jewish high school, or TAMID. We probably sat through the same StandWithUs training, and together received our formidable Jewish education that tiptoed around, if not completely erased, Palestine.

As I started to find my political voice and my Israel politics shifted, I made the choice to keep connections on Facebook with people whose beliefs differ from my own. I did this believing my newsfeed shouldn’t be an echo chamber. I wanted to see what articles right-wing high school acquaintances were posting: what causes mattered to people I hadn’t seen for years, what ideas people outside of my college bubble were interacting with. Ironically, it was my desire to stay connected to my Jewish community that led to this violation. I’m aware all information I put online can be made public, but I wasn’t prepared to be slandered. Finding myself listed on Canary Mission has stripped my autonomy to represent myself on the internet and control my narrative.

I know how powerful exposure can be when videos of police misconduct online have galvanized support for Black Lives Matter, posts have gone viral to give voice to survivors through #MeToo, and screenshots have held cyberbullies accountable. Yet when this tactic is used to misconstrue information and slander, it becomes horrifically dangerous.

I am shaken by how traumatic it feels to have had a Facebook “friend” take the time to go through my internet presence, screenshot photos, and share it to a right-wing fascist site. I am equally shaken by the lack of integrity Jewish organizations have shown by not speaking out against Canary Mission when young Jews like myself are targeted.

The information, communities, experiences and people I’ve encountered in the past four years have pushed me to think critically about my beliefs and how they intertwine with my values. Growing up in a strong Jewish community, I was taught to value social justice and inclusivity. I was also taught that the Palestinian identity was a fiction. College has been a space for me to do important and painful un-learning. I’ve come to realize my Judaism finds Zionism a hypocrisy.

I spent a summer in Israel on the TAMID Fellowship between my sophomore and junior year. I didn’t have an “aha!” moment in which my political stance drastically shifted. Instead, I spent two months in Tel Aviv feeling deeply isolated in a program in which I seemed to be the only person questioning the view of Israel we were being given. The program claimed to be apolitical, but I couldn’t shake the feeling of my presence in Israel being a political statement in itself. I felt put off by army culture, about being told this homeland was inherently mine, but primarily, by the curated invisibility of Palestine. I came home ready to take the courses and read the texts I’d been scared to delve into before. Canary Mission diminishes that journey into a slanderous page. I don’t want to promote the narrative of becoming “radicalized,” because I wasn’t. I just gave myself space and time to learn and grow. And now, I am another Jew who has been “outed” by her “brethren.” I feel angry, deceived, and hurt. I am horrified.

For those who believe in Jewish peoplehood- what does it mean to be a “community” if members stealthily out those with differing beliefs? Who labels someone like myself, who is excited by and involved with Jewish life, as an anti-Semite or self-hating Jew?

Though created by right-wing Zionists and discredited by most, projects like Canary Mission can feel very dangerous to the young people they target. They put us on a literal blacklist, making it tricky for some of us to get jobs or get through customs at Ben Gurion Airport, and creating countless dangers that come from having our information listed, now easily distributable and targetable.

Let the magnitude of this sink in. The vehemence of this message, felt by young Jews across the United States, extends far past Canary Mission’s reach. If you’re worried about why young people aren’t engaged in Jewish life, here’s a logical reason.

What Jewish world are you creating? Who are you leaving behind?

On January 7th, Israel passed a travel ban for leaders and members of 20 NGOs, JVP included. Gilad Erdan, Israel’s strategic affairs and public security minister, said that the groups banned from entering the country slander Israel with a “campaign of incitement and lies.” It must be acknowledged how similar the tactics enacted by the Israeli government are to this site created by right-wing Zionists. When comparing Canary Mission alongside this ban, the site seems inline with Israel’s political motive. Painting me as foolish and radical, and silencing dissenting voices, is instrumental to upholding the Zionist project.

Canary Mission is clearly an extreme, but the sentiment behind it isn’t. For many American Jews, the distinction between anti-Semitism and anti-Zionism remains unclear. I remember sitting through a StandWithUs seminar in high school, and being taught a script-like defensive response to give to anyone who mentioned pinkwashing or challenged Israel’s legitimacy. When it came to Israel/Palestine, we were not taught to be open-minded, or to treasure the Jewish value of asking questions. We were taught to Otherize and aggressively combat any position that swayed from the orthodoxy.

What is the young Jewish voice we’re cultivating? How can we teach young Jews to combat racism and fight for freedom for all, rather than use exploitative racist practices such as Canary Mission to perpetuate injustice?

Jewish educators and institutions need to redefine social justice and the floaty idea of “tikkun olam.” My Judaism values Palestinian rights and lives. My Judaism doesn’t include defaming and villainizing another whose political beliefs threaten one’s Zionist agenda. My Judaism also demands resilience, and no blacklist will stop me from asserting my values and identities.

To this day, no mainstream Jewish institution has called out Canary Mission. The site continues to amass a database, mirroring the Israeli government’s tactic of shunning and silencing those whose opinions challenge the Zionist project. We must do better, because if we don’t, another betrayed Jew like me may be quick to write off Judaism. I want to believe in a Jewish future that excludes Zionism as an expected and even applauded component of Jewish identity. I want to believe in a Jewish future in which voices like mine are valued and not disgraced.

Noa Kattler Kupetz is a senior at Barnard College, where she studies American Studies with a Concentration in Race and Ethnicity.