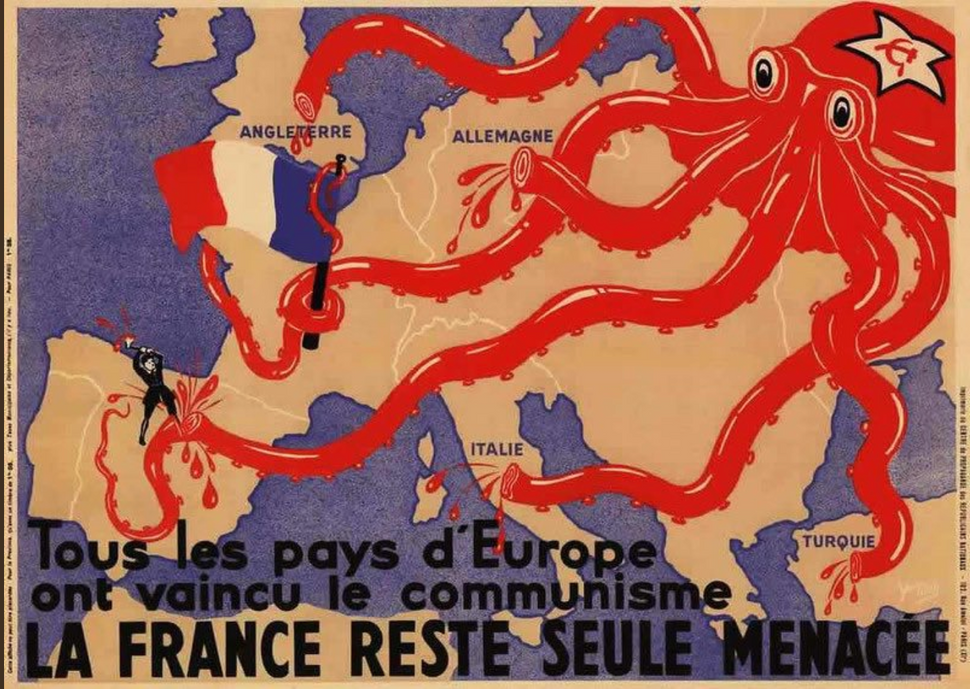 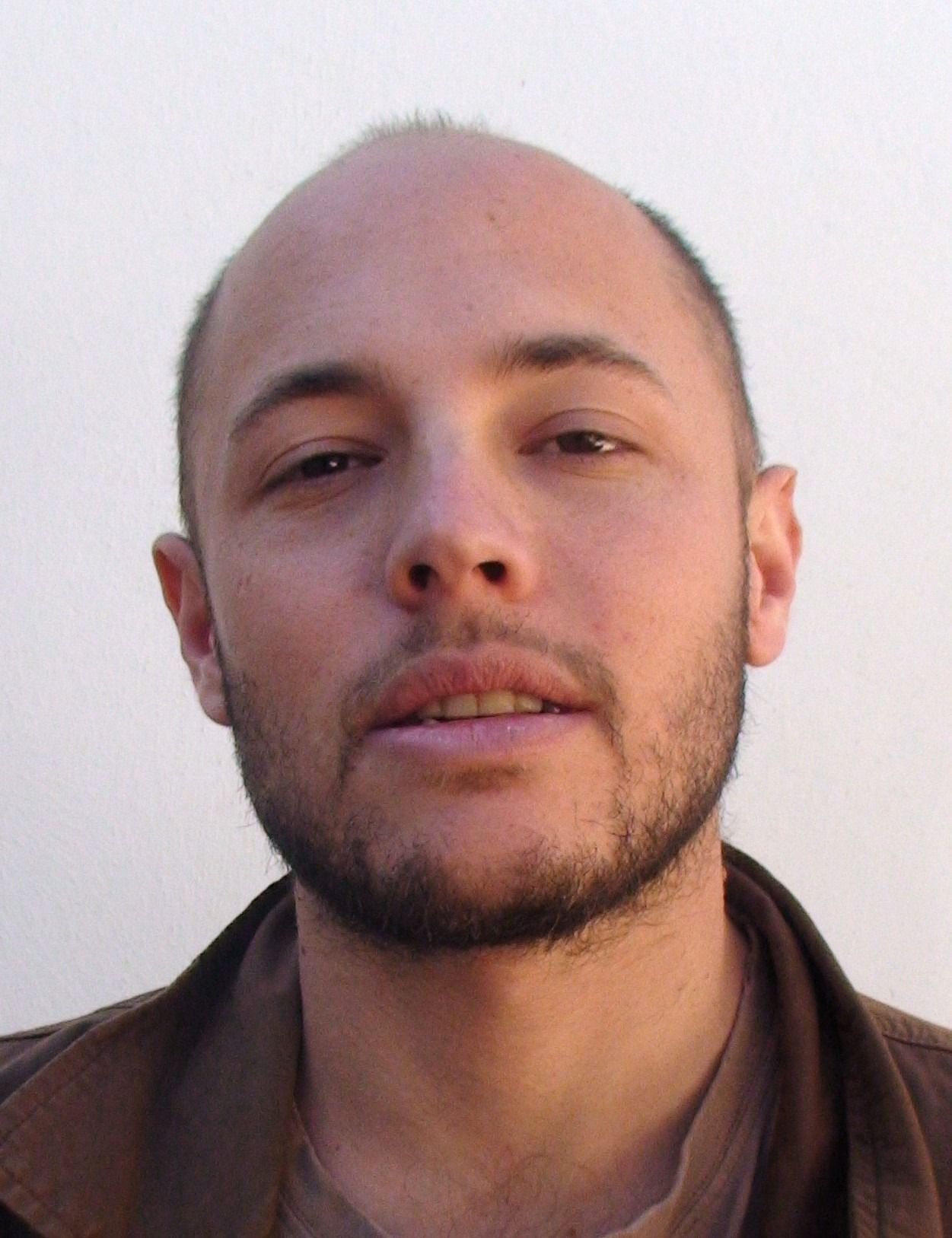 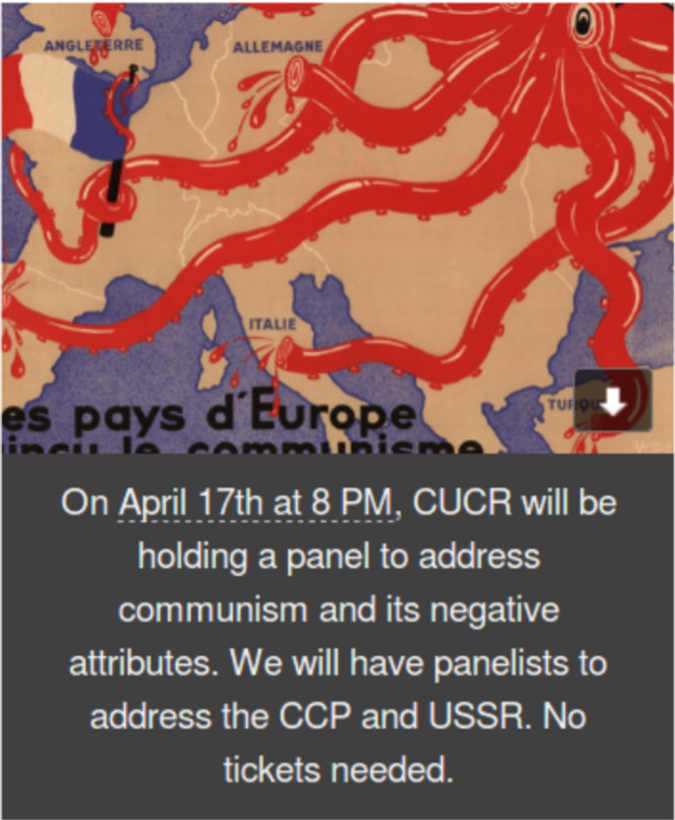 On March 18, in an email highlighting the group’s upcoming events, the Columbia University College Republicans announced a panel to address “communism and its negative attributes” — using well-known anti-semitic imagery. The image accompanying the announcement depicts a red octopus suspended over the USSR reaching its long tentacles out onto Europe. The severed arms are above countries which were fascist in 1937 (Germany and Italy) or backed fascism over “Bolshevism” (Turkey and England). It also depicts a fascist phalangist from Franco’s army cutting the tentacle over Spain. The text, in French, lamments France’s equivocation in crushing the communist menace and the country’s failure to sympathize with the likes of Mussolini and Hitler.

As a Jewish student, I was immediately shocked to see this known anti-Semitic image employed by a campus student group. Whatever one thinks about the Russian revolution and its reification into state communism, it is necessary to call out this kind of propaganda for what it is: an anti-Semitic trope linked to the canard “Jewish Bolshevism” with a long and genocidal history.

Many are aware that The Protocols of the Elders of Zion is the classic anti-Semitic text. But most do not know exactly what made it anti-Jewish, nor do they understand the lineage of hate it inaugurated by building on the idea of a Jewish conspiracy to control the world. This tradition now manifests directly in right-wing theories of Jewish globalists, behind the scenes “money grubbers”, manipulating the worldwide economy with their long, outstretched “tentacles.”

The Protocols, a forged document meant to implicate Jewish leaders in this worldwide conspiracy, was published just as the bloodiest of Russia’s 1903 anti-Jewish pogroms swept the Pale of Settlement. The document soon found its way to Europe and the United States.

In 1919, Carl Ackerman of the Philadelphia Public Ledger, who later went on to head Columbia’s journalism department, published the Red Bible, an English translation of the Protocols which omitted all references to Jewish authorship and recast the text as a Bolshevik Manifesto. This was the beginning of a long anti-Semitic association between Judaism and Bolshevism.

In the UK, the fascist group “The Britons” translated and published The Protocols and argued that the Jewish “Hidden Hand” was responsible for a secret infiltration of all British institutions. According to Gisela Lebzelter, their 1922 cartoon by their cartoonist “Goy” depicted “world Jewry, represented as an octopus reaching out for all continents with innumerable tentacles symbolizing Jewish interests in railway and shipping, white slave traffic, cotton industries, base metals, [etc]…” They claimed that Jews were not just alien parasites, but also behind a “Bolshevik communist” movement to Judaize the world. For The Britons, this manifested in British Bolshevism’s attempts to trick the working class to support their revolution.

In 1926, a Russian tsarist general named Arthur Cherep-Spiridovich, who had fled to the United States, published an anti-Semitic book known as The Secret World Government or The Hidden Hand. Under his “Anti-Bolshevism Publishing Association”, the book expanded on The Britons’ claims, asserting that bankers such as the Rothschilds were a “financial octopus strangling America.” Ed Rothschild V, according to Cherep-Spiridovich, was the real leader of Bolshevism. Internal consistency of their propaganda was trivial. The fact that, as communists, Lenin and his Bolshevik movement hated all bankers meant little to purveyors of this anti-Semitic conspiracy theory.

Winston Churchill, whose own anti-Semitism has long been buried beneath his mythical status as a war hero, published an article in 1920 in the Illustrated Sunday Herald which caricatures “Good” and “Bad” Jews. He wrote that the bad ones were “International Jews” who followed Karl Marx, Rosa Luxemburg and Emma Goldman, creating the Bolshevist conspiracy to spread Jewish control through communism. He, ironically, lauds Zionism as the only good alternative, thereby feeding decades of anti-Semitic support for the colonization of Palestine.

However, Churchill would later become a victim of his own conspiracy: Nazi propaganda, channeling The Protocols, depicted the British Prime Minister himself as a slimy octopus helping the Jews take over the world. The Nazis would go on to use the octopus in much of their anti-Semitic propaganda aimed at undermining the Allied war effort.

Today, this anti-Semitic conspiracy theory is back in the mainstream under the right-wing concept of “Globalism.” Trump himself has transmitted its ideas in conjunction with its prime ideologue Stephen Bannon. Critics of Globalism are not merely opponents of neoliberal free trade. Rather, it is an ideology that believes in a worldwide movement to undermine national sovereignty. And who are the people said to be behind of this movement? None other than a supposed cabal of wealthy Jews assisted ideologically by Jewish “cultural Marxists” like Adorno and Derrida. This is why the National Rifle Association depicted Michael Bloomberg as an evil octopus and Breitbart has peddled octopus imagery to describe George Soros. Even Facebook’s Mark Zuckerberg has been targeted.

At a time when anti-Semitism has reared its ugly head threatening to take us back to the 1930s, we should not stand for this kind of hatred on Columbia’s campus — not least from an official student group like the College Republicans. It is already a travesty that this group has repeatedly brought White Supremacists to speak on campus; the university must take action to protect all vulnerable college students lest they too become complicit.

Jared Sacks is a PhD candidate in the department of Middle Eastern, South Asian and African Studies. He is a member of Jewish Voices for Peace and Students for Justice in Palestine.