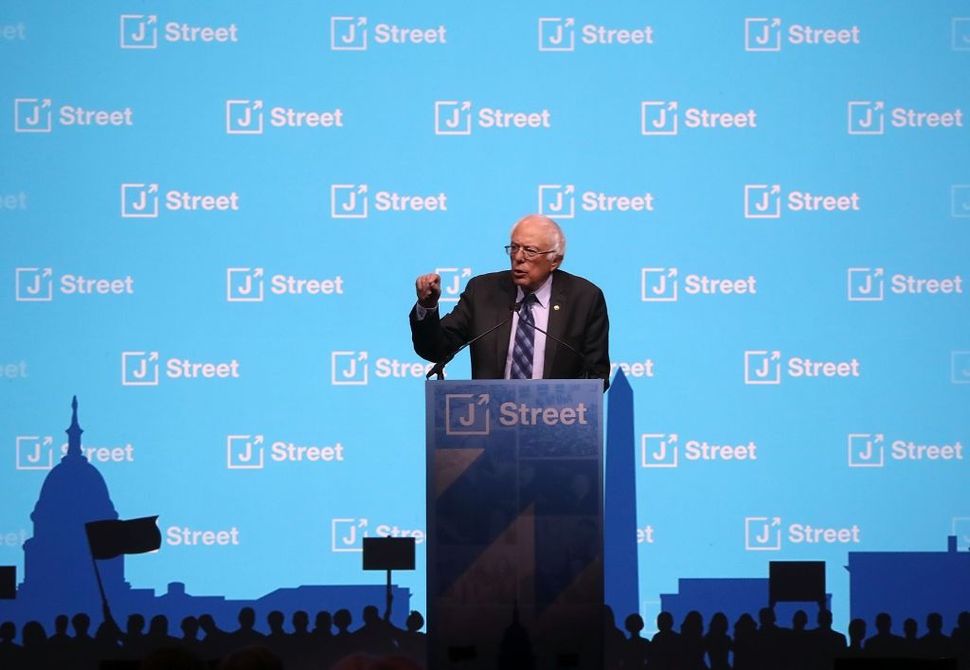 Sen. Bernie Sanders delivers a speech during J Streets 2017 National Conference at the Washington Convention Center, on February 27, 2017 in Washington, DC. This year’s theme is ‘Defending Our Values, Fighting For Our Future.’ Image by Getty Images 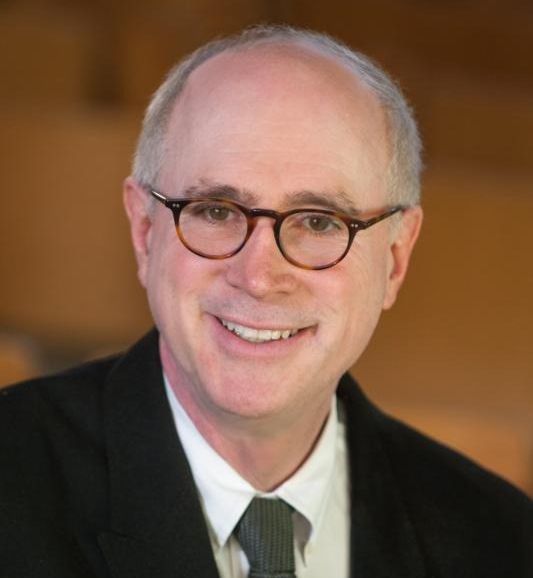 It saddens me that a member has twice maligned in this publication the congregation of which I am privileged to serve as rabbi. It pains me even more to lose two members, who have contributed so much over so many years to the vibrancy and energy that has been the hallmark of our synagogue since its inception. And while I would prefer to keep disagreements over such matters within the family, I feel compelled to publicly respond to what I believe has been an unfair and inaccurate portrayal of our synagogue and what it stands for in two recent columns written by Alan Elsner.

An organization has the right to determine the principles which are its agreed upon core values. Support for the State of Israel is one of the core values of our congregation. Another value we hold dear is to foster an inclusive, welcoming and respectful environment in which members can worship, study and support each other through the joys and sorrows of life. Far from being mutually exclusive, such values (among others) animate everything we do.

Elsner casts our leadership as intolerant and fearful of a simple leaflet promoting J Street’s national conference. He proclaims that our board’s denial of his request to promote J Street’s conference is un-Jewish and un-American. And, although he rails against a litmus test for being considered pro-Israel, he has imposed a litmus test of his own for being considered tolerant and open to free debate — the active promotion of J Street.

When one disagrees with J Street’s approach and policies because they feel that their public positions critical of Israel are not pro-Israel and do not serve Israel’s interests, J Street cites the mantra that debate is being shut down. It is a very demagogic approach. Quite simply — J Street can publicly criticize Israel, but it is not ok to criticize J Street.

I reject the notion that a synagogue cannot make a principled decision to decline to promote a specific organization when it deems the actions of that organization to be antithetical to one of its foundational principles. I refuse to accept the idea that declining to promote a J Street function is tantamount to stifling debate or that this means one is closed-minded and not open to the expression of different ways of supporting the State of Israel.

Contrary to the impression given by the articles, our community encourages and welcomes debate and discussion on matters pertaining to Israel and other topics important to the Jewish community. Elsner has been invited to speak at the synagogue, and has in fact spoken on behalf of J Street at our synagogue on more than one occasion, and was also given an opportunity to make his case to the board.

That we encourage debate and discussion of diverse views is evident in many ways. Although I publicly opposed the Iran nuclear deal, I also disseminated to our membership President Obama’s letter defending the deal. At our annual Yom Kippur afternoon open forum, the discussion topic last year was the agreement with Iran, and supporters and detractors of the deal had no difficulty engaging in a robust, respectful and informed debate. This year people debated and discussed their feelings about the Kotel. These robust discussions are anything but the “unity of views” Elsner accuses us of. It is simply not the case that differing and opposing views are not tolerated.

We have sponsored debates, including one last fall between Forward columnist JJ Goldberg and conservative columnist Jonathan Tobin. Our diverse programming over the years demonstrates that a wide range of views are presented, considered and debated. Our members hold, express and freely share their opinions on everything from politics to the kugel at the Kiddush, and they are welcomed to do so.

Elsner resorts to the familiar straw man argument that J Street’s detractors demand blind support of Israel’s government’s policies. I am not aware of a single critic of J Street who holds such a view. Framing the issue in this manner obscures the real basis for our concerns with J Street, which is the substance of their positions, as well as the time, place and manner in which they express those opinions. J Street professes to care about preserving Israel as both a Jewish state and a democratic one, yet they actively oppose and seek to thwart the policies that are the very product of that democracy. One need not agree with or support every policy to recognize that actively and publicly opposing and thwarting its policies lend legitimacy and abets those detractors who do not seek Israel’s well-being.

Neither I nor anyone at our synagogue has ever questioned the sincerity of Elsner’s passion and love for the State of Israel. The issue is not that Mr. Elsner was prohibited, discouraged or suffered recrimination from expressing his support of J Street, because he was not. Rather, the issue is that Elsner did not convince enough board members that J Street advances views and policies and conducts itself in a manner that is consistent with our mission statement on the State of Israel. The right to express differing views — which I and our board have steadfastly defended and will continue to defend — does not imply the right to a desired outcome. Elsner has unfortunately conflated the two concepts. And in doing so, he has unfairly maligned the character and integrity of our synagogue and its board.

While we recognize that others such as Elsner disagree, the board’s decision not to promote the J Street conference is not without basis. J Street pays lip service to notions of civility and open discourse, yet it promotes itself as the “Political Home for Pro-Israel, Pro-Peace Americans.” The implication is clear: “if you are in favor of peace, your home is J Street. If you do not want peace, by all means stay with AIPAC.” So much for tolerance and respect for opposing views. A more disingenuous and shameful attack on such a large swath of the American Jewish community is hard to fathom.

Consistent with our policy of encouraging frank discussion, I have specifically addressed our concerns about J Street directly with Elsner in a letter to him in which I outlined some of the ways in which the loftily stated ideals of J Street are contradicted by their actions:

“I have a deep love for Israel. My concern for its survival and well-being are among the reasons I decided to become a rabbi. I do not doubt that you are motivated by many of the same factors. Our difference however, as to our assessment of the intentions of its enemies, who just happen to also be its neighbors is radically different. While you may feel that what you call blind support for Israel is not in Israel’s best interests, I do not believe that lobbying the United States government to oppose positions of the democratically elected government of Israel is constructive or in Israel’s best interests.

I do not believe that supporting actions that bring in the United Nations, with its history of one-sided resolutions and actions against Israel can be deemed pro-Israel. I do not think that endorsing the Goldstone Report can be considered pro-Israel. Supporting policies which embolden Palestinian recalcitrance is not helpful. I cannot condone or publicize the activities of an organization which consistently expresses condemnation of Israel, and which does not speak out as forcefully against Palestinian incitement, and which rarely holds the Palestinians accountable for their actions. All of this, in my opinion, undermines the security and well-being of the Jewish state and ironically makes it that much more difficult for it to make compromises.

Our refusal to promote J Street has nothing to do with stifling free speech. The Board chose not to promote the activities of an organization which, despite its moniker weakens Israel’s position and seeks to diminish the cooperation and support it receives from the United States. For an organization to be pro-Israel it requires it to do more than just have a tag-line that says it is, which is why we choose not to put out information about its conference.”

Alan Elsner and his wife Shula will be sorely missed, as their active involvement has enriched our community in many ways. We will do as he asks and respect his opinions and the sincerity in which he holds them. We simply ask the same in return.