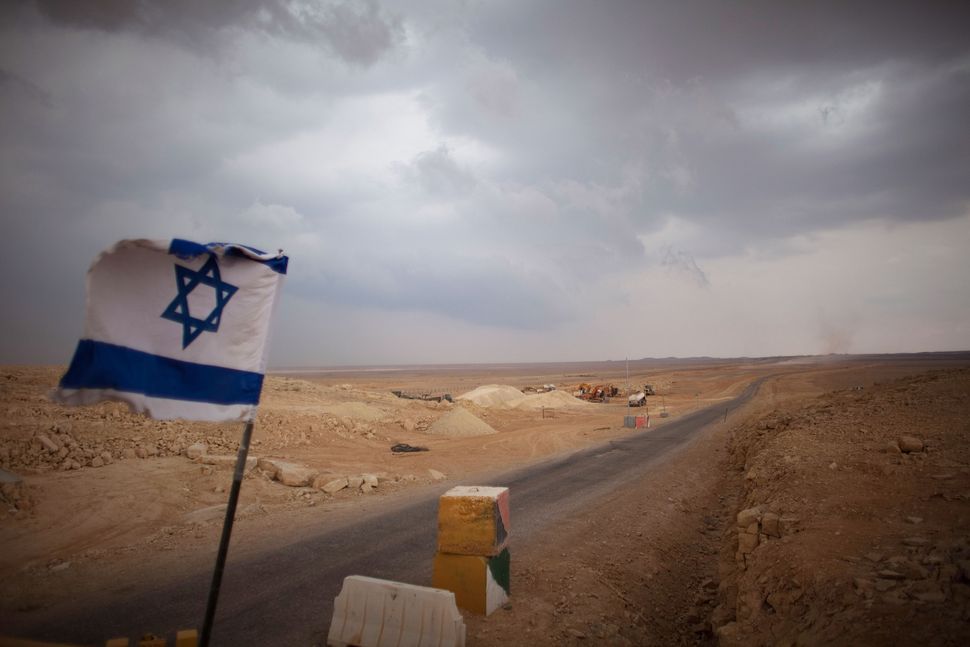 An Israeli flag flies at a checkpoint at the Israeli Egyptian border on February 10, 2011 in Israel. Tensions continues to intensify during the ongoing anti-government protests in neighboring Egypt. Image by Getty Images

Last week, we were arrested for participating in a sit-in outside the Israeli Consulate. Two days later, we hosted an anti-occupation seder at Harvard Hillel. The same week, young Jews in New York shut down Senator Schumer’s office, Jews in the Twin Cities closed the local offices of the Jewish Community Relations Council, and across the country Jews are rallying in dozens of other cities. This is what our generation’s Judaism looks like.

We were outraged and saddened by the killing of nine Palestinian civilians last Friday. These people did not pose a threat to the Israeli snipers who shot at them. They were mothers, fathers, children — all of whom were marching in a call for freedom and dignity for their communities.

The killings of thirty-one civilians thus far — with the death toll rising each week — represent a clear challenge to our values as Jews. But we are limited in our ability to hold any conversations about the Occupation, or about any of the violence that results from Israeli policy. The stifling of discussion on hard truths runs counter to Jewish values and to our tradition of open dialogue. The truths we must confront — that Israel has gone down a dark and violent path; that it is, in many ways, making a mockery of the humanitarian aims on which it was ostensibly founded; that criticism of Israel can be warranted and must be heard — are hard to hear. But as we remember Dr. Martin Luther King, Jr. this week, we reaffirm from his example that only by examining difficult, once-buried truths can we enact meaningful change.

We faced arrest at the Israeli Consulate in an effort to have an open, transparent conversation with those who uphold the occupation: all that we asked was that they condemn the violence against protesters. The Consulate, for its part, has made no attempt at engaging in open dialogue with us, other than condemning us for “cross[ing] the line into lawlessness.” And American Jewish institutions also fail us when it comes to discussions about the occupation in Israel/Palestine: while staff and students in the Harvard Hillel community have worked hard to make honest, thoughtful dialogue possible, Hillel International greatly limits the work we can do in their spaces with our Palestinian peers, who are often accused of “delegitimizing” Israel whenever they criticize Israeli policies.

Many of our Palestinian friends who were initially looking forward to joining our Seder felt unable to attend when they found out that the event would be hosted at Hillel: recalling Hillel International’s policy on Israel activities, they felt that they would not be welcome. In fact, when they sent us poems by prominent Palestinians to be read in the Seder, we were advised by Hillel staff that reading them could be construed to violate Hillel International’s standards of partnership simply because they used the term “apartheid.”

There is a place for legal restrictions on language: hate speech is dangerous and cannot be tolerated. But our efforts to critically discuss the Occupation and the Israeli-Palestinian conflict are not hate speech; we are confronting the occupation precisely because of our love and commitment to the Jewish community, because of our dedication to the tradition of tikkun olam. Without open dialogue and association, we cannot live up to the values our Jewish community has taught us.

We took action peacefully at the Israeli Consulate because we are committed to opening up candid, critical dialogue about the occupation. We were arrested for our efforts to speak out, but we will not let our arrest silence us. We will continue engaging in dialogue within the Jewish establishment’s framework (in this case, Hillel International’s) of what we can say, but we will do so with integrity: we will not shrink away from pointing out the oppressive policies that prevent us from talking about the Occupation. We did just this at our Seder last week, when we openly shared that we were advised not to present Palestinian poems, or risked being disaffiliated for violating Hillel standards of partnership. We constantly choose between working within our communities restrictive standards just to remain a part of a campus Jewish community, and working with our Palestinian friends. Right now, we choose this self-censorship, and it tears us apart.

As young Jews, we are taught that Judaism is a religion of righteousness, of struggle, of asking difficult questions; that God’s most precious gift is peace; that Diaspora Jews must have responsibility for the State of Israel. Yet we are also told that our ownership stake in Eretz Yisrael is a one-way street; that our power is window dressing; that we are to witness barbarity from the Israeli government and be silent; that if we cannot support every policy of the Israeli right-wing, we must shut up or be labeled self-hating.

This relationship can no longer continue in such an untenable form. The American Jewish establishment should expect to hear much more from young Jews about a future for Israel / Palestine that embraces morality, debate and dignity for all. When you cut off conversation for decades, you can’t be surprised when it comes crashing through the gates of your established institutions like a tidal wave. It’s time Hillel International, the URJ, the Federations, and other Jewish institutions look out the window and see the future of Judaism. We’re downstairs, in the lobby or at the front door, ready to talk. And we’re not moving until we have this conversation.

Helene Lovett is a student at Harvard College, and is active in IfNotNow and Harvard Hillel’s Progressive Jewish Alliance.

Noah Wagner is a student at Harvard College, a leader in Harvard Hillel’s Progressive Jewish Alliance, and a member of IfNotNow.