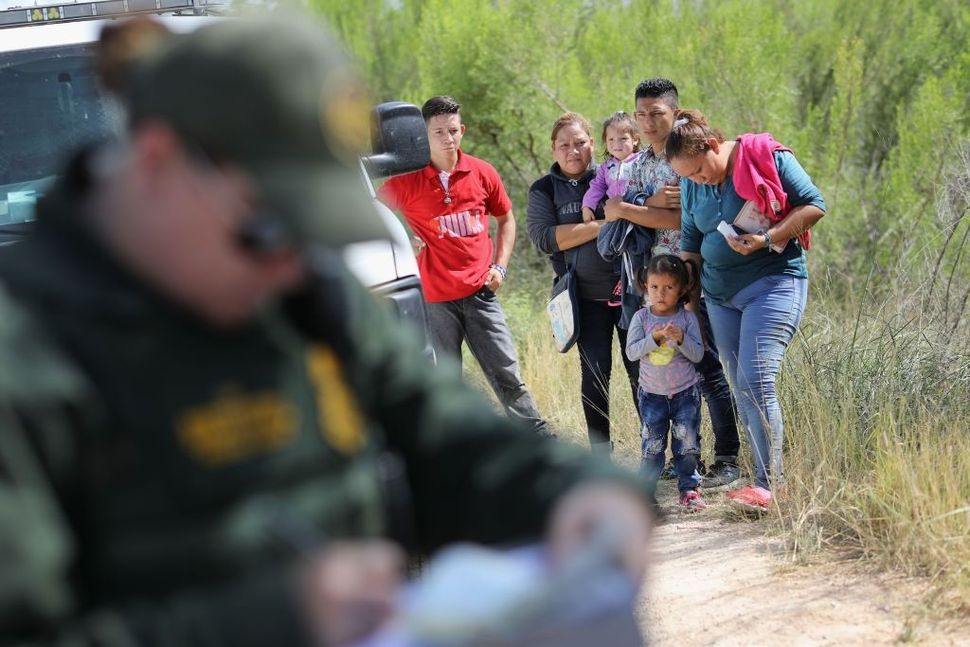 Central American asylum seekers wait as U.S. Border Patrol agents take groups of them into custody on June 12, 2018 near McAllen, Texas. The families were then sent to a U.S. Customs and Border Protection (CBP) processing center for possible separation. Image by Getty Images 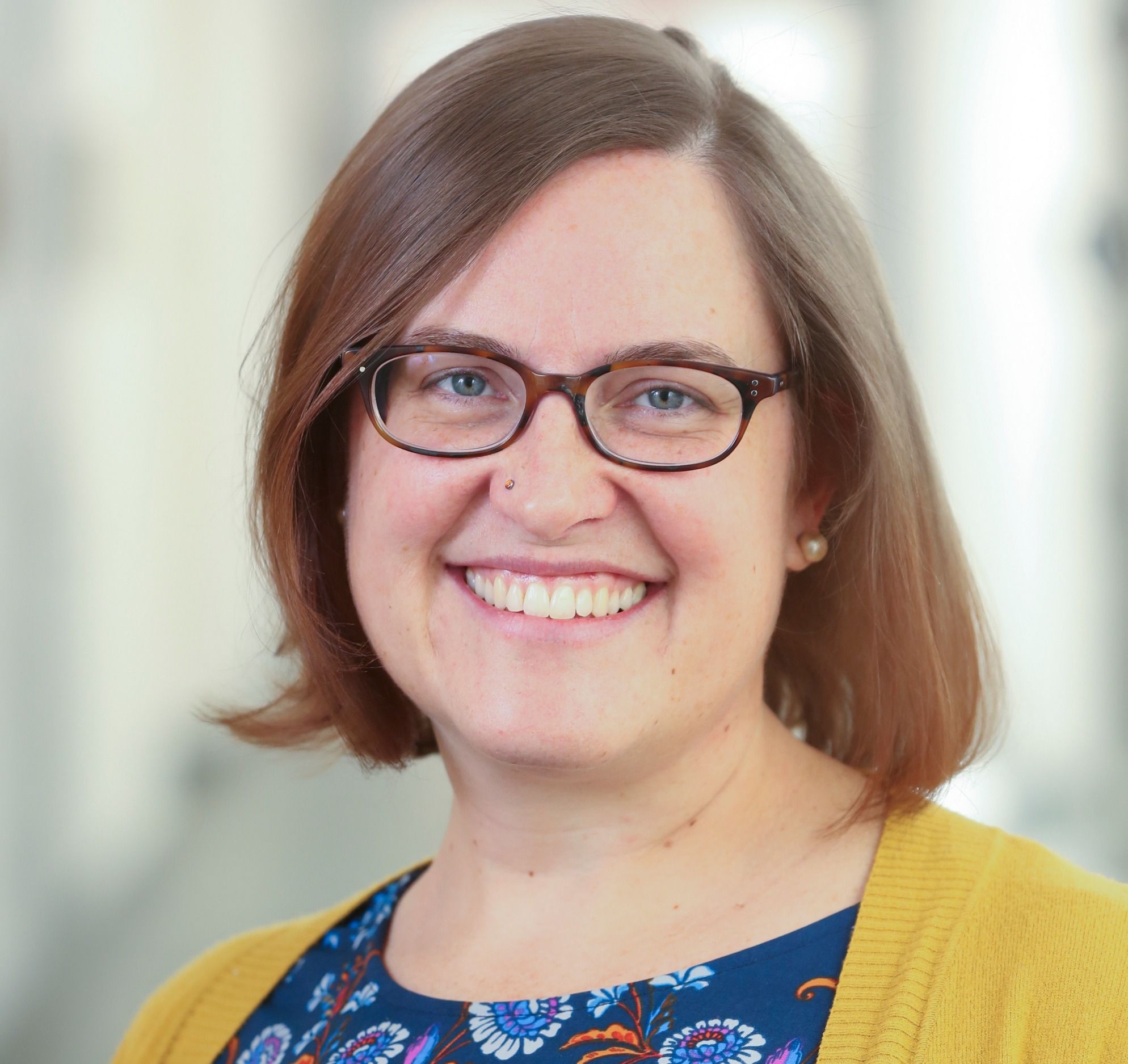 A humanitarian nightmare is happening right now in our backyards — and the Jewish community needs to step up to help.

The Trump Administration announced in May that it would implement a “zero-tolerance” policy at the border, meaning that it will criminally prosecute anyone attempting to enter illegally.

Since children can’t be jailed, this means minors who arrive at the Mexico border with their parents or other guardians are being separated from them and placed in detention centers or foster care. Far from seeking to avoid this traumatizing and completely unnecessary breaking apart of families, the Trump Administration has staunchly defended the policy, claiming a purported deterrent effect.

Just as many conservatives blame poor people for their poverty, Attorney General Jeff Sessions blames immigrants and asylum seekers, many fleeing extreme violence, for their plight. Responding to questions about the policy, he blithely said, “If you are smuggling a child, then we will prosecute you and that child will be separated from you as required by law. If you don’t like that, then don’t smuggle children over our border.”

“Zero tolerance” at the border is just the latest in a string of inhumane, anti-immigrant policies implemented under the Trump administration. Simply put, immigrants are under siege in this country. Which is why T’ruah: The Rabbinic Call for Human Rights, where I work as Director of Organizing, is mobilizing the Jewish community to help them. And why we want your congregation to join us.

In the year after Trump’s inauguration, arrests by federal immigration officials increased by a staggering 42 percent. Immigration and Customs Enforcement (ICE) has achieved this troubling statistic by raiding workplaces, picking up people outside schools and homes, and detaining them in courtrooms.

And this is to say nothing of many other of this administration’s xenophobic actions, such as the announced repeal of DACA (Deferred Action for Childhood Arrivals) last year, the end of protections for some TPS (Temporary Protected Status) recipients, and, most recently, the decision to stop granting asylum to victims of domestic violence.

The good news amid this avalanche of horrors is that there are things we American Jews can do to help. While it’s easy to feel overwhelmed and discouraged in this age of Trump, unlike the immigrants arriving at our borders who are being forced into detention centers and often must struggle to advocate for themselves in a new, unfamiliar environment, we have a great deal of power. We need to use it.

Last year, T’ruah launched a program called Mikdash that helps synagogues support immigrants and, in some cases, provide sanctuary to them. Over the past eight months, I’ve talked to dozens of synagogues and other Jewish institutions that are doing this work, which is clearly resonating with a lot of Jews. Currently, around 70 Jewish institutions, all around the country, have declared themselves to be “sanctuary spaces” — meaning they are committed to devote time and resources to supporting and protecting immigrants who have been targeted for deportation — including B’nai Jeshurun in New York City, Temple Beth Zion in Boston, Sherith Israel in San Francisco and Shir Tikva in Minneapolis.

In cities across the country, Jews are signing up for volunteer shifts at churches that host families in sanctuary. Jewish communities are also accompanying immigrants to their ICE check-ins, attending vigils, raising money, holding trainings, meeting with elected officials and participating in civil disobedience. In January, more than 80 Jewish leaders were arrested in the Russell Senate building in Washington, D.C., in a sit-in in support of Dreamers. In March, I, together with 20 other Jewish and Muslim leaders, was arrested outside the office of Speaker of the House Paul Ryan on the day DACA was due to expire.

T’ruah and the congregations in our Mikdash network are currently working with immigrant activists to determine the most effective actions we can take to stop the “zero tolerance” policy that is separating families at the border and to help the asylum seekers being harmed by it.

The rallying cry for the Jewish community has been “Let my people stay.” ICE is targeting people who have established lives here. Our friends and neighbors. Our tradition reminds us over and over again not to oppress the stranger. But the people who are being targeted right now are not strangers. They are us.

If your congregation is interested in becoming a sanctuary synagogue, T’ruah can help. We have information and resources available, and our staff can help connect you to sanctuary activists in your community.

Jewish history demands that we stand with those targeted for dispossession. We well know the tragedy of being forced from home and country because of being considered “other” (especially when we did not consider ourselves to be so). The Jewish community today would look very different if our neighbors had stood in solidarity with us in times of persecution. I am proud that so many communities led by T’ruah’s network of 2,000 rabbis and cantors are standing in solidarity today with our neighbors. Join us.

Rabbi Salem Pearce is Director of Organizing at T’ruah: The Rabbinic Call for Human Rights, where she works on issues of immigration and racial justice.