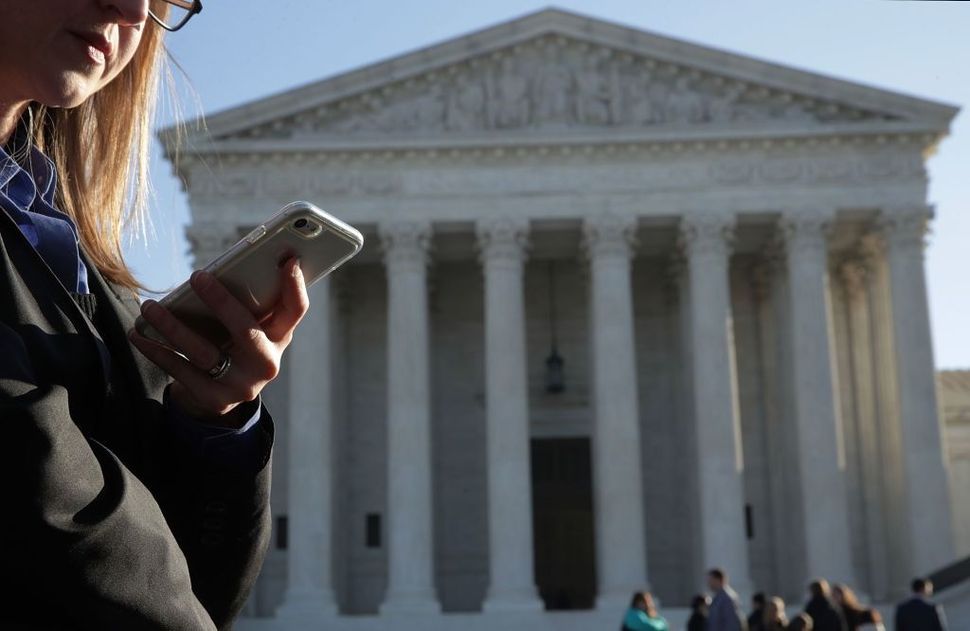 A woman checks her cell phone as she waits in line to enter the U.S. Supreme Court to view a hearing on November 29, 2017 in Washington, D.C. (Photo by Alex Wong/Getty Images) Image by Getty Images

Of the rulings that the Supreme Court handed down in its end-of-the-term rush, Carpenter v. United States (June 22, 2018) will prove to have the most far-reaching impact. The justices, by a 5-4 vote, held that the Constitution requires police to obtain a search warrant before gaining access to personal data that carriers collect from our cell phones. Police had used the information to place Carpenter at the scene of multiple robberies and to convict him of the crimes.

The media hailed the outcome as a major victory for privacy against Orwellian intrusion, but reports obscured an equally momentous implication. A few weeks after the 90th anniversary of Justice Louis D. Brandeis’ most prophetic dissent in Olmstead v. United States (1928), a case permitting wiretapping without a warrant, the Court has come around to his way of thinking. The Court began the process haltingly over 50 years ago, but only now have the justices embraced Justice Brandeis’ wisdom in applying the constitutional protection against unreasonable searches and seizures.

The Fourth Amendment guarantees, “The right of the people to be secure in their persons, houses, papers and effects against unreasonable searches and seizures shall not be violated and no warrant shall issue but upon probable cause.” Federal agents enforcing Prohibition tapped Olmstead’s phone by installing listening devices on wires just outside his residence without permission. Chief Justice and former President William Howard Taft held the government had not violated the Fourth Amendment. He read the provision literally: The tap did not occur on Olmstead’s person or in his house, and the agents did not seize papers or physical effects.

Justice Brandeis rejected this narrow-minded approach. He espoused what we call today the living Constitution: “Clauses guaranteeing to the individual protection against specific abuses of power must have a… capacity of adaptation to a changing world.” Otherwise, the Bill of Rights would become meaningless.

In that light, he focused on the type of information involved. He held that the Fourth Amendment “conferred, as against the Government, the right to be let alone — the most comprehensive of rights and the right most valued by civilized men. To protect that right, every unjustifiable intrusion by the Government upon the privacy of the individual, whatever the means employed, must be deemed a violation.” Tapping phones, regardless of the location of the listening device, amounts to a search. Recording conversations, even without physically taking a document, constitutes a seizure. Without judicial supervision, these activities violate the Constitution.

The Supreme Court formally overruled Olmstead in Katz v. United States (1967). Katz, who gambled, placed his bets over the phone from public phone booths. The FBI attached microphones to the outside of one of them and recorded his calls. The Court reversed his conviction, but took only a baby step toward adopting a right to be let alone. Justice Potter Stewart agreed that the Fourth Amendment “protects people, not places.” The fact that Katz used booths instead of his own phone did not justify the wiretap. Nor did it matter that the police attached the microphone to the exterior. It mattered that Katz intended to keep his calls private.

Justice Stewart added a qualifier. The Fourth Amendment applied because the Court considered Katz’s claim of privacy “justified.” This led to the convoluted “third party doctrine”: A person cannot keep secret information he hands over to a third party, and the police may seize it without a warrant. This makes sense with regard to lawyer-client privilege, for example. However, when it comes to modern communications, the doctrine ignores reality.

In Smith v. Maryland (1979), the Court held that police did not need a warrant to obtain from the telephone company a record of calls a subscriber generated when dialing, which the company kept in a pen register. The Court held that the caller gave the information to the carrier, a third party. But few realize they give anyone phone numbers when using the instrument. Moreover, a record of people with whom one communicates constitutes a form of spying. It represents the type of intrusion Justice Brandeis held within the protection of the Fourth Amendment.

The majority in Carpenter followed the Brandeisian approach. Under Smith, the government would have prevailed. The carrier held the information. However, the type of information — locational signals cell towers create whenever a person turns on a device — dictated the opposite result. Chief Justice John Roberts’ majority opinion tread cautiously. Without a warrant, he ruled, the police could not follow a person’s whereabouts for weeks. However, the case foreshadows correct outcomes going forward.