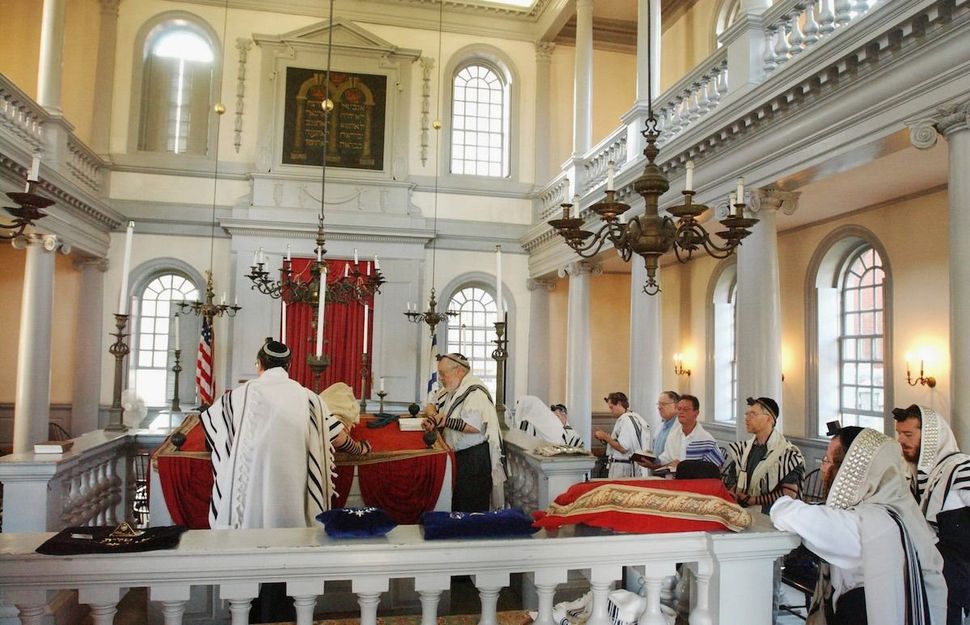 On June 7, the United States Court of Appeals for the First Circuit in Boston denied rehearing of a decision from a three-judge panel awarding Congregation Shearith Israel of Manhattan ownership of the crowns adorning the Torah scrolls in the ark of the Touro Synagogue in Newport, Rhode Island. The lawyer for the losing side, Touro Synagogue, indicated that he will take the case to the U.S. Supreme Court. The lawyer for the winner urged an end to the litigation.

Even if Touro Synagogue carries out its threat, Shearith Israel will get its wish. The Court should turn down the case.

The congregations, both older than the United States and with illustrious histories, fought over a proposed sale of Touro’s Torah crowns to the Boston Museum of Fine Arts. Touro needed the money, it argued. Shearith Israel countered that the sale violated Sephardic interpretation of Halacha and secular interpretation of agreements between the two institutions. The first issue will fail because courts stay out of these matters; a court does not sit as a beit din (a rabbinical court). The second issue may interest Rhode Islanders, but has no wider impact. The Supreme Court passes on consideration of narrow questions.

Last August, retired U.S. Supreme Court Justice David Souter, writing for a three-judge panel in Congregation Jeshuat Israel v. Shearith Israel, threw out the Halacha-based claim. He criticized the district court for delving into whether Touro Synagogue, with a substantial Ashkenazi membership, could depart from its Sephardic roots in interpreting the prohibition against selling Torah scrolls, except to secure the release of prisoners (Yoreh Deah 270:1).

Justice Souter wrote, “In implementing the religion clauses of the First Amendment, the Supreme Court has established a regime of limits on judicial involvement in adjudicating disputes between religious entities situated like the parties before us, when competing property claims reflect doctrinal cleavages. What the Court has approved as merely ‘marginal judicial involvement’ by the civil courts in such circumstances is aimed at avoiding… the degree of religious autonomy… and placing government in the position of seeming to endorse the religious positions of the winners, [in violation of the First Amendment].”

The question regarding which ritual a mixed Ashkenazi-Sephardic congregation must follow requires a court to interpret Halacha and minhag (custom). That job belongs to the rabbis. What’s more, the First Amendment’s prohibition against the courts (or administrative agencies) exercising jurisdiction over religious doctrine applies even if the adjudicators appoint an outside expert. While it would appear that such cases would not create excessive entanglement in religion, the litigation which declared the New York and New Jersey consumer kosher laws unconstitutional shows otherwise.

Both states sought to protect against merchants fraudulently claiming their food kosher. New York and New Jersey defined kosher as food meeting the standards of Orthodox Judaism — something ostensibly readily ascertainable. Both states hired boards of experts and qualified inspectors to carry out the laws. Yet, these efforts ran aground.

For one thing, as the New Jersey Supreme Court found, “[D]ifferences of opinion do exist with respect to the laws of kashrut and that disputes do arise. Because of varying doctrinal interpretations, varying degrees of trust that members of some sects place in the food supervisors of other sects, and varying ‘shades of observance’ undertaken by individual Jews, no one practice can be called ‘the only true Judaism’… Disputes may occur infrequently, but when they do, they are ineluctably religious in tenor and content.”

Pawning the job off to an expert to decide still entangles the government in religion, for the state then puts its weight behind a religious decision. This amounts to establishment of religion by delegation. Instead, in the case of Commack Self-Service Kosher Meats, Inc. v. Weiss, the Second Circuit held that the government can compel merchants to disclose the basis of their claims. Consumers, not the government, exercise judgment.

The Court of Appeals’ solution worked in that instance. More fundamentally, however, the government should not get into the question of whether Orthodox, Conservative, Reform or Reconstructionist practices should prevail for Americans, in their worship or private lives. In these matters, though not in general, “let the buyer beware.”