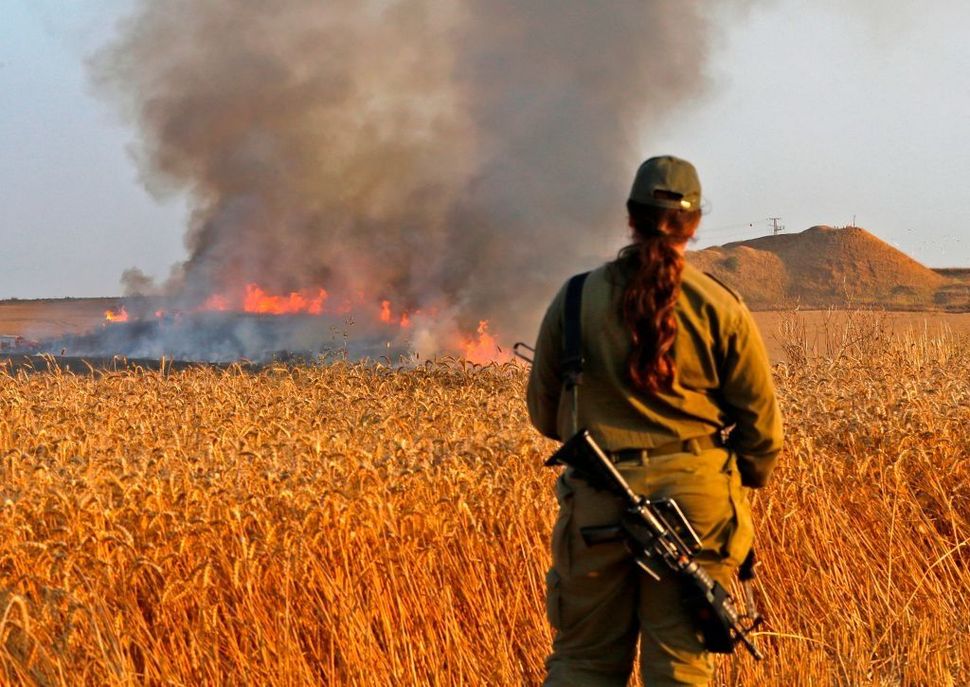 An Israeli soldier looks at a burning wheat field near the Kibbutz of Nahal Oz along the border with the Gaza Strip on May 15, 2018. (Photo by JACK GUEZ/AFP/Getty Images) Image by Getty Images

It had been 50 years since I last traveled to Israel. Much has changed in the start-up nation, including real toilets, delicious and plentiful food, new archaeological excavations and high-tech innovation. There have also been changes for Israeli women — though not all for the better.

I recently joined a group of 60 Jewish women leaders from the Jewish Women’s Funding Network (JWFN) and the National Council of Jewish Women on a study tour examining the status of women in Israel. We met with inspired leaders and organizations that are undertaking important work to improve the lives of women in the country, Jewish and Arab. Unlike the legendary trope that because Israeli women serve in the army equality is a given, we learned about a different reality.

Many Israeli women activists spoke of the “creeping normalization” of gender segregation, even in communities that aren’t ultra-Orthodox — and the Israeli government and public institutions are willing accomplices.

Ultra-orthodox Israeli men are being encouraged to participate in the labor force as a way to alleviate poverty, but gender segregation often comes as a result of these efforts. According to Eleanor Davidov, the director of the Israel Women’s Network’s women’s exclusion project, “Sex segregation isn’t even accepted by all parts of the Haredi community, yet it is becoming accepted in government offices, city halls, the army and even the private sector, and their efforts to be considerate of the ultra-Orthodox minority have come at women’s expense.”

There is an increase in gender segregation on university campuses as well. In November 2017, an amendment to the Council for Higher Education Law was proposed to normalize gender segregation in academic institutions to encourage access for ultra-Orthodox men. This amendment, which is still pending, would provide funding explicitly for this purpose. Several Israeli organizations fighting gender segregation jointly wrote a letter urging the Members of the Ministerial Committee for Legislative Affairs to oppose this amendment. They explain that permitting some students “not to hear women is by definition an institution that discriminates against women.” They also describe future damage that may be done to women, such as gender-segregated academic conferences, which would create roadblocks for women researchers who already have a difficult path. There is a strong possibility that if normalized gender segregation takes hold in academia, it could lead to gender segregation in the workplace, resulting in a discriminatory job market where opportunities for women become much more limited.

Exclusion of women and gender segregation in the Israel Defense Force is also increasing. Military service for most Jewish Israelis is mandatory, and men and women have historically served together. However, in order to encourage Haredi enlistment, special “women-free” tracks have been established for them, restricting positions for female instructors.

While the integration of ultra-Orthodox men into Israeli society is desirable, it cannot come at the expense of women, who make up half of the population.

Dr. Yofi Tirosh, from Tel Aviv University Faculty of Law, describes the situation in an interview that appears in the February 2018 edition of Fathom magazine. The article includes a photograph showing the sign “Men Only — Entry for Women Is Strictly Forbidden,” reminiscent of the signs that used to be prominent in the American South proclaiming “Whites Only” or “Coloreds Prohibited.”

American Jews played a major role in the struggle for desegregation in the United States. Rabbi Abraham Joshua Heschel walked beside Martin Luther King on March 21, 1965 during the Selma march. Two Jewish college students were murdered in Mississippi in June 1964 for their civil rights activism. Given this history, how can we tolerate this civil rights assault on women in Israel? In the same way we have fought against racial segregation in our own country, American Jews must fight against gender segregation in Israel. We cannot be silent.

Israeli women activists told us that Jews in the Diaspora can have an impact, just as Jewish Americans affected Israel’s “Law of Return.” They pointed out how the efforts of the Orthodox rabbis to limit the definition of a Jew to an Orthodox Jew were throttled by the Diaspora. Gender segregation in Israeli society merits an equal pushback.