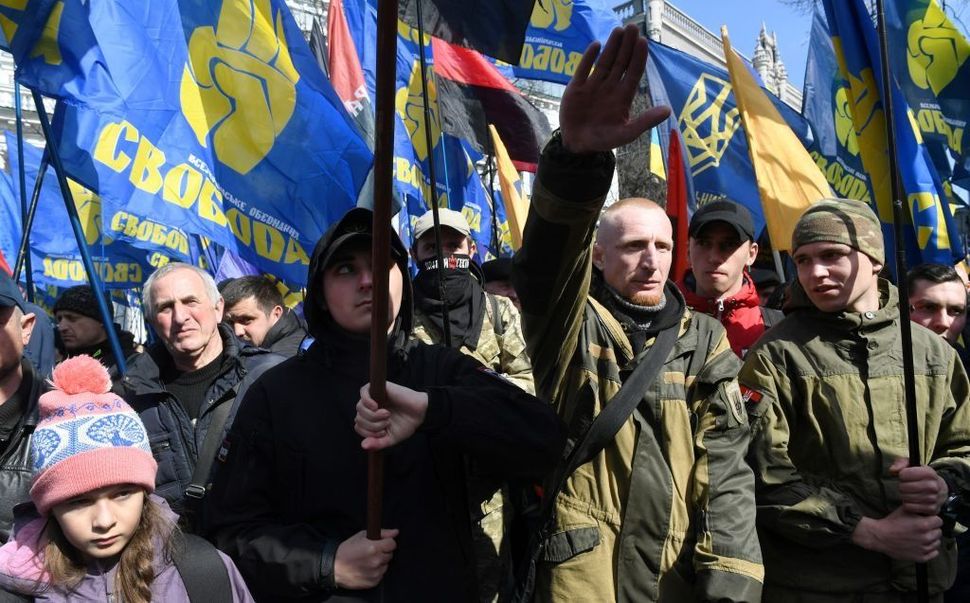 Activists of some far-right Ukrainian parties march in the center of Kiev on April 3, 2018. (Photo by SERGEI SUPINSKY/AFP/Getty Images) Image by Getty Images 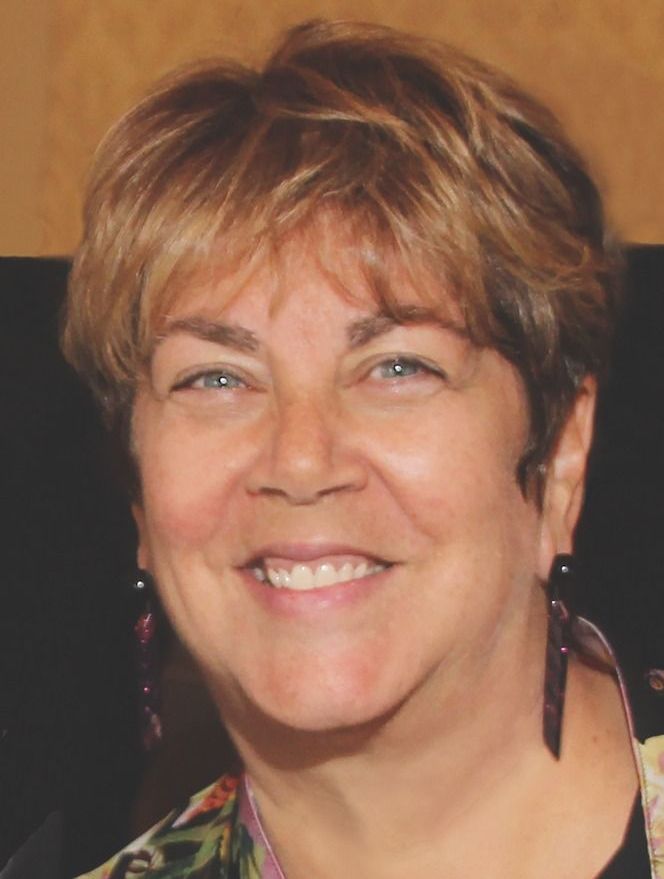 As a former Special Envoy to Monitor and Combat Anti-Semitism (SEAS) for the State Department, I remain concerned that for the past 18 months, this post has been vacant. The absence of a Special Envoy makes the media’s role of spotlighting outbreaks of hatred and anti-Semitism even more vital. This is why I was deeply alarmed to see the New York Times downplay and whitewash a neo-Nazi gang in a recent article about Ukraine.

On April 20, an organization called C14 — which has been described as having members who openly express neo-Nazi views by Radio Free Europe, among other outlets — carried out a terrifying anti-Roma pogrom in Kiev. Over the next two months, four other pogroms, including one in which a man was brutally killed and four others injured, raged across Ukraine. The outbreak of ethnic-fueled hatred was condemned by the The United Nations in Ukraine, the United States Holocaust Memorial Museum, and a joint letter by Human Rights Watch, Amnesty International, Front Line Defenders and Freedom House. All these expressed extreme concern with both the impunity of far-right gangs and the government’s lax response.

On July 21, the New York Times finally decided to cover the situation, focusing mostly on the original April 20 pogrom which had been proudly filmed by C14.

The article starts by presenting the pogroms as a he-said-she-said spat between C14 and the Roma:

“The Roma who live in tarpaulin camps and abandoned buildings in and around Kiev, the Ukrainian capital, say they make their money harmlessly by picking wildflowers and selling the bouquets to lovers on the city’s streets.

But members of Ukrainian nationalist groups say that, instead, the Roma pick pockets, steal scrap metal and foul the city with their presence, often dressed in rags or hand-me-downs while begging.”

Right away, neo-Nazi assaults on an ethnic group are depicted as a dispute in which both sides may have a point. In doing so, the article promotes dehumanizing stereotypes that portray Roma as an infestation — “foul the city with their presence” — as legitimate grievances. These vile tropes aren’t even in quotes: They’re simply stated as straight-forward reporting, which gives them even more legitimacy.

Further down, the New York Times proceeds to give C14’s leader Yevhen Karas astounding room to whitewash his gang and notes that C14 identifies themself as “an educational group that organizes lectures and seminars,” and for Karas to assert “that the episodes were not xenophobic attacks.” Karas is also given the last word: “When people look for justice,” he proclaims at the end of the article, “They come to us.”

The New York Times calls deadly, ethnic-driven pogroms “episodes” and “interventions.” The hatred behind these attacks is described as “tensions over the Roma,” as if the Roma were somehow responsible for the ambiguous “tensions.” On the other hand, the closest the article comes to describing C14’s neo-Nazi nature is by labeling them as “nationalist[s]” and vaguely hinting that some groups in Ukraine may “espouse ugly ideologies.”

In reality, Western media has long acknowledged that members of C14 espouse neo-Nazi views. The Los Angeles Times explained the group’s name as a reference to the infamous 14-words slogan of white supremacy. And in 2014, the BBC had a short video featuring Karas, a swastika and neo-Nazi symbols. In the video, which is clearly titled “Neo-Nazi threat in new Ukraine,” Karas speaks about being concerned with Jewish control over Ukraine.

Ironically, the New York Times article itself is accompanied by a photograph of C14 members giving Nazi salutes.

Last year, much of America, including the New York Times editorial board, condemned Donald Trump’s “both sides” remark in wake of the deadly white supremacist rally in Charlottesville, Virginia. It’s hard to imagine Western newspapers running a story about Richard Spencer or David Duke in which the men are given ample space to whitewash their hateful ideology, ethnic-driven attacks are softened as “episodes” and “interventions,” and vile stereotypes are presented as a legitimate side of the debate. It’s unsettling to see such grievous errors in an article about Ukrainian neo-Nazis which presumably went through the editing and fact-checking processes.

But the most unfortunate thing about the New York Times Ukraine article is how it exposes the lax standards with which Western media has treated the disturbing reality in the country.

During my tenure as Special Envoy to Monitor and Combat Anti-Semitism, I saw firsthand the neo-Nazi fervor growing in Ukraine. During one visit to Kiev, I was told that Ukraine had just finished an investigation of a complaint that Jews were kidnapping Ukrainian children to sell their organs. I call this a modern-day blood libel.

The meeting ended with the results of the investigation: 30,000 Ukrainian children were not missing. I said the meeting was over and that the investigation was absurd and ridiculous. I then raised this with the foreign minister who informed me that it was not ridiculous, that Jews have done this in the past and could do it again. Again, I walked out of that meeting.

Over the past three years, the trajectory of far-right development in Ukraine has gotten worse. The government has declared Nazi collaborators guilty of slaughtering Jews to be freedom fighters; parades to these groups are a common sight in Ukraine. Often, they are accompanied by rank anti-Semitism: In January 2017, chants of “Jews out” were heard at a torchlight parade in Kiev. According to RFE, Nazi salutes were seen when 20,000 marched last October. This April, the Anti-Defamation League’s Director of European Affairs tweeted a video of Nazi salutes as hundreds of people marched in the memory of a Waffen SS unit.

The U.S. Holocaust Memorial Museum, the World Jewish Congress and Israel all commented on the surge of anti-Semitism in Ukraine over the past year. And while the country’s prime minister is Jewish, Deputy Interior Minister Vadym Troyan has a long history of involvement with neo-Nazi gangs. In 2014, Jewish groups, including Ukrainian Jewish leaders, were appalled at the idea of Troyan becoming chief of police in Kiev; today, he is one of the most powerful men in the country. And according to the Washington Post, another extremely powerful figure, Parliament Speaker Andriy Parubiy, spent over a decade running the overtly neo-Nazi Social-National Party of Ukraine. Parubiy is no longer formally affiliated with neo-Nazi organizations, but his dark past is deeply troubling, especially in a nation where gangs such as C14 act with impunity (according to Human Rights Watch, Amnesty International and the United Nations).

It’s also important to remember that the far right groups do not limit themselves to anti-Roma hatred and anti-Semitism; gangs like C14 and others have been responsible for homophobic and sexist violence, a trend that has been alarmingly growing, according to human rights groups. By downplaying their nature, articles such as the one in New York Times endanger these other vulnerable populations.

Not only should all people of good will be condemning in the strongest terms the growth of neo-Nazis, salutes and all, but our government must fill the SEAS position I was so fortunate to hold. Without someone tasked with monitoring global anti-Semitism, it will continue to be minimized, and even ignored.

And yet, despite Western media giving plenty of coverage to the far-right in neighboring Hungary and Poland, the situation in Ukraine is often underreported. The enormous aid (including lethal aid) America gives to Kiev makes it even more imperative for Western media to have robust and discerning coverage of the country and the utmost concern for its most vulnerable groups.

Hannah Rosenthal is the CEO and president of the Milwaukee Jewish Federation.