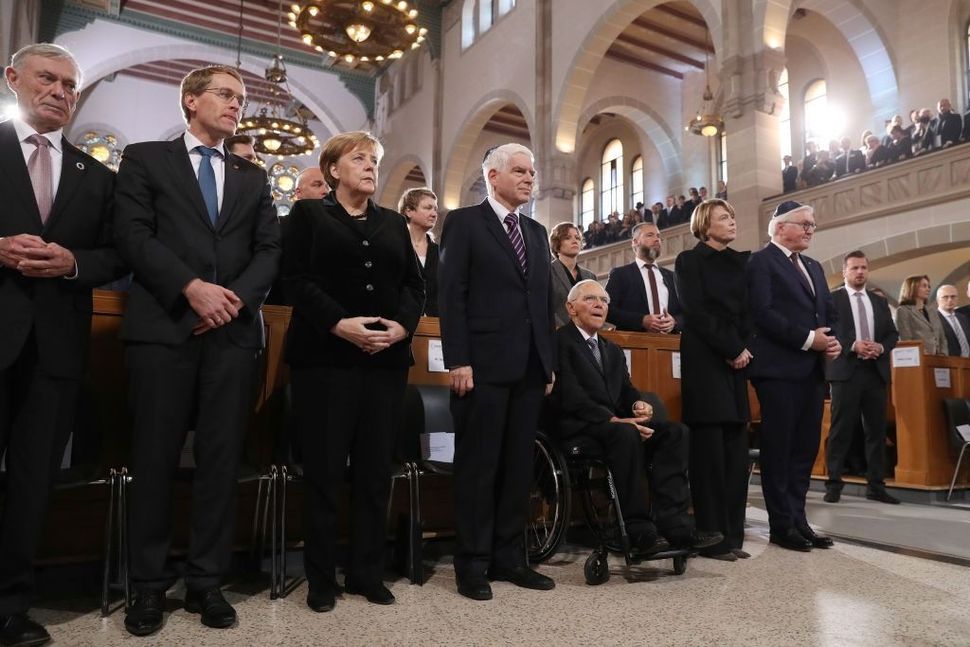 Former German President Horst Koehler, politician Daniel Guenther, Chancellor Angela Merkel and Central Council of Jews President Josef Schuster, Bundestag President Wolfgang Schaeuble, First Lady Elke Buendenbender and German President Frank-Walter Steinmeier attend a ceremony at the Rykestrasse synagogue to commemorate the 1938 Kristallnacht pogroms, also called the November pogroms, on November 09, 2018 in Berlin, Germany. During November 7-13, 1938, Nazi supporters attacked over 1,400 synagogues as well as Jewish businesses and individuals that led to the deaths of over 400 people in a violent outburst of anti-semitism that preceded the horrors of the Holocaust. Germany is officially commemorating the 80th anniversary of the pogroms today. Image by Getty Images 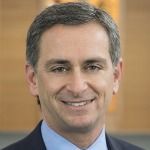 12 years ago, I met with a young German Christian woman who sought my assistance in converting to Judaism.

As I listened to her reasons for wishing to be Jewish — her marriage to a Jewish man, her partnership in raising a Jewish daughter, her affection for the customs and traditions of Judaism — I could see tears welling in her eyes.

When I inquired about those tears, the dam burst, and she began to weep openly.

“My marriage and family are inspiring me to convert,” she told me, “but my history stands in my way. How can I ever become a Jew, after the horrors my people brought upon the Jews? How can I be welcomed? How can I ever be forgiven? I can’t even forgive myself.”

“But you weren’t even born until two decades after World War II had ended. You hold no guilt for the Nazi atrocities,” I countered.

“But I feel such terrible guilt,” she lamented. “So many young Germans do. We carry the shame of being descendants of those crimes.”

I found her suffering to be at once heartbreaking and puzzling — until this month, during which I spent a week in Berlin and Dresden as part of a small delegation from the North American Board of Rabbis at the invitation of the German government.

We were welcomed for Germany’s national observance of the 80th anniversary of Kristallnacht, the state-sponsored rampage known as the “Night of Broken Glass,” which unleashed the violent persecution that ultimately led to the murders of six million Jews.

Before the commemorative events that concluded the week, we paid a visit to the Evangelisches Kreuzgymnasium in Dresden, where more than100 Christian high school students packed an auditorium to hear our stories and share their written statements of commitment to combat anti-Semitism.

The sincerity in their presentations and the heart-heavy sense of duty in their questions moved us deeply. Clearly, these teenagers carry their own shame from being descendants of Nazi crimes — but also a robust resolve to write a different story for Germany’s future.

Their determination is going to be sorely needed in a climate of escalating incitement to violence against Jews.

German Chancellor Angela Merkel soberly noted in her remarks at the national commemoration held in Berlin’s beautiful Rykestrasse Synagogue this past Friday:

“There are two urgent questions that we need to answer. First, what did we really learn from the Shoah, this rupture of civilization? And second to the first question: Are our democratic institutions sufficiently strong so that amid an increase of anti-Semitism, or even if a majority presents anti-Semitism, it can be prevented in the future?”

To be sure, Germany faces a daunting challenge, as the far-right nationalist Alternative for Germany party continues its political ascent against a worldwide backdrop of rising populist extremism, fomenting hatred directed at Jews and other minorities.

Surely, however, Germany’s leaders and citizens will be strengthened in their effort to repel this darkness by their unequivocal national reckoning with their past.

A nation that names and acknowledges its greatest instances of moral failure must certainly be much less likely to repeat them.

When the seedlings of those same evil impulses are replanted generations later, a people guided by responsibility for its history is best poised to deny those seedlings any water or sunlight.

As a Jewish American who has been blessed with freedoms and opportunities my family first discovered as Eastern European immigrants generations ago, I find myself wondering about the implications of what I observed in Germany this past week for my own country.

After all, Kristallnacht happened 80 years ago, and yet it remains a persistent subject in German schools, as well as a cause for national events of remembrance and resolve, long after the perpetrators of its crimes have died.

How might America meet its own moment of moral challenge today if our nation were to engage habitually and forthrightly in acts of collective responsibility for our past, as Germany does?

How might our national soul be impacted if our country’s brutal dispossession of Native Americans was regularly owned and solemnly commemorated?

How might our treatment of endangered immigrant populations be altered if we were consistently reminded of the moral degradation of the Japanese-American internment camps in World War II?

How might the plight of African-Americans on our streets and in our courts be aided by a sincere acknowledgment of accountability for the slave ships that brought the ancestors of many millions of our modern-day citizens to the United States in chains?

The still-piercing shame from the Holocaust felt by many in Germany today should be seen neither as heartbreaking nor puzzling.

Rather, it is a badge of enduring conscience that just may save today’s German Jews from the same hatred that engulfed the Jews eighty years ago. Might we, as Americans, similarly learn from our shared history how to steer clear of repeating our collective past sins?

The great Rabbi Abraham Joshua Heschel famously taught: “Some are guilty. All are responsible.”

There is nothing wrong with feeling the weight of responsibility bequeathed to us from our national past.

Indeed, it is noble and just to feel responsible.

A nation demonstrates its character not by declaring its exceptionalism but by striving for it. It is past time for America and Americans to do so.