When Did Jews Start Giving One Another Hanukkah Gelt? 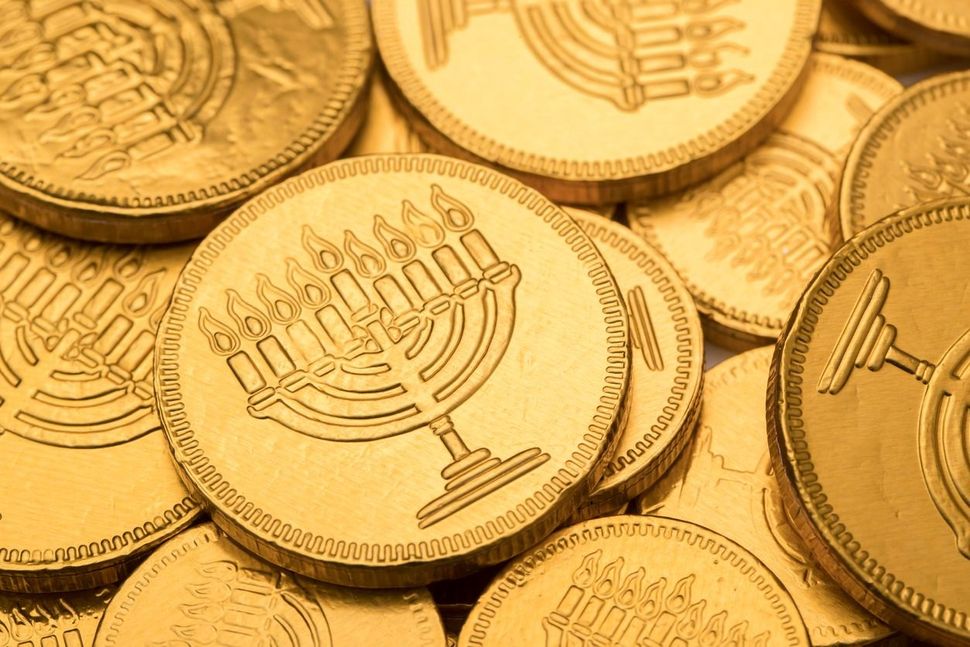 Gift-giving on Hanukkah is one of those interesting modern conundrums, something that’s always fallen somewhere between bothering me and delighting me.

Aside from inescapable disingenuousness of the Hanukkah Harry exchanges we staged in my yeshiva day school years and the slippery slope of Hanukkah gifts that seem to lead inevitably to Hanukkah bushes, Hanukkah stockings and probably mixed dancing (heaven forbid), the holiday has never struck me as one about giving.

But the spirit of generosity doesn’t strike me as particularly relevant to this holiday.

No one in the Talmudic Hanukkah story gives any gifts, unless you consider the one little cruse of oil a gift, and in that case, God is the gift-giver.

But since God makes no actual cameo in the story, the Almighty appears to be more of an absentee gift-giver.

Despite the fact that the giving of gifts is not particular to Hanukkah, the giving of Hanukkah gelt is a major feature of the holiday.

In a 1959 Yiddish lexicon of Jewish money, entitled “Yidishe gelt” by Isaac Rivkind, the longtime librarian of the Hebrew and Yiddish division of the Jewish Theological Seminary, the author opens the “Hanukkah gelt” entry with, “Hanukkah — an alter yontef. Hanukkah gelt — a nayer minhag” (“Hanukkah — an old holiday. Hanukkah gelt, a new custom”).

The origins of the custom are a bit murky, but in the 17th century, at least, Hanukkah gelt referred to money given to teachers in yeshivas to support their poorer students, especially during the week of Hanukkah.

Gelt in this sense remains prominent today: in some circles, contemporary religious custom says that on Hanukkah it is a mitzvah to support those who learn Torah in order to emphasize the defeat of the Greeks, who attempted to suppress Torah.

Unlike Purim, Hanukkah does not come with the mitzvah of matanot le’evyonim, gifts to the poor. But during Hanukkah, plenty of people for at least the last few hundred years have been happy to dote on each other amid the latkes and the candles.

By the 18th century, the custom of gelt had expanded to include requests from local Jewish figures like the maggid (itinerant preacher), the khazn (cantor), the shoykhet (kosher slaughterer), and the shames, who would travel from village to village asking for money at Hanukkah time.

Hasidic rebbes, too, who would travel to villages at holidays went door-to-door looking for a nedoveh (donation).

This changed in the 19th century, when Hanukkah gelt began to be associated with children.

The idea of giving money to children was considered absurd until industrialization and urbanization created conditions for expendable income.

So how do we understand why gelt has become such a defining feature of the holiday, despite the absence of money in the story of Hanukkah?

Hanukkah is one of only two Jewish holidays that are truly and purely celebratory. Purim and Hanukkah are the only holidays on which we traditionally use the word “freylekh” — “happy” — to greet one another.

These are also the only two holidays in which God does not explicitly play a role.

They celebrate victories in the human realm. God’s name is not even mentioned.

On all other holidays, we are encouraged to exist on an elevated level, to refrain from discussing mundane things, especially money.

But Hanukkah is a holiday for us, not for God.

It is a chance to celebrate in ways that are significant for us — and for a people with a history of debilitating economic oppression, giving and taking money from each other so freely is one way to express our celebration of being literally enriched by the experience of triumph.

The Yiddish writer Mendele Mokher-Sforim said it best: In his short story about Hanukkah, entitled “Vos heyst khanike?” (“What is the meaning of Hanukkah?”), one of the characters describes the joys of the holiday — eating latkes, playing dreydl, receiving gelt — as living “like God in Odessa.”

Though Jews are not in the habit of giving gifts per se, we do specialize in blessings. So my brokhe (blessing) for us all this Hanukkah is that we be freylekh (happy), that we triumph in our games of dreydl, and that we give and take gelt, the only dough on this holiday that isn’t fried, “like God in Odessa.”

Miriam Borden is a doctoral student and Yiddish instructor at the University of Toronto.

When Did Jews Start Giving One Another Hanukkah Gelt?