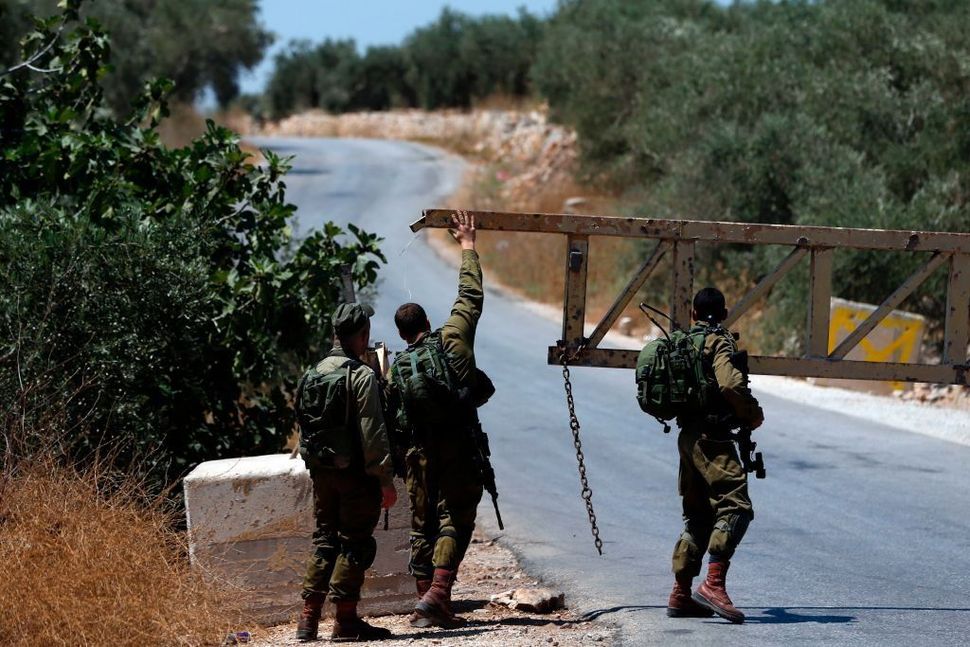 Israeli soldiers close a gate leading to the village of Deir Abu Mashal near the West Bank city of Ramallah, on June 17, 2017 Image by Getty Images 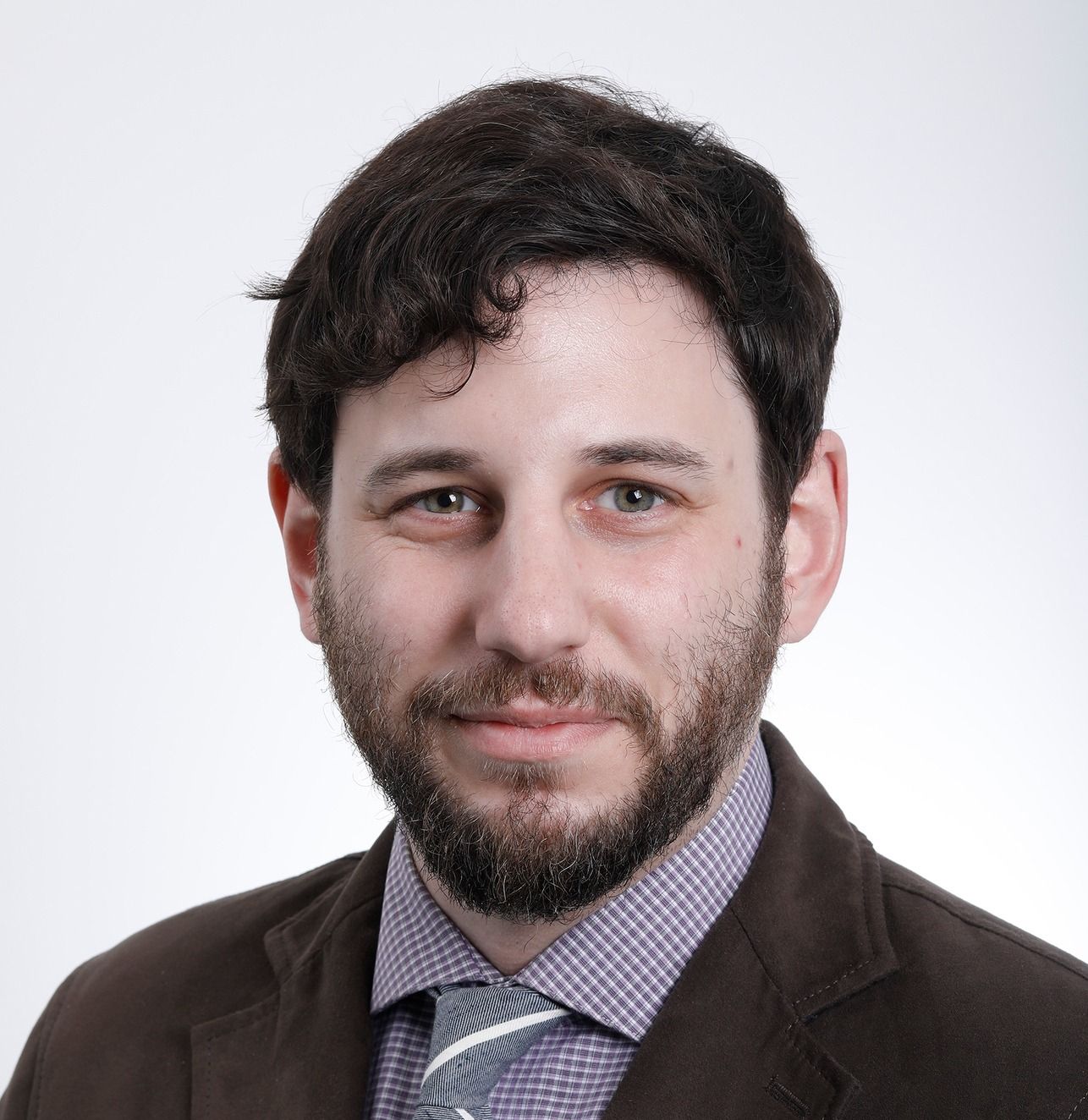 Like most American Jews, I live with the tension between Israel the dream and Israel the reality.

I remember the hope of Prime Minister Rabin approaching peace with his lifelong enemies paired with the dismay at his assassination, I believe that every person living under Israeli sovereignty should receive equal treatment, though I know that this is not always the case, and I am pained by Israel’s failure to recognize the diversity of Jewish religious practice.

This tension is far from new: It is rooted in the origins of American Zionism. Leaders like Rabbi Mordecai Kaplan, a scholar and the co-founder of Reconstructionist Judaism, described Zionism in ways that emphasized the highest ideals of both the Jewish prophetic tradition and American liberal democracy. Their intention was to defuse concerns over dual loyalty, as Noam Pianko pointed out in his book on Jewish Peoplehood.

These early American Zionists did not anticipate that their vision would leave future American Jews navigating between two polarities: A romantic ideal of Jewish statehood and the reality that Israel is a state like any other state facing challenges that belie this ideal. But the fact is that this view of Zionism is a uniquely American one. Accusations of dual loyalty were always less of a concern outside of America, where Jews were marginalized and persecuted. European Zionists put more emphasis on realizing Israel rather than on its ideal values, hoping to establish a state like any other state that would help normalize Jewish existence.

But American Zionism is about living in this tension between reality and aspiration. We always strive to build the ideal Israel while not hiding from the flaws resulting from statehood. We hope for our understanding of Jewish values will be incorporated into Israeli life while acknowledging that we are not the ones who have to live with the consequences of decisions affecting Israel’s security. We defend the right of Jews to self-determination in our homeland while insisting on equal rights for all of Israel’s citizens.

To do this in the most effective way, we have to learn about the real-life experiences and perspectives of the Israelis and Palestinians who call this place home.

I recently traveled to East Jerusalem and the West Bank with Encounter, and this experience changed my perspective on one aspect of how this tension plays out today. Over the course of four days, I heard from Palestinians about the day-to-day challenges they face living under occupation, and I was able to experience a slice of this reality for myself. I realized that simply knowing about the occupation is insufficient for understanding it; the occupation is something you need to see first-hand to appreciate its impact on Palestinian life.

As I ate lunch in a Palestinian family home in Jerusalem’s Beit Hanina neighborhood, I listened to the stories of the family’s 16-year-old son. He stood and addressed us in English, with his mother on his left and his father on his right.

He began by stating matter of factly that he would not be able to achieve his dreams in life due to “the occupation and lack of resources” in his community. His parents listened with a mixture of pride and apprehension. I could only think of my own nine-month-old daughter, the seemingly limitless possibilities in front of her and the pain I would feel from hearing her deliver a similar message at such a young age.

Another of our speakers discussed the way time is used as a weapon in the conflict, from seemingly arbitrary delays in bureaucracy to the placement of physical checkpoints that impact freedom of movement for Palestinians. Because he is only able to use certain West Bank roads, it took him almost two hours to travel from his home in Ramallah to our meeting place near Bethlehem, a distance of about 20 miles. His return journey took 3 hours because checkpoints that were open on his way to us were closed on his way back.

A few days later my group was traveling from Ramallah to Jerusalem, less than 12 miles as the crow flies. Yet because one checkpoint was closed and we had to change our route, and what should have been a 20-minute bus ride took two hours.

But experiencing these delays from the comfort of a charter bus is nothing compared to experiencing them on foot. At one point, our group attempted to enter Israel proper through Checkpoint 300 near Rachel’s tomb. Unfortunately, only one of the security windows was open, which caused a significant backup. We stood in line as Palestinians old and young milled about, some poking ahead trying to determine the cause of the delay. It was clear from their reactions that this was not normal. At one point, a young woman in a pink jacket walked back from the front of the line in tears. I don’t know what happened to her, but the look on her face could only be described as helpless, and I struggled with my own inability to do or say anything to console her.

Our group decided to abandon our plan of walking through, both so that we could continue our day and so that we did not further delay the Palestinians who need to pass through the checkpoint and had no such alternative.

There are many ways in which Israel acts like any other modern nation working to protect its citizens. And yet, looking at the occupation firsthand was so overwhelming that it was difficult for me to connect the reality of Israel to Israel the dream. This was deeply painful: My connection to Israel is rooted in this ideal and aspirational Israel as an embodiment of Jewish values. The more I saw Israel acting as a state like all other states, the less I was able to see its Jewish character and the harder it was to feel a personal connection.

As I was driving into Ben-Gurion airport to return to Boston, seeing the security guards with the Israeli flag sewn onto their uniforms reminded me that Israel is still a Jewish state and that Israel has been the locus of Jewish self-determination throughout history.

I believe that American Jews do have a role to play in this story, but to be productive members of the Jewish national collective, we must see all facets of Israel. We should be proud that Israelis feel a sense of honor in defending a Jewish state that we are connected to, but we also have a responsibility to understand the impact that country has on Palestinians.

We should all make the effort to see, and not just hear, about the occupation.

Israel is a state like any other state, but it is also our state. Its failure to live up to our dreams is not a good reason to stop dreaming.