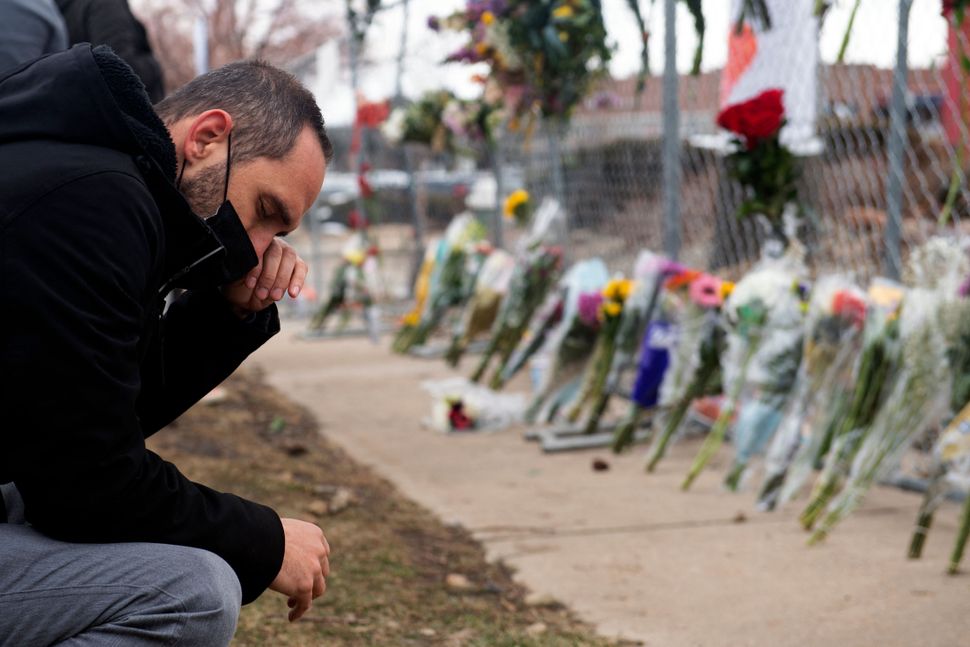 People pay their respects on March 23, 2021 to the ten victims of a mass shooting at a King Soopers grocery store in Boulder, Colorado. Image by ASON CONNOLLY/AFP via Getty Images

Yesterday afternoon, I learned of an active shooter at Kings Soopers Supermarket from a 9 year-old. Yes — a 9 year-old boy who had been on his mom’s iPad playing games when the Huff Post alert crossed the screen.

Later in the afternoon when talking with a parent, she said her child seemed less shocked and traumatized than she was. Why I asked? Her answer: Oh, he has done active shooting drills in school and is aware of guns shooting and killing people.

Once again, I was shocked.

While I am shocked at the prospect of an active shooter entering a supermarket where I have often shopped, these young people are more immune to shock when fatal gun violence enters their space—-their movie theaters, their schools, their houses of worship and their supermarkets.

I am stunned, saddened by the world you, our children and I are living in.

These past few days, as Passover approaches, I am thinking of the Four Children of the Haggadah. They are introduced as the one who does not know how to ask a question, the simple one, the wicked one and the wise one. I feel as though I am cycling through these children as I try to process the violence and death that has now come to my backyard. At first I was simple—stunned, speechless, and mute as I watched the images on my screen of an active shooter, of Kings Soopers, of Boulder Police everywhere.

Then, like the simple child, I kept on asking seemingly simple questions: Why did this happen? How could this happen? Why would he do this? Although I knew better, I wanted quick answers.

I touched the wicked child in myself. With anger, I started to blame those I hold at fault! Not a righteous anger, but a vengeful anger.

Then in the morning after the names of the dead were released, I began to ask the questions of a wise child. Tell me of our programs to help those with mental illness? Are they adequate? Tell me how assault rifles are so easily and so quickly purchased? Tell me- what can I, one single individual, do to comfort those who are in shock and emotional pain? Tell me why do people with mental illness have access to guns?

These past 24 hours, I have been cycling through the perspectives of all Four Children.

Friends, finally I hope that we have not become like the Israelites who had grown accustomed to their slavery, to their status quo, a status quo filled with violence and persecution. May we who are caring cry out loud enough so that the Compassionate One hears us and gives us the confidence, stamina, leadership and righteous indignation to end this senseless gun violence with its plague of death, pain, trauma and destruction. May their memories be a blessing and may we have the courage to repair this broken world.