What do Yom HaShoah and Earth Day have in common? 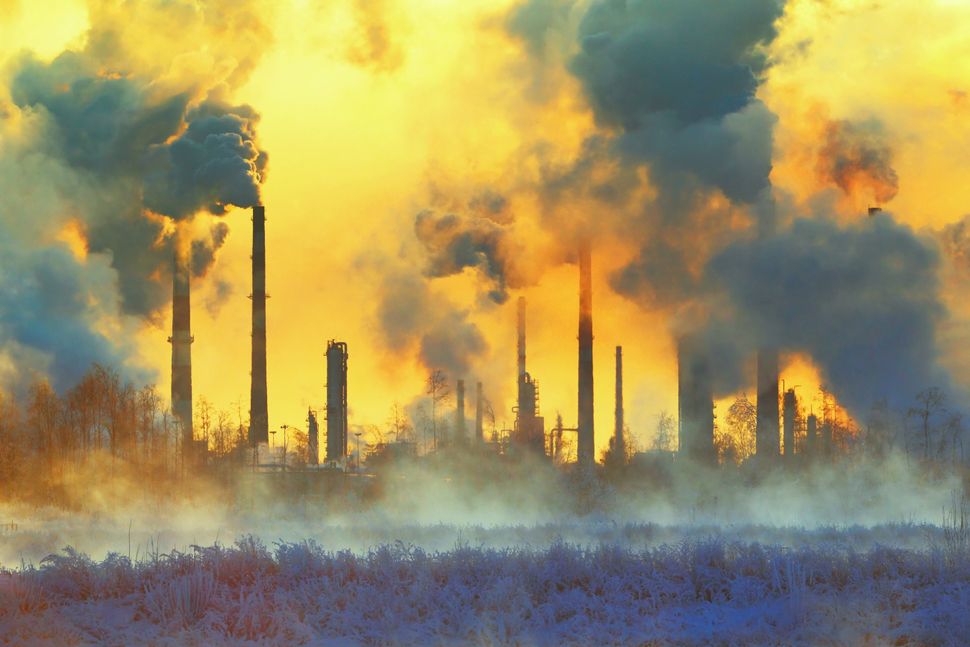 On Yom HaShoah, I often think of the death camp chimneys that the poet Nelly Sachs so vividly depicted: “O the chimneys/on the ingeniously devised habitations of death/When Israel’s body drifted as smoke/through the air.”

But this year, I also thought of other chimneys— such as the smokestacks of factories, power plants, and automobile exhaust pipes. Why? Because in the days just prior to Yom HaShoah, our planet broke records. On April 7 , the National Ocean and Atmospheric Administration reported that “carbon dioxide levels are now higher than at anytime in the past 3.6 million years.”

While the timing of this news only coincidentally intersected with Yom HaShoah, this coincidence made me realize how our commemorations of Yom HaShoah should influence our approach to Earth Day.

Firstly, both ought to remind us of the destructive potential of denial. Even as reports about the Nazi death camps multiplied, individuals and governments remained deep in denial. Some ignored the witness of their own eyes, while others read reports but dismissed them as dark fantasies or wild exaggerations. Even today, Holocaust deniers continues to spew conspiracies.

Similar conspiratorial thinking is utilized to deny report after report of climate change and the destruction it is wreaking. Many of us have seen the wildfires or survived the hurricanes that climate change has spawned. A well-funded industry of denial, however, continues to prevent serious action. But their lies should not confuse us — we have the proof, and we need to act.

Moving past denial is a start — but it isn’t enough. Yom HaShoah also teaches us the high cost of standing by. During the Shoah, there were people — even whole nations — who realized what was going on but declined to get involved. Action was too risky. And for some, the Jews weren’t worth taking any risks.

We hear the same arguments about climate change today. It will just be too costly to act — even though inaction becomes more costly with each new fire or storm. Or “others” should act first. But there are no “others” to count on — our whole planet must work together if we are to have a viable future.

The final way in which Yom HaShoah speaks to Earth Day is the level of attention and urgency that it demands. We can’t afford to make addressing the unfolding crisis of climate change a secondary priority. Toward the end of World War II, the United States had the ability and opportunity to take such actions as bombing train lines camps and otherwise disrupting the death camps. But we delayed taking such actions — and in the meantime, hundreds of thousands of Hungarian Jews were brought to the camps and killed, even as the German armed forces were collapsing.

Today, deadly consequences loom because of delays in dealing with the climate crisis. Each day of inaction brings us to a new level of unavoidable consequences: more fires, more heat waves, more vector-borne diseases. And each day of inaction also ups the cost. Not just the price tag of disaster recovery, but also the cost of societal upheaval that we will face because present inaction means that any future actions must be swifter and more severe. As the pandemic showed, taking smaller steps earlier on can reduce the need for more drastic action down the line. But too often, we refuse to take even small steps — and if this stasis continues, we will yet against see far too many needless deaths.

I hope that this Earth Day marked the start of serious, concerted efforts to transform our society, so that by the time the next Yom HaShoah comes, we building a just and sustainable future, rather than devices of death.

Rabbi Daniel Swartz serves as the Executive Director of the Coalition on the Environment and Jewish Life.

What do Yom HaShoah and Earth Day have in common?