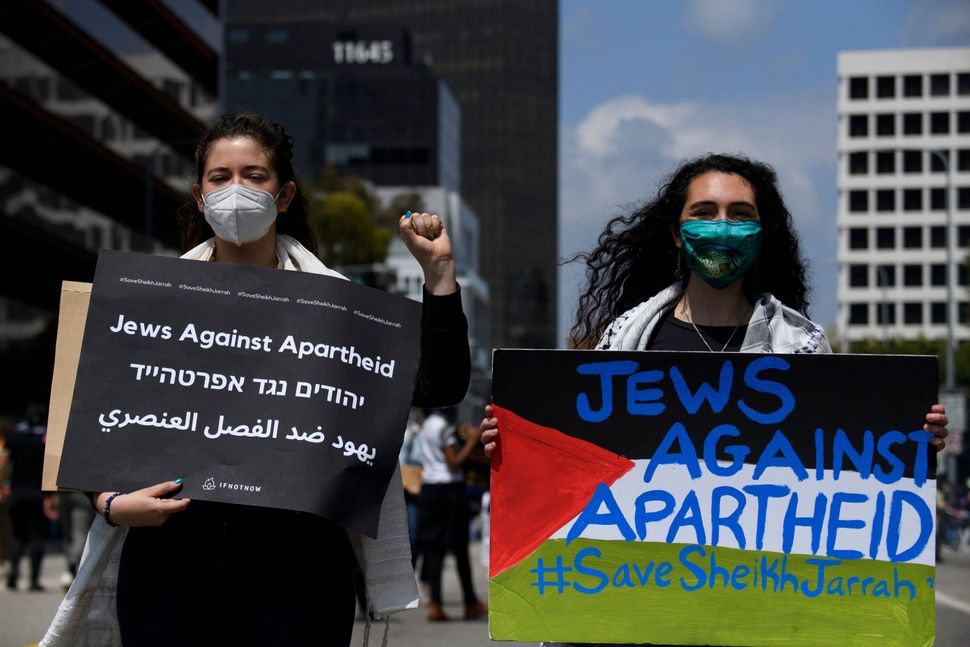 Rally and protest outside the Consulate of Israel on May 15, 2021 in Los Angeles. Image by PATRICK T. FALLON/AFP via Getty Images

I know that these past several days have been particularly challenging as we have watched the suffering and responses in Israel and in Gaza. Like you, I have been speaking and communicating with family and loved ones in Israel, reading testimony from Israelis and Palestinians, watching endless videos of destruction and violence. I struggle – as I know many of you do – to hold to a vision of an Israel living in peace, justice and security, and a reality in which Palestinians in Gaza and the West Bank do the same. I hold to Israel’s Declaration of Independence’s goal of an Israel in which all of its inhabitants, Arab, Jew, Druze, Bedouin, all flourish and contribute to the vitality of this beloved and ancient land.

Many of you know that as Dean, I work to maintain a rabbinical school in which multiple views can sit side by side, can debate and discuss in an atmosphere of mutual respect and open exchange. A few days ago, a small number of Ziegler students signed a letter expressing solidarity and concern for Palestinian civilians, opposition to the occupation and its implications for Palestinian life. While the vast preponderance of Ziegler students did not sign the letter, the fact that a few did linked the School with that position publicly, which impels me to respond on behalf of the School.

Let me be clear: faculty and students have a precious right to free speech. The Ziegler School cherishes that right and the vigorous exchange of ideas that is the hallmark both of rabbinic Judaism and also of the Academy. There is no room for any “cancel culture” at Ziegler. Indeed, I am proud of the many ways that Ziegler faculty and students have taken bold positions, mobilizing Torah and traditional teaching – in print and in person – to address what they perceive as social ills and moral mandates. It is essential to a vibrant Judaism that we lead and speak and teach. That is not in contention.

As your teacher, as your dean, as a rabbi, I feel compelled to address what feels to me like an imbalance and a lack in the letter that moves it beyond the normal circle of diverse opinion.

The letter spoke from the heart about the suffering of Palestinian people – both from this recent conflict, and from life under occupation. I share this concern and admire centering the humanity and suffering of Palestinians, too often ignored. But the letter was shockingly silent about the suffering of the Israelis and the relentless terror they face daily. The letter speaks poignantly of the large toll on Palestinian lives and property, but says nothing about the toll – psychic, physical, and social – on Israelis. They too are humans. Indeed, they are our family and our people. Their suffering is too often marginalized or justified. It was in this letter.

There wasn’t a word about the murderous tyranny of Hamas, which holds the Palestinian people in hostage and terror. These terrorists have diverted millions to build elaborate electronic tunnels whose only purpose is to kidnap and murder Israeli civilians, which diverts millions to build and launch deadly missiles aimed randomly at Israeli civilian centers, and which hides its military and terror operations behind civilian residences and businesses.

There was no word about the decades-long ways that Arab dictatorships have imposed the continuation of occupation, by denying Palestinians citizenship, by maintaining an implacable vendetta against even the possibility of Israel’s survival.

There wasn’t a word about Ahavat Yisrael – a love and solidarity with our fellow Jews in Israel, with the right of the Jewish people to self-determination in our own homeland, to the very real sacrifices this experiment in Jewish national self-expression has imposed from its inception.

There wasn’t a word about the ever-present antisemitism that is patently visible in social media, in beatings and murders of Jews around the world, in slogans chanted at rallies claiming to be pro-Palestinian, in public calls to kill the Jews.

There was a partial application of the Jewish recognition that all people are made in God’s image, specifically about the value of Palestinian life and longings for freedom. I share that affirmation; we need to say it more often, explicitly, and in public. But there was no affirmation of love for the Jewish people, of which we are a part and which we aspire to lead. If a rabbi does not root their leadership in love and unity, they lose the ability to critique constructively, to encourage doing better, to inspire.

There was no recognition that there are many good and caring people who are devoted to our School and who make our learning possible – through their leadership, their generosity, their advocacy – people who share with me a visceral identification with Israel and the Jewish people would feel betrayed by the partisanship, omissions, and oversimplication of the letter.

There was no centering of brave Palestinians and Israelis who have been risking the work, year after year, of peaceful advocacy for coexistence, mutual democracy, respect, and non-violence. These brave people hold the possibility of a two-state solution in which both peoples live in peace, justice, and safety. They do so at great personal risk. Centering (or even some recognition of) their pioneering work and their commitment to mutual listening, mutual support, would have been fitting for people preparing for a life of rabbinic service.

I know that claims of being pro-Israel has been weaponized by those who advocate a particular version of Zionism and nationalism. I decry the partisan smothering of the diversity of ways to love and support Israel. That reality makes this response even more complex. But I insist on owning the possibility – the necessity – of an authentically liberal Zionism, one that sees a democratic Israel side by side with a free Palestinian people, each committed to peaceful coexistence. There is no other way.

To advance that vision will require a commitment to hear each other’s stories, to absorb each other’s realities. It does not advance peace or justice to simply parrot one side’s tale of victimization. And it does not demonstrate Jewish leadership or values if they are not rooted in a love for the Jewish people, a visceral connection to the one Jewish nation in the world.

I pray that we will be able to learn from each other, to sensitize each other, to insist on an ability to celebrate and affirm our Jewish people and our Zionism. Let us continue to advance the human dignity of Israelis and Palestinians, the miracle of a free and democratic Israel along with aspirations for freedom and self-determination for a democratic Palestinian people.

May the God of Abraham, the father of Ishmael and of Isaac, grant us the wisdom to be disciples of Aaron, loving peace and pursuing peace, defending our homeland as a catalyst for renewed Jewish life, and reaching out the hand of friendship and partnership to Palestinians who share our commitment to nonviolence, self-determination, and justice. May the One who makes peace in the heavens, grant peace to us, to all Israel, and to all humankind.