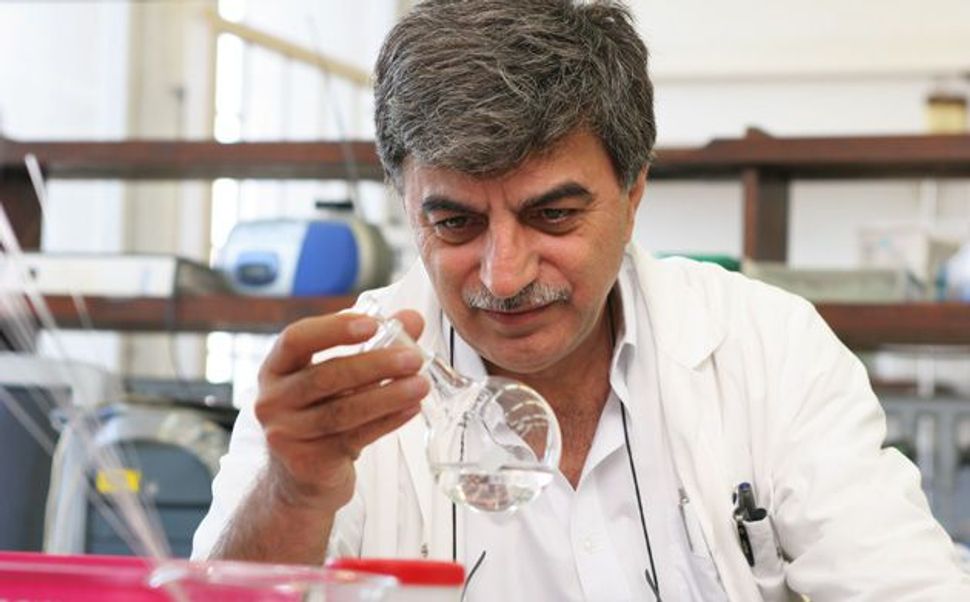 Something New: Timor Baasov has modified a highly toxic antibiotic so that it might be used to repair genetic mutations. Image by COURTESY OF THE AMERICAN TECHNION SOCIETY

A team of researchers in Israel has made a breakthrough in modifying an until-now highly toxic antibiotic so that it might one day be used to repair defective genes that cause diseases such as cystic fibrosis, Usher syndrome, Duchenne muscular dystrophy and even some cancers.

Timor Baasov, a professor of chemistry at the Technion-Israel Institute of Technology, has been able to modify the antibiotic gentamicin so as to make it both effective in treating a certain type of genetic mutation and nontoxic enough so that it might be tolerated by humans when ingested on a regular basis.

“Gentamicin is very toxic, and it itself cannot be used for treatment,” Baasov said. “We chemically modified it and generated a new compound with a much lower toxicity.”

The new compound is called NB54, and Baasov has been able to demonstrate its effectiveness in treating test tube cell cultures taken from patients with cystic fibrosis.

Baasov and his team published their findings online in March in the Journal of Medicinal Chemistry. Since then, a team of researchers at the University of Alabama, led by David Bedwell, has had promising results using NB54 in a live mouse.

“We have very good data, very promising data from the in vivo experiment,” Baasov said, commenting on his collaboration with Bedwell.

NB54 works by allowing cells to read through a type of mutation called a premature stop mutation, a random piece of scrambled genetic code that stops the cell in the middle of making a healthy protein. “It’s like a train going down a track and then suddenly stopping dead before it gets to the end of the track,” Bedwell said of the mutation’s effects. NB54 allows the cell to continue and complete the necessary protein.

Bedwell, a professor of microbiology and genetics and an expert in stop mutations, said that this type of mutation is responsible for between 10% and 15% of all genetic diseases and usually results in the most severe forms of a particular genetic disease.

A second lab at the Technion in Haifa has tested NB54 on another disease arising among Ashkenazic Jews, Usher syndrome, which causes deafness and progressive blindness. Tamar Ben-Yosef, a senior lecturer in the faculty of medicine at the Technion who in 2003 discovered the mutation responsible for Usher syndrome type I — the most severe form of the disease — in Ashkenazic Jews, has tested NB54 and found it was able to suppress the mutation in cell cultures.

“I want to stress that we are very, very far from testing it on human beings,” cautioned Ben-Yosef, who recalled that her frustration over finding the mutation but having no cure for the disease led her to partner with Baasov’s lab. Nevertheless, she called NB54 a breakthrough, because it’s the first time a chemist “used his knowledge of chemistry to modify this compound in a rational way for the desired effect.”

“NB54 is not a final solution,” Bedwell remarked. “We need to keep going to improve it.”

Scientists proved some years ago that gentamicin allows cells to read through stop mutations, but its toxicity remained an issue. Gentamicin is one of a class of highly toxic antibiotics called aminoglycosides that doctors only use as last-resort drugs when all other antibiotics have failed to be effective. Taken in the doses necessary to kill bacteria, gentamicin is tolerable by humans. But taken on a regular basis over a lifetime, as would be required to treat a chronic genetic disorder, gentamicin could lead to hearing loss, kidney failure and even death.

Baasov, who has been working with aminoglycosides for some five years now, has found that by stripping gentamicin of its antibacterial properties it remains effective in suppressing stop mutations, but becomes much less toxic for humans. Since announcing his findings in March, said Baasov, he has had inquiries from labs around the world eager to test out his compound.