The Zen of Kosher Scotch 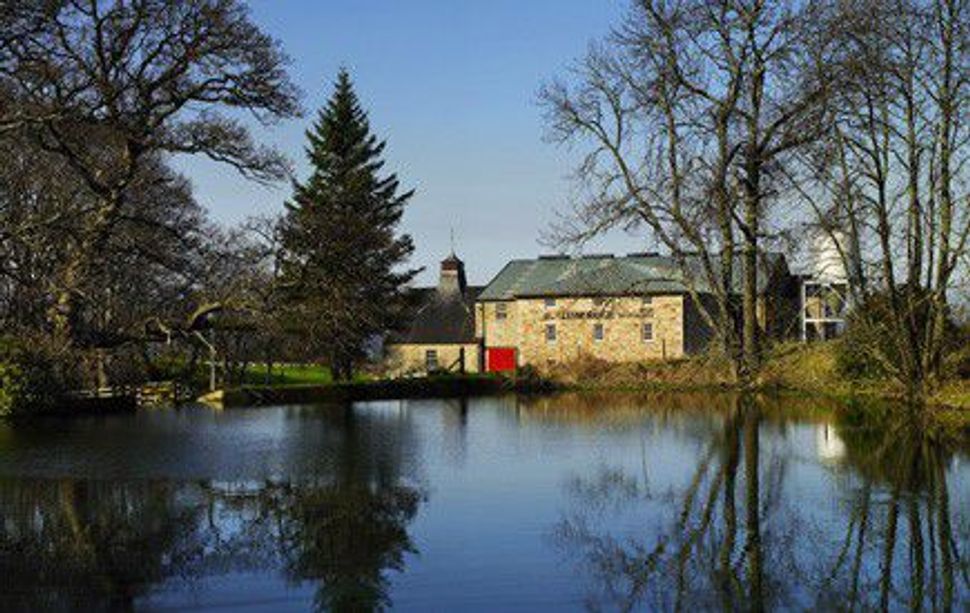 As anyone who has visited the dry garden at the Zen temple Ryoanji, in Kyoto, Japan, can tell you, it’s not just the raw materials that make a site worth visiting. If raked gravel were all it took to attract tourists, then the world’s quarries would be mobbed. Likewise, the aura that surrounds Scottish whisky distilleries goes beyond their relatively unprepossessing appearance and explains why visitors are increasingly drawn to the remote north of Britain. In recent years, kosher whisky tour groups have been among the buses pulling up into small parking lots located 600 miles, or more, north of London.

Stretching from Speyside to the Western Isles to the Highlands, Scotland’s 103 distilleries produce whiskies with a variety of flavors and characteristics. Whiskey (with an “e”) is made by distilling fermented mash from a variety of different grains. But Scotch whisky (no “e”) uses only barley and water, so any variations come from the process and the barrels in which the maturing whisky is stored.

On a recent trip to Britain, I visited the Glenmorangie distillery on the East Coast, just outside Tain, near Inverness. Made up of four homely buildings strung between the winding route of the A9 and the swampy shore of Dornoch Firth, it resembles nothing so much as a farmhouse or rural middle school complex, built from local stone.

The first building to meet the eye is the old malting house with its distinctively raked roof, which now houses the offices. No malting is done in situ any more since, as with most contemporary distilleries, the barley now arrives already malted to exact specifications.

Next to the malting house a new, two-story building sits unobtrusively. In here the barley is transformed through the addition of water, yeast and heat into the pungent brown “wash,” which then flows toward the still hall — by far the most impressive room in the complex.

Controlled by a state-of-the-art computer console, and with a row of four gleaming brass stills on either side fed by Victorian plumbing that reveals fluids in various stages of distillation, it is steampunk manufacture at its finest. In here, the wash is double-distilled — in the evocatively named “wash” and “spirit” stills — until it is ready to be put into barrels. The barrels are then stored in surprisingly roomy dark warehouses low down by the side of the firth.

Glenmorangie was founded in 1843 by William Matheson, who bought gin stills and adapted them to the production of whisky. The height of these unusually tall stills, the distillery claims, allows the reclamation of the floral vapors that give the basic spirit its distinctive flavor.

The company was eventually bought by the MacDonald family and, for 150 years, the distillery put together a distinguished series of whiskies before it was bought in 2004, along with Ardbeg distillery (in the Western Isles), by the French luxury goods outfit Louis Vuitton Moet Hennessy.

Glenmorangie’s recent kosher certification is fairly unapologetically linked with its new building and its concomitant 50% increase in capacity. Dr. Bill Lumsden, the charismatic head of the distillery, was happy for the extra market, and given the strict purity of the ingredients and process, was never worried about the outcome.

Glenmorangie is just downhill from Tarlogie Springs, from where it receives its pure, clear water. But, though the barley mixture runs through copper mash tuns, miles of pipe and tall stills, the main ingredient added at the distillery is time. Scotch isn’t scotch until it has sat for five years, and the best sits in a variety of barrels for 10 years or longer. The warehouse has a faint scent of the whisky lost to evaporation, known, in delicate homage, as “the angel share.”

The barrels in which whisky matures are the only real obstacle to whisky’s kosher status. With more rabbinical rules governing the production and consumption of grape-based drinks than grain-based ones, there is an argument that the sherry, port and brandy that originally sat in barrels, now imparting flavor to mature whiskies, all need to be kosher. Even at Glenmorangie, a smallish distillery, there are an impressive number and variety of barrels to check on.

Essentially small 19th-century factories built to convert barley into a potent alcoholic drink, contemporary distilleries house modernized versions of ancient farmhouse techniques for turning excess crops into something to keep the cold, dark, damp Hibernian winters at bay. During this process of systematization, the name developed from the Scottish Gaelic uisge beatha (“water of life”) into the more recognizable “whisky.” Because the ingredients are so minimal, a number of these factories have sought a hekhsher to show that their whisky is kosher and to mark it out for Jewish whisky drinkers.

Ironically, it was external regulation and certification that created modern Scotch whisky, and its attendant industry. For centuries, Scottish farmers had been making moonshine, but after the 1707 Acts of Union, which legally joined England and Scotland, the intrusion of the British state made that harder. After a century of conflict over production and taxation, the 1823 Excise Act largely put a stop to illegal pot stills and regulated the bottled whisky. This meant that the British government could tax it, and that whisky could be produced and sold locally, nationally and internationally, like any other good. It also led to a systematization of the distillation process so that, for the first time, you could drink your whisky safe in the knowledge that it wouldn’t make you go blind or kill you.

By the turn of the 21st century, scotch had become a global byword. Like the Gideon Bible, it waits for you in every hotel. Propelled around the world by the British Empire, aided by the phylloxera epidemic’s destruction of French wine production in the 1880s and ruthlessly marketed in the Internet age by multinationals who recognize its distinctive brand, scotch connotes purity, luxury, tradition, nondenominational whiteness and a contemplative Western masculinity. It is these qualities that make whisky especially attractive to Asian and Jewish men, whom Western stereotypes have marked as effeminate outsiders.

For a world in which complex processed foods are churned out instantly to last forever, and eco-tours threaten the destinations they celebrate, kosher whisky tourism is a fascinating alternative. All air travel burns oil, but what could be more quality-conscious and eco-friendly than a busload of Jews heading to a generally inhospitable area of the world on the verge of the Arctic Circle to witness a few hours of a minimalist production process that takes more than 10 years?

Read Dan’s tasting notes from his visit to Glenmorangie.

The Zen of Kosher Scotch