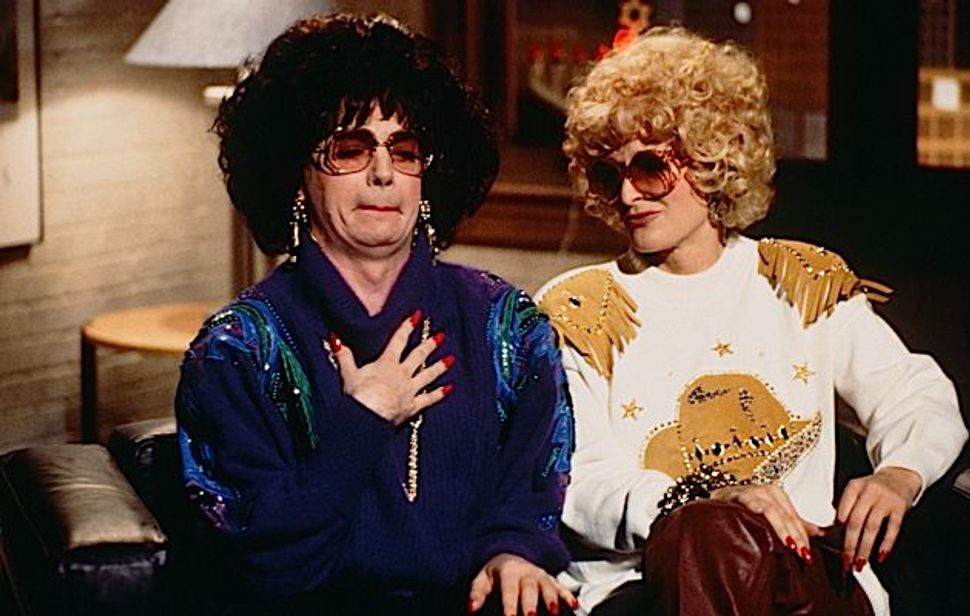 A Little Farklemt: Mike Myers as Linda Richman (here with Glenn Close as Judy on ?Saturday Night Live? in 1992) made the prefix famous. Image by Norman Ng/NBCU Photo Bank

Here’s a question from Eugene Fidell of Yale Law School:

“Many Yiddish words begin with the prefix fer-, such as ferklemt, ferblondzshet, ferkakt, ferdreyt, fermisht, etc. What’s the common denominator? Is there a linguistic connection to the series of English words that includes ‘forgo,’ ‘forbid,’ ‘forget’ and ‘forswear’? Something tells me that these two sets are connected, however remotely.”

Mr. Fidell’s intuition is better than his spelling, which, like that of many American Jews, changes Yiddish far- into fer-. (It’s farklemt, farblondzshet, farkakt, etc.) Most probably, this happens because there is a similar tendency in American English, in which words like “forget,” “forbid” and “forgive” are commonly pronounced “ferget,” “ferbid” and “fergive.”

But let’s get back to Mr. Fidell’s intuition. The far- in a word like farklemt and the “for-“ in a word like “forget” are indeed connected, although less obviously than might appear at first glance.

It’s easy to see why Mr. Fidell suspected such a connection. After all, consider his list of Yiddish words: farklemt, heavy-hearted or oppressed-feeling; farblondzshet, totally lost; farkakt, literally, defecated on, and figuratively, messed up or screwed up; fardreyt, literally, twisted out of shape, and figuratively, flustered or harried; farmisht, confused. Each of these words describes an undesirable state of some kind.

And now consider such English words as “forget,” “forbid,” “forgo” and “forswear.” They, too, strike a negative note. In the last three of them, the “for-“ prefix seems to reverse or change for the worse the meaning of a verb to which it is attached. To forbid someone to do something is the opposite of bidding him to do it. To forgo is to choose not to go somewhere or do something, as when one forgoes a party to which one is invited. To forswear is to swear off or swear falsely. And to forget, though its origins are less apparent, presents a similar case, since it derives from Old English gietan, to grasp or hold, and originally meant failing to hold on to something.

English does not have a large number of words beginning with “for-.” Yiddish and German (in which the prefix is ver-, with the “v” pronounced as an “f”) both do. In fact, my German-English dictionary has no fewer than 22 pages of ver- words! In many of them, ver- has the same sense of reversal that “for-” has in English. Thus, for example, whereas bilden means to shape or to fashion, verbilden is to deform; drucken means to print, and verdrucken, to misprint; raten, to advise, and verraten, to betray.

And yet this is far from being the most common function of ver- in German. It has other, more frequent effects. One of these is to create a transitive verb from an adjective or noun, as in dunkel, dark, and verdunkeln, to darken or obscure, or fremd, strange, and verfremden, to alienate. Another is to intensify the meaning of an already existent verb. Thus, for example, we have fallen, to fall, and verfallen, to molder or decay; ehren, to honor, and verehren, to venerate; dursten, to thirst, and verdursten, to die of thirst.

Although in Yiddish, too, far- has all these functions, the far- of farklemt, farblondzshet and the other words cited by Mr. Fidell is not the far- of reversal like the “for-” in English “forbid,” but the far- of intensification or transitivization. In the verb farklemn, far- is combined with klemn, to pinch; in farblondzshen, with blonzhen, to ramble or wander off the path; in farkakn, with kakn, to defecate; in fardreyt, with dreyn, to twist; in farmisht, with mishn, to mix.

You may wonder how the same prefix can have such different meanings. Ancient Greek, a better documented language than the ancient Teutonic from which both German and English descend, helps answer this. The Greek para, a cognate of English “for-” and German ver-, can have the sense of “alongside,” of “toward,” of “beyond” or of “against,” all inherited from a conjectured word per that indicated motion in Indo-European, the prehistoric ancestor of nearly all the languages of Europe. Per’s meaning of moving against something gave it the function of reversal that it has in “forbid” and verraten. Its meaning of moving beyond something accounts for its acting as an intensifier in verfallen and verehren. And its meaning of moving or pointing toward something is what makes it a transitivizer in verdunkelm and verfremden.

It is this last meaning that explains why, spelled with an “e” as “fore-,” the same prefix in English also indicates anticipation of a future event, as in words like “forebode,” “forecast” and “foreshadow,” or else the front or start of something in words like “foreground” and “foreplay.” As vor- rather than ver-, it can have the same function in German, as it also can in Yiddish in words like forhoyf, forecourt, or forhang, curtain (that is, something hanging in front of something else).

That’s a lot of mileage to have gotten from one little Indo-European word. On the other hand, it’s had a long time in which to travel.