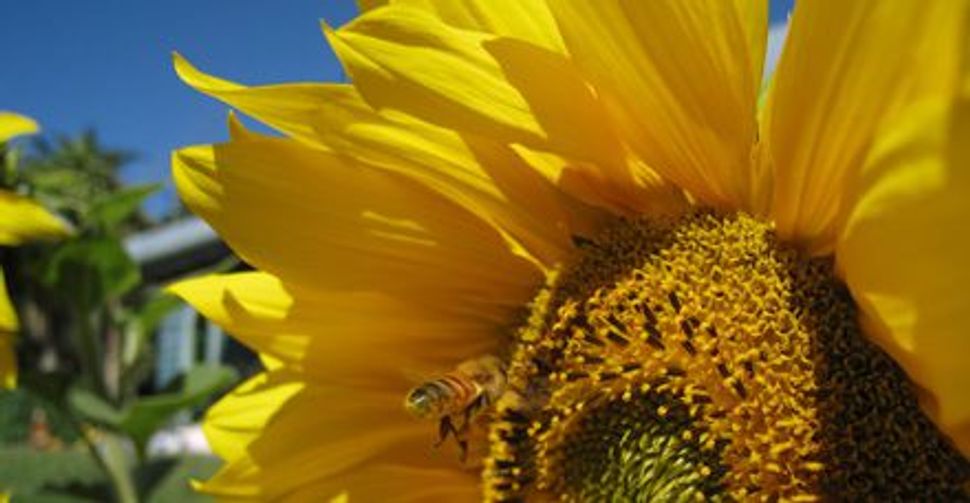 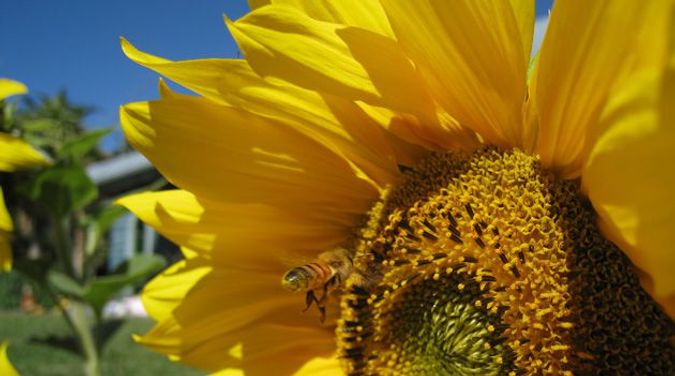 Getting honey for Rosh Hashanah is the least of your problems.

Since 2006, farmers and scientists have been worrying about colony collapse disorder — the name of a mysterious syndrome which has killed 5 million bee colonies and literally billions of bees in North America. This is a big problem, and not just because of the honey. As noted food activist Michael Pollan points out early in the film, “Queen of the Sun,” 40% of our food comes from bee-pollinated harvests. If the bees die, we’re stuck eating bread or oatmeal all the time — or not eating at all.

A film that has an opening featuring a woman dancing in slow motion, clothed mainly in bees, is aiming at a certain sort of audience — one that, frankly, is likely to believe its premise: the bee preaching to the bee choir. And this does the subject a disservice. Director Taggart Siegel, who in 2005 made the well-received movie “The Real Dirt on Farmer John,” is a qualitative, not quantitative filmmaker. For “Queen of the Sun,” he finds a cast of quirky beekeepers whose testimony inspires, but does not convince. Siegel shows the danger and explains how bees and the bee industry work, but he doesn’t join together the two.

This is a shame, because the facts are troubling on both an instrumental and an aesthetic level. Each year, on or around Valentine’s Day, a vast number of bees are trucked into California’s Central Valley, awakened from hibernation and fed high-fructose corn syrup laced with antibiotics. Literally all the bees in America (and sometimes foreign bees, too, if there are not enough domestic ones) are let loose and asked to pollinate a vast 600,000-acre desert where everything except almond trees has been destroyed.

Migratory beekeepers drive their hives 28,000 miles each year to provide pollination around the country. Apart from the absurdity of driving around flying insects that have evolved to explore neighborhoods, this annual California gathering creates a vast bee bordello where viruses, parasites and bacteria can be nationally propagated.

Logical argumentation is not the point of this gorgeous illumination of a terrible threat to global food. Spare exposition joins portraits of a collection of delightfully accented and eccentric bee enthusiasts from around the world (Italy, France, Germany, Australia, New Zealand, England). The wonderful bee historian and yogi Yvon Achard, from Grenoble, France, admits — just before he brushes a row of adoring bees with his moustache — that he is “full in love” with a particular queen. Animated and photographed lovingly, there are wonderful sequences of bees swarming, as well as horrifying sequences of them undergoing artificial insemination, but it all ends up as an exquisite patchwork, an observation that leans toward activism.

Bees are what you see in them. Achard sees lovers; a young British beekeeper sees queens of England in the queens; migratory beekeepers see a form of pollinating livestock, and the staff at a home for autistic adults see them as the ultimate therapy. Gunther Hauk, a biodynamic beekeeper who, in his retirement, is creating a bee-and-nature preserve, is the voice of reason in this movie. But even he ends a reasonable and nutritional list of honey ingredients — “enzymes, nutrients, trace minerals” — with the nonsensical sounding “forces of the hexagonal.”

The film indulges its subjects as they anthropomorphize the wisdom of (Mother) nature and extol the importance of life forces and spirit. But when applied to bees, our anthropomorphism is partly aspirational, partly cautionary. The selflessness of bees in society, and our inability to match their ability to prioritize the collective over the individual, has been a matter of public complaint since, at least, Bernard Mandeville’s 1714 poem, “The Fable of The Bees.” And it is cautionary, because bees are — if you’ll pardon the metaphor — the canary in the coalmine. They share our food tastes, and they are a vital link in the animal and human food chain. Bee colony collapse disorder is a warning of human colony collapse disorder.

In the end — and even in the absence of proper argument — the simplicity of the subjects and the sheer beauty of the filming of nature (from the Bronx to Perth, Australia) remind us that there is much to love about honeybees and their kin. We learn early on in “Queen of the Sun” that honey was a royal foodstuff for the Egyptians. It was rare and delectable and lasted forever; the 2,000-year old honey found at the pyramids in the early 20th century was still edible. That’s why we eat honey at Rosh Hashanah: not just because it’s sweet, but also because it’s the ultimate celebration food — sweet caviar of the nobility.

But, for “Queen of the Sun,” it’s not the rhetoric but the portraits that win the day. Factory farming is unappealing whether it’s chickens in tiny cages or almonds in a vast orchard wasteland. If we turn our fields into sterile factories, we further threaten the ecosystems that nourish us. If you want your children and grandchildren to grow up in a land of milk and honey, make sure you safeguard your cows and bees.

“Queen of the Sun” is showing around the country and opens in Los Angeles on June 17.