A Tremor in the Research Force 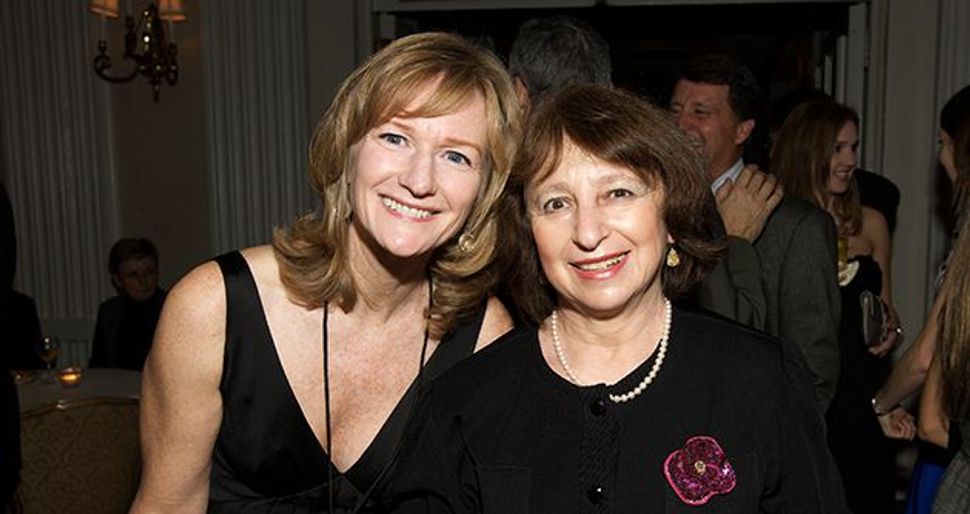 Fighting Parkinson?s: Eugenia Brin (right) was diagnosed with Parkinson?s in 1999. Five years later, researchers discovered the genetic cause of her disease: a mutation in the LRRK2 gene that is particularly common among Ashkenazi Jews. Here, she stands with Michael J. Fox Foundation co-founder Deborah Brooks. Image by ANN BILLINGSLEY

Genetics has long been thought to play a relatively minor role when it comes to the development of Parkinson’s disease. So it came as a surprise to the medical community five years ago when Dr. Susan Bressman and her colleagues at the Beth Israel Medical Center in New York reported that a single genetic mutation in a gene called LRRK2 accounted for a significant portion of all cases of Parkinson’s disease among Ashkenazi Jews.

“This was quite an amazing finding,” said Dr. Sharon Hassin-Baer, a neurologist at the Chaim Sheba Medical Center near Tel Aviv. “In Ashkenazi Jews, we find [the LRRK2 mutation] in about a quarter of the patients that have a family history.” By comparison, less than 2% of Parkinson’s patients in the general population harbor this genetic defect.

Since that initial discovery, researchers have traced the mutation back to the time of the Roman Empire, developed mouse models harboring the genetic defect and shown that Ashkenazi women with the neurodegenerative disorder are more likely than affected men to carry the mutation.

Yet just because someone has the LRRK2 mutation doesn’t mean they will get the disease. In fact, scientists estimate that only about a third of people with the genetic alteration will ever go on to develop symptoms of Parkinson’s in their lifetimes.

Why this is so remains a matter of scientific debate. In a study published late last year, Bressman and her colleagues studied five Jews, 70 to 95 years of age, who were carriers of the mutation but remained disease free. After close to five years of annual mental and physical examinations, only one woman developed the tremors, stiffness and speech impairment typical of Parkinson’s, whereas the rest appeared indistinguishable from their age mates.

“There are two ways to look at this,” said Bressman. “Either something is protecting these nice old ladies and they’re not getting Parkinson’s, or maybe some other deleterious thing has to happen to get Parkinson’s.”

To explore these distinctions, Bressman is now embarking on her most ambitious project to date. Together with researchers at Columbia University and Tel Aviv University, Bressman is intensively studying around 2,000 Jews with Parkinson’s, some 280 of whom carry the LRRK2 mutation, to determine the genetic and environmental factors that contribute to Parkinson’s development.

Meanwhile, Drs. Avi Orr-Urtreger and Nir Giladi, at the Tel Aviv Sourasky Medical Center, are working on another avenue of research related to the genetics of Parkinson’s development among Jewish patients. “I always tell people, genes are not only bad. In fact, we think the opposite,” said Orr-Urtreger, who will soon publish data chronicling beneficial DNA sequences that appear to help prevent Parkinson’s onset.

“Once the world of genetics is opened, you can get to the bottom of the disease, understand it better and develop new treatments,” he said. “We have high hopes that not that many years from now, we will be able to, if not prevent the disease, at least slow it down.”

Bressman’s and Orr-Urtreger’s projects are just two of many LRRK2-related initiatives funded by the Michael J. Fox Foundation for Parkinson’s Research, the New York-based philanthropy that recently received up to $50 million in matching funds from two prominent Ashkenazi Jewish supporters: Google co-founder Sergey Brin and his wife, Anne Wojcicki.

Brin tested positive for the LRRK2 mutation three years ago through Wojcicki’s genetic testing company, 23andMe. He remains symptom free, although his mother, Eugenia Brin, a mathematician and semi-retired research scientist at NASA’s Goddard Space Flight Center, was diagnosed with Parkinson’s in 1999. Although only one copy of the LRRK2 mutation is necessary to develop Parkinson’s, she has two copies, having inherited the gene from both her mother and her father.

“I do have symptoms, but they are sort of under control with the medication I take,” said Eugenia Brin, 62, in a lilting Russian accent.

Brin said she does have a bothersome involuntary facial grimace — a side effect of the dopamine-related drug she takes. But overall, the disease has not deterred her from having an active lifestyle: She hikes, takes yoga classes at the gym and enjoys skiing each winter.

Even with this activity, however, “I feel like I am not doing enough,” Brin said. To fill the gap, Brin joined the board of the Hebrew Immigration Aid Society, an organization that helped her family emigrate to the U.S. from the Soviet Union more than 30 years ago and to which her son also gave a large donation recently. She also serves on the patient council of the Fox Foundation, and she recently joined a group of women with Parkinson’s that meets once a month for lunch near her home in California’s Silicon Valley.

Brin also actively follows the Parkinson’s disease literature and says she is hopeful that a useful drug will emerge to target her particular mutation. Brian Fiske, director of research programs at the Fox Foundation, says there is reason for her optimism.

“The LRRK2 gene codes for a protein that is a type of enzyme that drug companies are actually very good at making drugs against,” said Fiske. “So when this genetic finding hit the newsstands, industry really took notice. They realized it was something they could target rather easily.”

Indeed, last year scientists from the Johns Hopkins University School of Medicine reported the first evidence that a compound targeting the LRRK2 mutation could prevent the loss of dopamine neurons in a living mouse. The findings, said Dr. Ted Dawson, professor of neurology and neuroscience at Hopkins, who led the study, “suggest that inhibitors of LRRK2 could be of benefit in patients with LRRK2 mutations.”

Meanwhile, some scientists are branching out beyond Parkinson’s to dissect LRRK2’s other evils. For example, Bressman’s team reported in November that Ashkenazi Jewish Parkinson’s patients with the LRRK2 mutation had a three-fold higher risk of cancer than those without the genetic defect.

The study, published in the journal Movement Disorders, considered just 31 New Yorkers with the LRRK2 mutation, but Hassin-Baer says she and colleagues have their own data that confirms the higher risk of cancer in a much larger cohort from Israel.

What’s more, in January investigators from the Van Andel Research Institute in Grand Rapids, Mich., found a potential explanation for these observations: They showed, in kidney and thyroid tumors, that LRRK2 helps fuel cancer growth and survival.

All this research should ultimately help with the quest for new drug options. “We know that in cancer research and therapy there is so much progress,” said Hassin-Baer. “So maybe this will open up new avenues.”

Fiske is confident it will. And once new drugs have been developed, physicians might be able to halt Parkinson’s progression even before symptoms start to develop, he noted.

“Now you have a group of genetically defined ‘at risk’ people who you can actually follow and say, ‘Do I see early signs of Parkinson’s disease in this group?’” Fiske said. “So when treatments become available you can maybe give them to these people to help slow the disease down. That is the real promise here.”

A Tremor in the Research Force