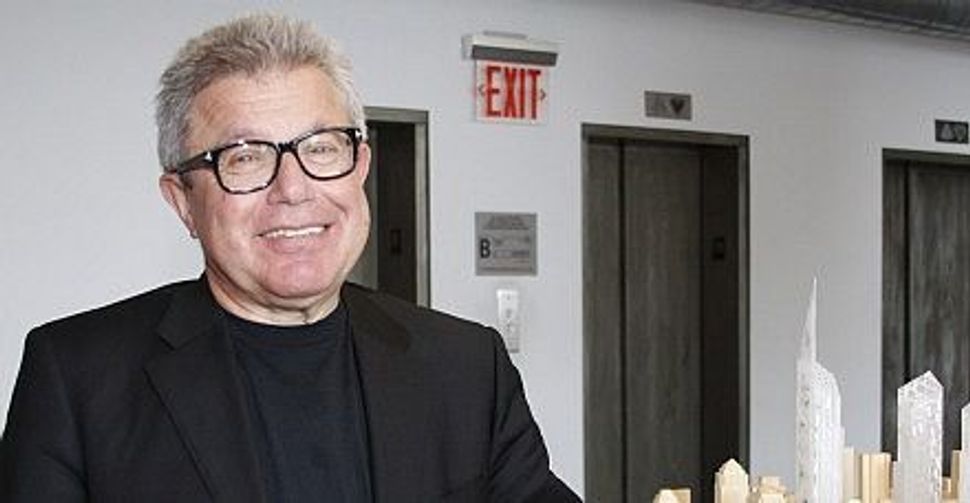 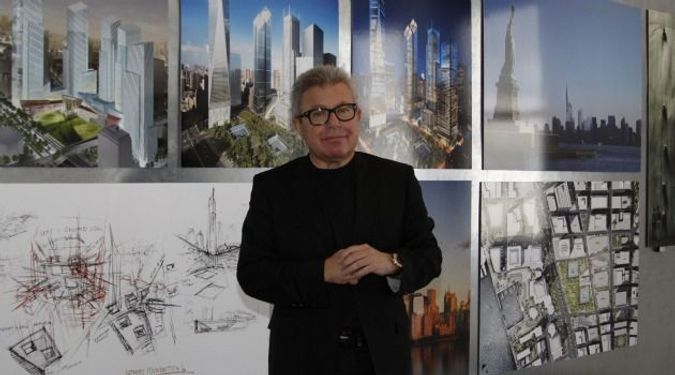 Sense of History: Daniel Libeskind says he never intended for his plans for the World Trade Center site to be implemented without changes. Image by Shulamit Seidler-Feller

Perhaps it’s for the best that an itinerant Yiddish storyteller did not design the new buildings on the World Trade Center site. But the grandson of one, Daniel Libeskind, is strongly channeling his grandfather as he oversees the implementation of his master plan for the site. 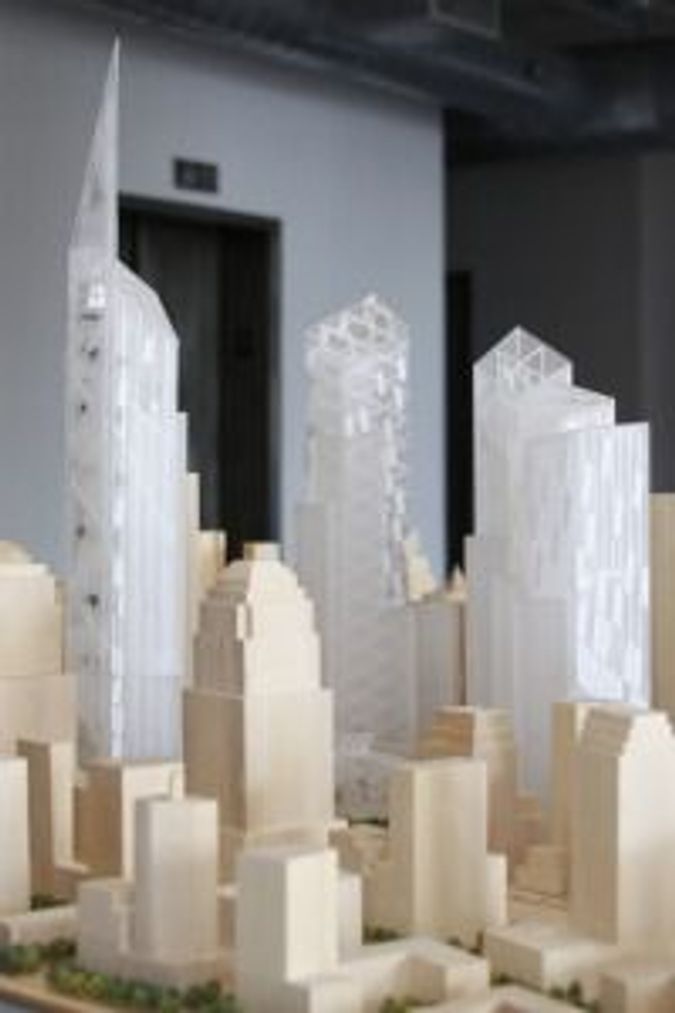 Model City: A decade after 9/11, Daniel Libeskind?s dream for a new Ground Zero is coming to life. Image by Shulamit Seidler-Feller

A diminutive but twinkling 65-year-old with wiry white hair and the unobtrusive chic of a fashion designer, Libeskind has an accent that still bears strong traces of his upbringing in Poland. He has the energy of a teenager with a message to get across: “Architecture is a form of communication. It communicates through space and buildings, but everything is a memory and everywhere there is a story.”

Sitting in the 19th floor office of Studio Daniel Libeskind, in Lower Manhattan, you might never realize that you are barely 1,000 horizontal feet from the construction site at ground zero. His projects are present in model or poster form — an ambitious project with architect Zaha Hadid in Milan, Dresden’s Military History Museum and, of course, the World Trade Center site — but there is a calm, a certainty and an enthusiasm for fascinating digressions, belying the imminent arrival on his doorstep of the 10th anniversary commemoration.

Despite being now on, “my fourth governor, fourth head of the Port Authority and almost on my second mayor,” his eagerness is undiminished. Indeed he claims that the ongoing attempts to balance all the claims of the stakeholders — architects, victims’ families, politicians and businessmen, among others — merely “proves the virtue of democracy.” An earlier disagreement with Michael Arad, the Israeli-born designer of the memorial portion of the site, has long since passed, and now the two are even talking about working together. Rather than bemoan bureaucracy, Libeskind delights in the fact that “division of labor gives way to unity of purpose.”

When I ask him whether the finished site will represent only 4% of his own plan, his words tumble out enthusiastically, one over the other. “I never wanted to be the architect of five skyscrapers, the museum, the memorial and the PATH station… I made a series of drawings to illustrate how the master plan could be filled in with many, many different hands. And what’s happening now is very close to what I drew.” Though the buildings are now in the hands of other architects, Libeskind feels that his main features are still there: from the emptiness at the base of the towers, to the centrality of a civic plaza, to the importance of a living neighborhood that requires commercial space to be distributed over five towers and not two.

Ten years after he watched the news from Berlin and stated in front of friends and family, “I’m moving to Lower Manhattan,” he’s there and overseeing the revitalization of life in the area.

And he’s explaining why and how he’s doing so — a spiel that he must have given countless times — with the freshness of a college student, but the insight of a professor.

For many years he was indeed a professor — an academic architect teaching at universities around the world. This is, after all, a man who didn’t build a project for the first 30 years of his career. And then, on the opening day of his first building, the Jewish Museum Berlin, Al Qaeda hijacked planes in American airspace and turned them into deadly missiles in New York, Pennsylvania and Virginia.

Libeskind’s personal and professional lives became even further entangled with history on that September day in 2001 because his daughter, Rachel, had just had her bat mitzvah, the first such ceremony at Berlin’s Oranienburg Synagogue since 1933. All the guests on planes to America were turned back around, and the Libeskinds ended up hosting 30 guests glued to the unfolding reality of the world back home.

Unlike the vast, impersonal World Trade Center that was being built in the late 1960s while Libeskind was a student at the relatively nearby Cooper Union, Libeskind approached his project by thinking first about the “human scale.” He envisioned the neighborhood as a whole and imagined how the site would affect people like his father, who had been a printer in a Hasidic shop on Lower Manhattan’s Stone Street. It was his connection to people and to Lower Manhattan that won him an overwhelmingly popular victory in the public vote for the design of the site.

The starting point for Libeskind’s inspiration is the Statue of Liberty, which he saw when he was an immigrant arriving in 1959. “It’s really something…. All your dreams are in that space.” Libeskind took the icon as a basis for his design. He notes that the ring of five buildings will draw attention to the open civic and memorial space in the middle — the eight of 16 acres that were deliberately left unbuilt — just as the crown on the top of the statue draws attention to her head.

The symbolism is dense. The museum will descend to the bedrock of the island and to the slurry wall, which acts as a vast underground dam against the Hudson River. Tower 1 will rise to 1,776 feet to echo America’s independence; Fulton and Greenwich streets will intersect to make the neighborhood bustle and Santiago Calatrava’s transit hub align with the public plaza — the so-called “Wedge of Light” — whose edges are defined each September 11 by the rays of the sun at 8:46 a.m., when the first tower was hit, and 10: 28 a.m., when the second tower collapsed.

Libeskind is an educator, a storyteller intent on building a place where people can find the narratives that will shape their own memories of what happened and how they should rebuild in the future. “It’s not didactic,” he insisted, “There’s a complexity in the story.”

And there is a deep, sympathetic humanity in his conception. Some artists can talk well about their work, but the products do not bear them out. Libeskind’s discussion about the importance of culture and of a vibrant neighborhood that is not bogged down by tragedy — “does not become a sad place” — is compelling. The model is designed not simply for captains of industry looking down from corner offices, but for real people struggling hard in New York City: workers, tourists and subway travelers. It’s about shaping the question of how do we live, hopefully and ambitiously, in Lower Manhattan, and about remembering the innocent victims who were doing those same things in 2001.

Dan Friedman is the Forward’s arts and culture editor