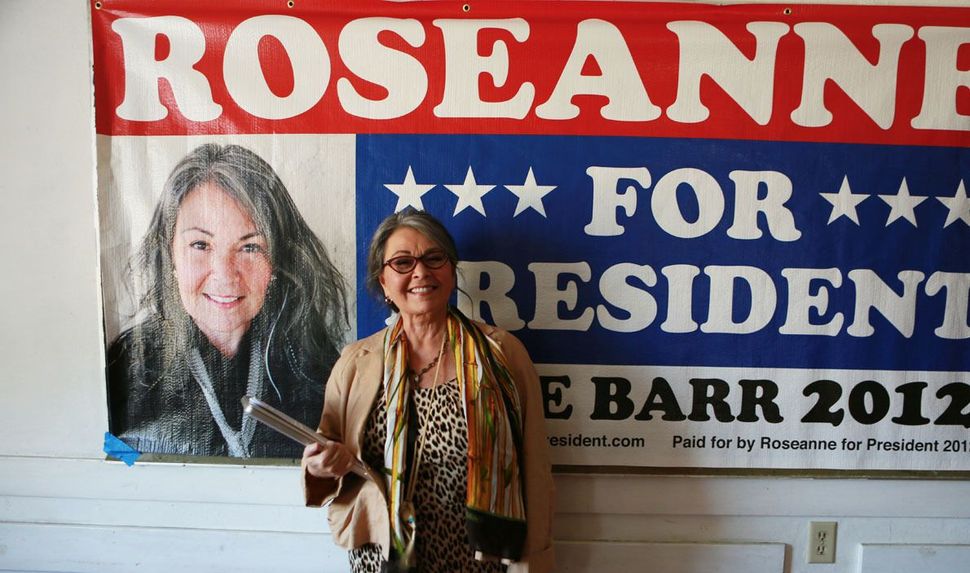 Roseanne Barr is on a mission. For anyone who has watched her on television over the past few decades it won’t come as a surprise that her mission involves empowering women, but it might be more surprising that twin prongs of strategy involve teaching Jewish women to meditate and running simultaneously for President of the United States and Prime Minister of Israel, on a two-for-one campaign. As a tangential part of that campaign, she and her sister Geraldine will be at the Isabella Freedman Jewish retreat center for a Jewish Women’s Weekend from September 23 to 25, running some programs during the introspective month of Elul. The Forward’s Dan Friedman spoke to Roseanne about kabbalah, politics and the soul of the Jewish people. 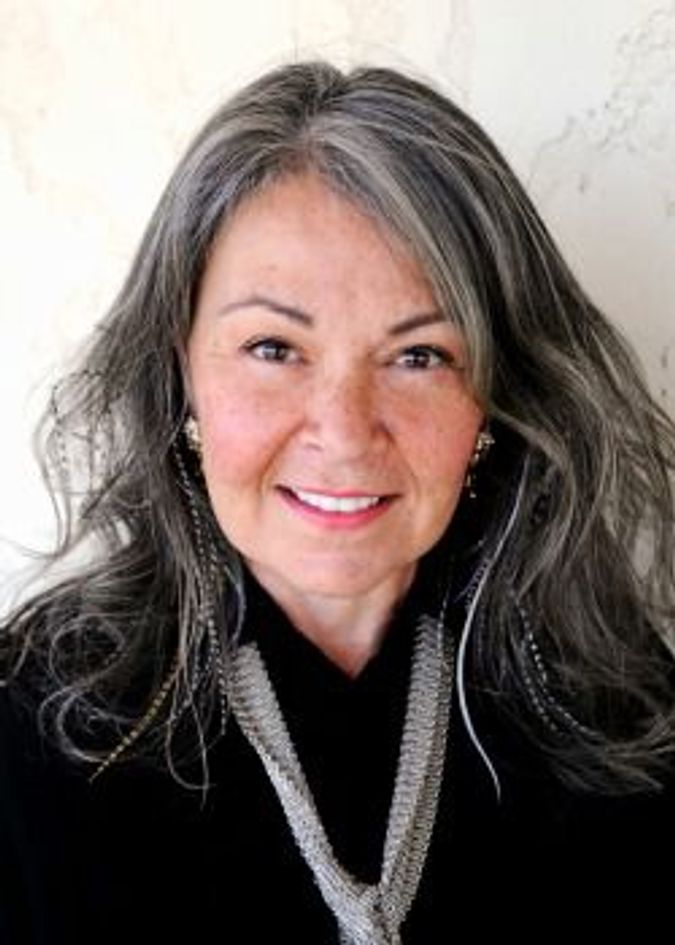 Our People Are Better?: Roseanne Barr says her vision of justice for women and the Palestinians grows out of her Jewish grandparents beliefs.

Dan Friedman: Why are you running for office in both America and Israel?
Roseanne Barr: There’s no way for those two countries to act independently. Quite bluntly I’m running to save them from corrupt males before they get the places blown up. As a Jew that’s what I owe my people, to save them with Tikkun Olam by bringing communities of women into politics and religion.

What about Hillary Clinton, Nancy Pelosi, Debbie Wasserman Schultz — are they not powerful women? They are just women who serve the patriarchy, who are as obsolete as the system they serve, what we need is a new system — a People-ist system based on need, not greed, that works through values, not money.

I think that you wrote you were a socialist growing up, are you still one? I’d just call myself a People-ist. The stock markets can be fixed to serve the needs of humanity. That’s the way it has to go. The markets can feed prosperity and happiness and community.

Are you just teaching women at Isabella Freedman? I don’t like to say “taught” meditation, it’s the wrong word for it, but… Over the last few years I’ve perfected teaching meditation to women. Jewish women are not ever taught it because the patriarchy likes to keep women powerless to do all the work without question. But it’s we who have to change the world. Jewish women can do that. It’s Tikkun Olam. I’m excited to spend a weekend with other Jewish women before Rosh Hashanah to repent before it. There’s a lot of work to do before the holidays to prepare your vessel to go deep and correct the things you recognize, the things you do and the things you intend. Meditation state is a place of deep relaxation where you can pinpoint the things you do and to set a paradigm switch from effect to cause. So how to be a cause in your own life.

How long have you been meditating? 17 years.

How did you get into it? I was introduced by friends. It’s something that I enjoy, and enjoy teaching or helping with.

It says in your bio that you are a self-defined Kabbalist, is that fair? Yes, well, I do kabbalistic meditation. It’s not unlike time travel, it can change the past and not just the future. You can look at what was lost and go beyond the grief of what was lost. We need to go beyond because that’s why they wanted to stop us before. I have my grandfather’s prayer book from the 1800s, and it blows my mind because it’s all about social justice. That’s where we were in Europe and that that’s why they stopped us. My grandparents were from Poland, Lithuania and what used to be Czechoslovakia and they were activists. They were saying the same thing that I’m saying now. I’m going to carry their banner because they were right — they are right — and that’s what Jews are meant to do. Social justice cannot be stopped or sidetracked.

You talk about society and the environment and the economy and personal health, are these all part of your platform? Yes, but the most important is mental health. You have to fix your mind through meditation. At Isabella Freedman I’ll do a Shabbat meditation, which will be very long and deep with layers and layers and layers. It will help women to be aware of what their world is and how it makes them feel. We are not our thoughts, we can direct our thoughts. It can help us as Jewish women to lift ourselves out of grief and to know what grief causes and what grief costs. Kabbalah and Buddhism both talk about individual and group karma and it’s important to know that after the grief of what has been done to our people and the grief of what has happened to us, it’s possible to heal and go on. And, of course, I put some jokes in there!

Do you regret dressing up as Hitler for Heeb? No, I dressed up to protest against Israel’s actions against Palestinians in Gaza. The cookies were Palestinian cookies. I won’t let the soul of the Jewish people be betrayed by right-wingers who do those things. In Hawaii the community is valued like it was in Israel at first with the kibbutzim and such. The community worked based on need. Israelis in the streets at the moment are saying the same things by the hundreds of thousands and we won’t be silenced by Bibi or others. Those are not our values. Our people are better than that.

Dan Friedman is the Forward’s Arts and Culture editor.