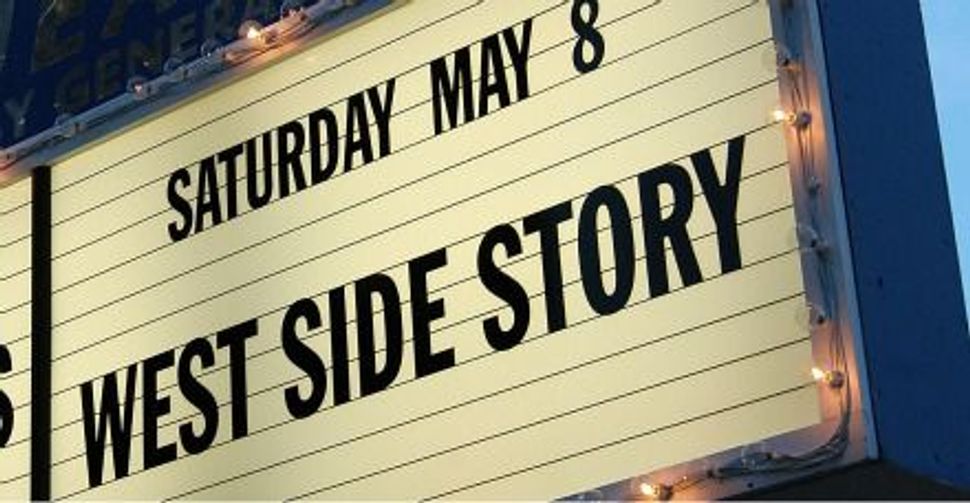 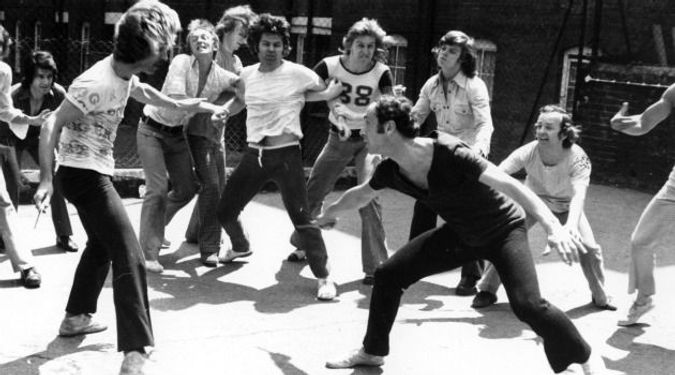 Shofar, So Good: Performers practice a knife fight in a scene from Leonard Bernstein?s ?West Side Story.? The shofar theme is woven throughout the score. Image by Getty Images

Why does it begin with a shofar call?

Once you compare the famous, startling first three notes of Leonard Bernstein’s “West Side Story” score with a real shofar sounding “Tekiah g’dolah,” as I did in 1996 to demonstrate this point on WNYC, the resemblance is undeniable. Once you notice it, this shofar theme is woven throughout the whole score — in the words of the composer, the “kernel” out of which the entire score grew. This was one of the shofar-inspired pieces I included in this newspaper in 2002 in my history and lore of the shofar.

“West Side Story” remains, after “The Sound of Music,” the most popular nonanimated musical film, famous throughout the world. To commemorate the 50th anniversary of the film, which won 10 Academy Awards, a newly digitally remastered version has been created, along with versions in which the instrumental soundtrack is stripped out so that only the vocal parts can be heard. This allows orchestras to perform Bernstein’s remarkable score live along with screenings of the film, as the New York Philharmonic did twice at the beginning of September, to wildly cheering, sold-out houses at Avery Fisher Hall. This was a homecoming of sorts, as “West Side Story” was filmed where Lincoln Center now stands.

A new book has also just been published, “Something’s Coming, Something Good: West Side Story and the American Imagination” (Applause Theater and Cinema Books) by Seattle Times theater critic Misha Berson. It’s a breathless enthusiast’s history of all aspects of the work and its impact (and controversies), drawing on, and adding to, the already considerable hagiography surrounding this beloved musical.

All four of the musical’s creators, Bernstein, Jerome Robbins, Arthur Laurents and Stephen Sondheim are Jewish, but that hardly explains using a shofar call. My own eureka moment was discovering that Robbins’s original idea for the musical was called “East Side Story,” a version of “Romeo and Juliet” about a Jewish girl and an Italian-Catholic boy on New York City’s Lower East Side at Passover/Easter. Practical, commercial and topical reasons drastically altered the show’s scenario and personnel, with the happy effect of allowing Bernstein to indulge his love of Latin rhythms and percussion. But even though the ethnic identities were changed, this specifically Jewish theme, dating from the original scenario, remained at the heart of the music.

Although Berson’s informative, well-researched book will certainly be a useful resource for anyone wanting to understand this work, her treatment of this three-note shofar theme usefully illuminates the book’s limitations. Almost in passing, she ambiguously acknowledges that an “influence on the score (subliminal or conscious), pointed out frequently by musicologists, is the Jewish liturgical music. Bernstein grew up as the son of Orthodox Russian Jews. The opening three notes of ‘The Prologue’ are particularly striking in this regard, given that these are the same tones blown on the ritual shofar….” This muddies the (subliminal or conscious) conceptual and musicological waters by lumping together tendencies, techniques and actual themes.

It also manages to denigrate the conscious awareness of this incredibly, even overly, perceptive composer. In a separate passage, she notes (quoting Bernstein) how important this theme is for the whole score. In a third, she misidentifies the interval of the first two notes as a tritone, whereas the tritone occurs between the second and third notes of the shofar theme (the first two pitches form a perfect fourth). In contrast, the first two notes of the song “Maria” do form a tritone, with the next note being the first note of the shofar theme transposed up an octave, before the theme curls back in on itself, toying with turning the tritone into a perfect fourth and then back to the tritone.

Berson accurately notes that medieval Christians regarded the tritone as “diabolus in musicus” (the devil in music). But again, she doesn’t connect the dots here. Even though the tritone makes up two-thirds of the main theme already identified with the shofar, this musico-theologicial observation of the tritone occurs as if in a vacuum. Moreover, since I’ve never been able to find any such reference, I’ve always assumed that I was the first to publish this association, and I was overjoyed when Bernstein’s lifelong friend and assistant, the late Jack Gottlieb, confirmed my conjecture. (Gottlieb also wrote about it subsequent to our conversation in his 2004 book, “Funny, It Doesn’t Sound Jewish: How Yiddish Songs and Synagogue Melodies Influenced Tin Pan Alley, Broadway, and Hollywood,” published by the Library of Congress.)

Berson is also similarly ambiguous about such critical issues as, for example, what Robbins did or did not contribute to the film after he was fired — with somewhere around half left to be filmed, including the opening sequence. Nevertheless, Berson’s book provides a welcome trove of information, like the dancers leaving a pile of ritually burned kneepads in front of Robbins’s door after he made them dance “Cool” over and over again on a concrete floor, one of many stories of this brilliant choreographer’s cruelty. Or Laurents saying at the outset of the collaboration, “I want to make one thing clear before we go any further, and that is I’m not going to write any f–king libretto for a goddamned Bernstein opera.”

In contrast, the stories about Bernstein are all like those of Carol Lawrence (the Maria on Broadway), who is quoted in the book: “He never lost his temper or his good manners. He didn’t drive us: he led us by believing in us. He is one the gentlest, most thoughtful men I have ever known, and we knocked ourselves out for him because we loved him.”

To Bernstein’s dismay, his “West Side Story” score was unquestionably his finest work when what he wanted most was to be known for his more “serious” symphonic and operatic compositions. “Serious” or not, to hear this superb score played live by the New York Philharmonic in top form was an unalloyed thrill, from beginning to end. Conductor David Newman, making his debut with the orchestra, brilliantly accomplished the impossible task of keeping the tempo to a specially created visual “click track” running on a small screen just in front of his score at the podium, to coordinate timing with the film. He managed this so precisely, the live music and soundtrack singing coalesced as a viable performance.

One can forgive Newman’s natural desire to want to slow down at the ends of songs, a tendency absent in the performance on film. Indeed, Berson points out in her book that tempos were even deliberately sped up in both the original film and in the original Broadway cast album to increase visceral impact. A newly revised orchestration of the film score was prepared for this anniversary, closer to the stage version, which Bernstein preferred to what he felt was the egregiously souped-up film orchestrations. The orchestra clearly had a ball playing this music. Particularly memorable was Wayne Bergeron, a sub, wailing away in the “Dance at the Gym” on high trumpet. The vitality of the New York Philharmonic performance of this section vied with even that of Venezuela’s El Sistema Simón Bolívar Youth Orchestra — which plays this number as its special encore, costumed with colorful national jackets and choreography that has the members tossing and twirling cellos in the air!

The digital transfer of the film, however, is awful. What had been vivid, deep colors in the Technicolor process are now wan and washed out. And the quality of the vocal soundtrack — while quite a technical achievement by Audionamix to have removed the instruments while preserving the voices — is unspeakable. It sounds as if it had been recorded over a bad telephone connection.

Still, whatever the flaws of this new version — and indeed there were many flaws in the original film — they matter little, as the momentum of what is good in this work is among the best of its kind on film. Even with their occasional awkwardnesses, the choreography, the plot, the camera work and, above all, especially when performed by the powerhouse New York Philharmonic, the music still retain a vitality that raised the roof, and they always will. The packed house rose to its feet in unison for sustained, enthusiastic, deserved applause.

Raphael Mostel is a composer based in New York City. His most recent recording, for the Royal Concertgebouw Orchestra Brass Ensemble with shofars, is available on the Innova label.