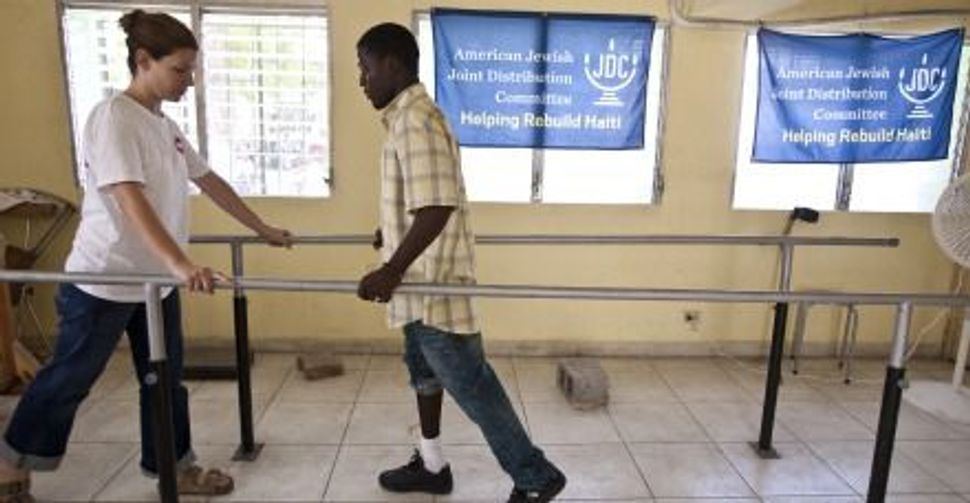 Image by Courtesy of JDC 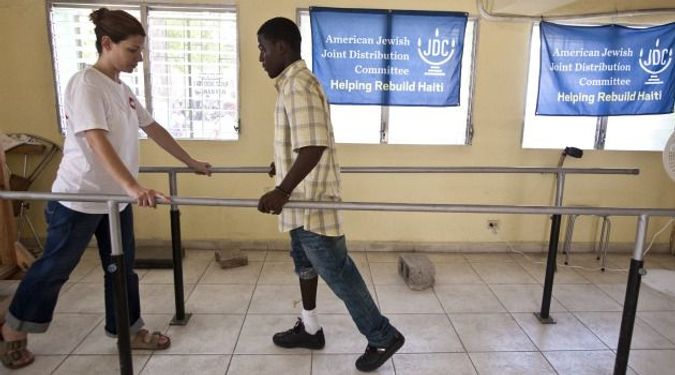 Back on Its Feet: Jewish groups are helping Haitians rebuild their lives after the devastating earthquake. Image by Courtesy of JDC

At the age of 23, Oscar, a college student in Port-au-Prince, Haiti, was looking forward to a professional soccer career. Then came the January 2010 earthquake that changed his life. The campus building he was in collapsed — most of his friends were buried under the rubble — and Oscar, who asked to be identified only by his first name, lost his leg and his dream of ever playing pro soccer.

Oscar has since become the poster child for Jewish efforts to assist Haiti’s recovery effort. He received treatment at a prosthetic and rehabilitation clinic set up by the American Jewish Joint Distribution Committee (JDC) and is now trying to get his life back in order.

“He told me that he knew who we were and why we were there,” said Gideon Herscher, JDC’s director of international relations, who was on the ground in Haiti immediately after the quake. “He said that no one in the world ever helped the Jewish people, but now you are here helping us,” Herscher recalled, adding that “Oscar made the link between our narrative and Haiti’s narrative.” 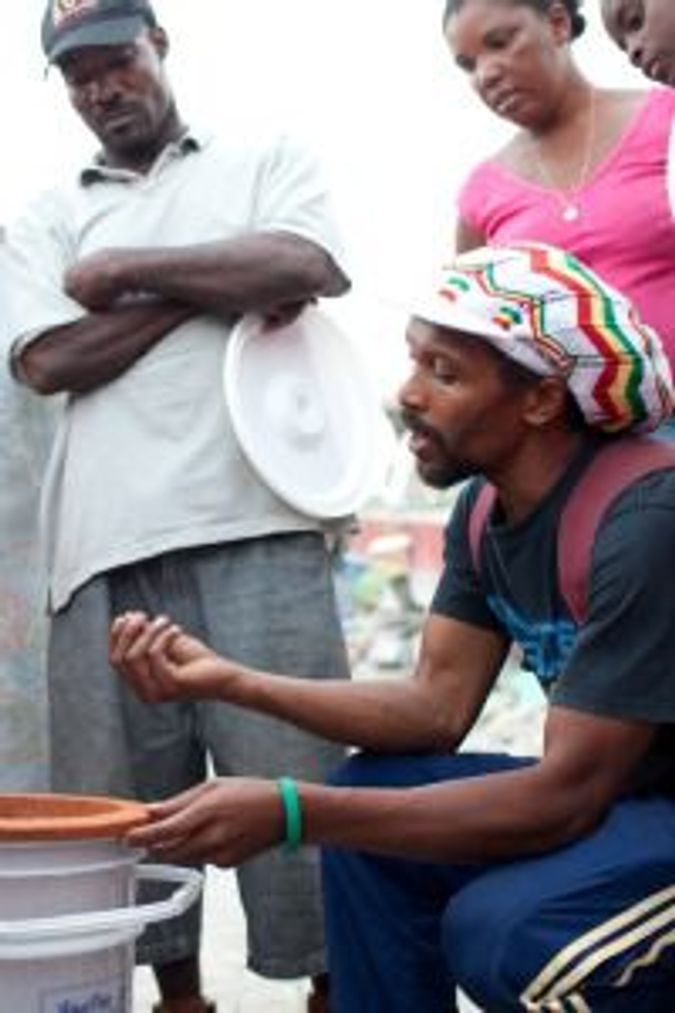 Each One Teach One: After relief work is done, groups seek to build capacity among local groups to help create long-term prosperity. Image by American Jewish World Service

While Oscar’s story provides a glimpse of hope, nearly two years after the disaster there is still very little reason for optimism in Haiti. According to government figures, the quake claimed 316,000 lives and destroyed 1 million homes. Today, nearly 600,000 Haitians still live in tent cities, contagious diseases continue to be a major concern, violence against women is on the rise and the local government is barely functional.

For Jewish organizations active in Haiti, assistance to the struggling nation has undergone a shift. From initial emergency aid — which included medical relief, shelter and food — the focus is now on long-term aid, re-building the society and setting up permanent institutions, such as the clinic in which Oscar was treated.

“What happens many times is that a lot of money is poured [in] right away, but no one deals with the bigger problems of how people will get out of the tent camps and how will they become independent,” said Ruth Messinger, president of the American Jewish World Service (AJWS), the other Jewish organization still deeply involved in Haiti. “We knew that it would not be responsible to spend a lot of money on short-term relief if there is not enough for the long term,” she said.

News of the devastating earthquake in Haiti led to a massive show of support from the Jewish community. Emergency campaigns launched by most Jewish organizations were well received by the community and raised a total of approximately $20 million. Bolstering the impact of Jewish aid to Haiti was the quick deployment of an Israeli field hospital — the first to serve the needs of injured residents in Port-au-Prince.

But most of the dozen or so Jewish organizations — including the American Jewish Committee, B’nai B’rith International, Mazon, Union for Reform Judaism and United Synagogue of Conservative Judaism — who were there to provide immediate short-term relief have since left, leaving the JDC and AJWS with the task of long-term reconstruction. Both organizations are now focused on making sure Haitians emerge stronger from the crisis and with more capacities to sustain the economy of a country that, even before the earthquake, was the poorest nation in the Western Hemisphere.

The JDC collected, directly and through The Jewish Federations of North America, $8.5 million in the months following the earthquake. Of that money, 82% has already been allocated. Nearly two-thirds of JDC-funded projects have already been completed, including the first-response emergency funding. The rest is dedicated to ongoing projects that require the group’s involvement on the ground for at least another year and a half.

One of the main JDC projects was the prosthetic and rehabilitation clinic, which utilized Israeli expertise and trained local medical practitioners to continue treatment after international help is gone. JDC also built a permanent school that serves children still living in tent cities and also provides wider community services. JDC has experience in rebuilding educational institutions in disaster areas dating back to the mid-1980s, and has built schools in Turkey after an earlier earthquake, in post-war Kosovo, and in Sri Lanka after the tsunami. Another program now under way, the installation of a bakery at an orphanage, aims to assist disabled orphans by giving them income and professional training.

JDC’s work, said Judy Amit, chief operating officer, has touched 250,000 Haitians, but there is still much more to be done. “I think Haiti is the most difficult of all the disaster areas I’ve seen,” said Amit, who recently returned from a visit to the county.

The American Jewish World Service started its work with a budget of $6.5 million raised from Jewish American donors. The group has been working in Haiti since 1999, with a focus on rural areas.

AJWS divided its post-earthquake work into three phases, the first dealing with immediate response and the others centered on long-term help. The issues being treated are food independence, sexual health and civil and political participation. These might not seem directly linked to the 2010 disaster, but activists say that the earthquake intensified problems. One issue highlighted by the events was the need to help de-centralize the country and support areas outside of Port-au-Prince. “We feel that it all has to do with the earthquake because so many people lived in Port-au-Prince and now have to find ways to sustain themselves outside the city,” said Amarilys Estrella, AJWS program officer for Haiti and the Dominican Republic.

Neither group continues to fundraise specifically for Haiti; both are functioning primarily on the funds raised in the weeks after the quake.

Yet AJWS expects to continue its operations in Haiti for several years and, like other Jewish charities, is focusing on building partnerships with local NGOs that can keep the work going for years to come.

“We are very little way down the road,” said Messinger. “There is still a long way to go.”