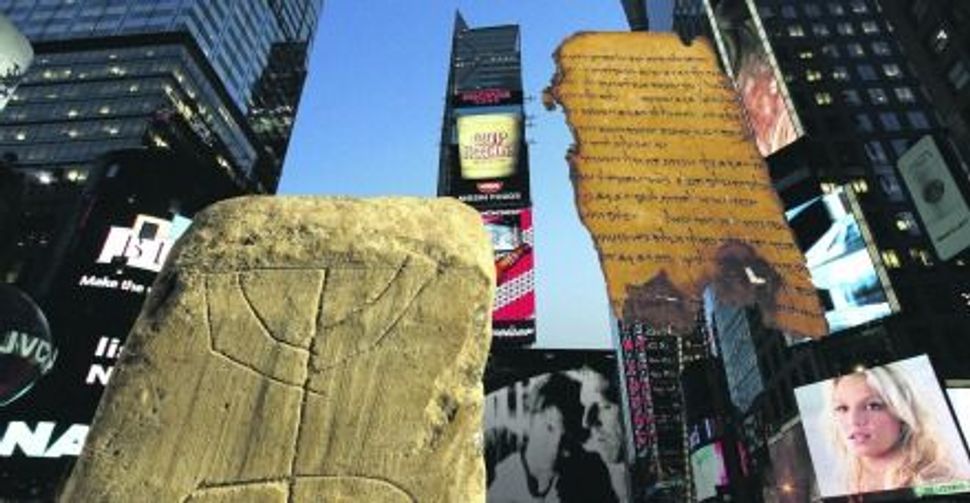 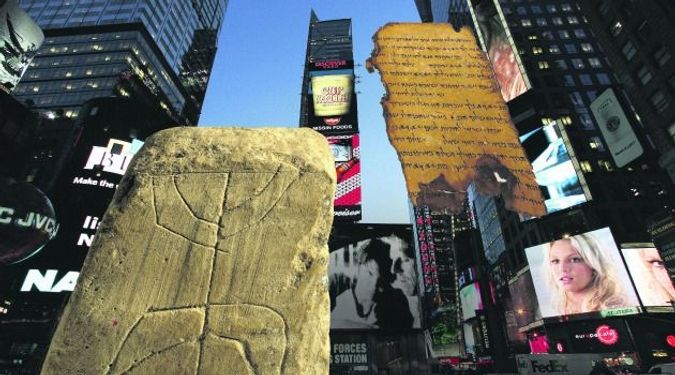 History in the Big City: A fragment of a scroll and a recently discovered stone with scratched decorations are on exhibit at Discovery Times Square. Image by forward illustration

“Dead Sea Scrolls: Life and Faith in Biblical Times,” which opened on October 30 at the cavernous Discovery Times Square exhibit space in New York, touts itself as showcasing “the largest and most comprehensive collection of Holy Land artifacts ever organized.” Indeed, a more accurate title for this Bible-themed behemoth of a show, produced in partnership with the Israel Antiquities Authority, might be “Dead Sea Scrolls: The Collected Works.”

While the exhibit’s ambition — to contextualize the creation of the Dead Sea Scrolls, and to frame their effects on religion, borders and history — is spectacular, the sheer volume of notable relics ends up diminishing the show’s impact. Among the more than 500 objects, many on display for the first time, are pottery, coins, seals, jewelry, carvings, textiles and 2,000-year-old olive pits dug up in the deserts surrounding Qumran, where the scrolls were first discovered.

Focusing on objects rather than on texts is what sets apart Discovery’s exhibit from other recent shows about the infamous scrolls, including 2009’s more logocentric “Words That Changed the World” at Toronto’s Royal Ontario Museum. “We want to give people an understanding of the history of Israel through this exhibit,” said Debora Ben-Ami, curator of the Iron Age period at the National Treasures Department of the Israel Antiquities Authority, a presenting partner of the exhibit. “In these artifacts, we can hear the voice of the people in our past, not just the priests and kings whose voices you hear in the Bible. Archaeology is about common people’s lives, and it allows us to tell the complete story of the scrolls.”

The exhibit opens in a darkened room where white text painted on black walls relays a passage from Genesis: “The Lord said to Abram, ‘Go forth from your native land and from your father’s house to the land that I will show you.” A rumbling sound (God at work?) accompanies a female cantorial recitation of the passage. Doors swing open, and batches of ticket-holders are herded into a gallery where six giant video screens loop footage of archaeological digs in Israel and animated historical maps of the land. Standing in person over a display of three huge clay jars, a bearded young guide — noted in the script as a “rugged archaeologist,” but telegraphing Banana Republic — solemnly offers a welcome “to Israel — the biblical Land of Milk and Honey, at the crossroads of Africa, Asia and Europe.”

Led into a third room, exhibit-goers enter a gallery where dates projected onto the floor provide a concrete representation of a journey back in time. Each date corresponds to a group of artifacts, from an iPad representing 2011 to ancient pottery representing 1200 BCE. “The material culture here gives us context for each period,” Ben-Ami said. “The idea is that history is a process. The development of a faith is a process.” The newest artifact in the gallery was discovered in September, according to Ben-Ami. It is a stone from the first-century BCE bearing the scratchy image of a five-branched menorah.

The scrolls themselves get an oddly underwhelming treatment inside a huge circular display case in a fourth, lower-level gallery. A total of 20 scrolls will go on display during the run of the show, according to a press release; four of them will enjoy their world premiere at Discovery. Surrounded by even more artifacts — a mammoth piece of the Western Wall, desiccated fiber rescued from the area around Qumran, those olive pits — the shreds of ancient scripture feel almost secondary. Maybe that’s part of the point: While the scrolls here are depicted as the end of a long historical dialogue and the beginning of global and theological transformations, their own content and provenance make up just a slice of the story.

Despite the controversy that dogged the 2009 Toronto scrolls show, Discovery Times Square’s exhibit makes no mention of the furor that continues to surround the artifacts as they travel the world. In the weeks leading up to the Toronto opening, Muslim activists had lobbied to shut down the exhibit, claiming that the scrolls were “stolen” and illegally obtained when Israel annexed East Jerusalem in 1967.

Ben-Ami bristled at a question about the controversy. “We’re talking about culture, material culture, archaeology and 3,000 years of history in Israel,” she said. “Political questions did not come up.” San Diego State University’s Risa Levitt-Kohn, who shared curatorial duties with Ben-Ami, was also a curator of the Toronto show; at the time, she likewise punted the political question in an interview with the Forward, saying: “I’m an ancient historian. I can tell you about the past.”

Overall, “Dead Sea Scrolls: Life and Faith in Biblical Times” maintains a reverential tone of historical importance while working hard to ensure that its explanatory texts don’t demand too much of the Times Square crowd. The solemn air evaporates at the gallery’s exit; the inevitable gift shop includes Ahava skin-care products from Israel and made-in-India stuffed camels (large, $120), and, as gallery patrons exit “Scrolls” — after digesting three millennia of human history — they are faced with the latest addition to Discovery Times Square’s basement, the Cake Boss Cafe. What would an archaeologist think?