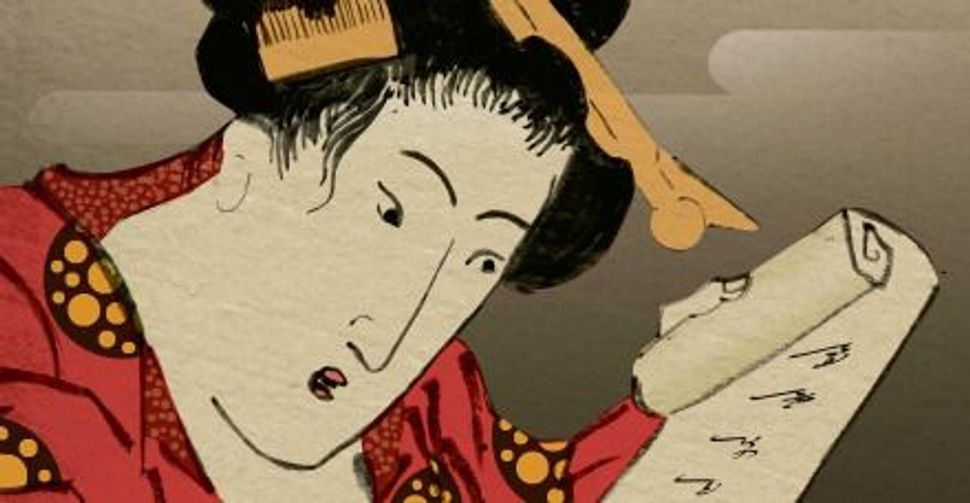 Rabbi Marvin Tokayer of Great Neck, N.Y., knows from Japan. “In 1969, I was living in Tokyo and I got a telephone call at my house from a guy who was Japanese who was ‘fumfing’ a little bit,” recalled Tokayer, the author of 20 books in Japanese (including the best-selling “Wisdom of the Talmud”) and Japan’s only rabbi at the time. “Either he was mumbling or stuttering or talking Japanese over my head…. He was calling from a pay phone in the street, so you heard the cars, and I didn’t know what the hell he was talking about. So I said to him: ‘What languages do you speak? What languages do you know?’ So he says, ‘Japanese, German, a little English and Yiddish.’ I said, “Yidish, kenst redn yidish? [Yiddish? You can speak Yiddish?]’ He says, ‘Yo [Yes]’ and I said, ‘Kum aher, come over right now. I want to see you.’” 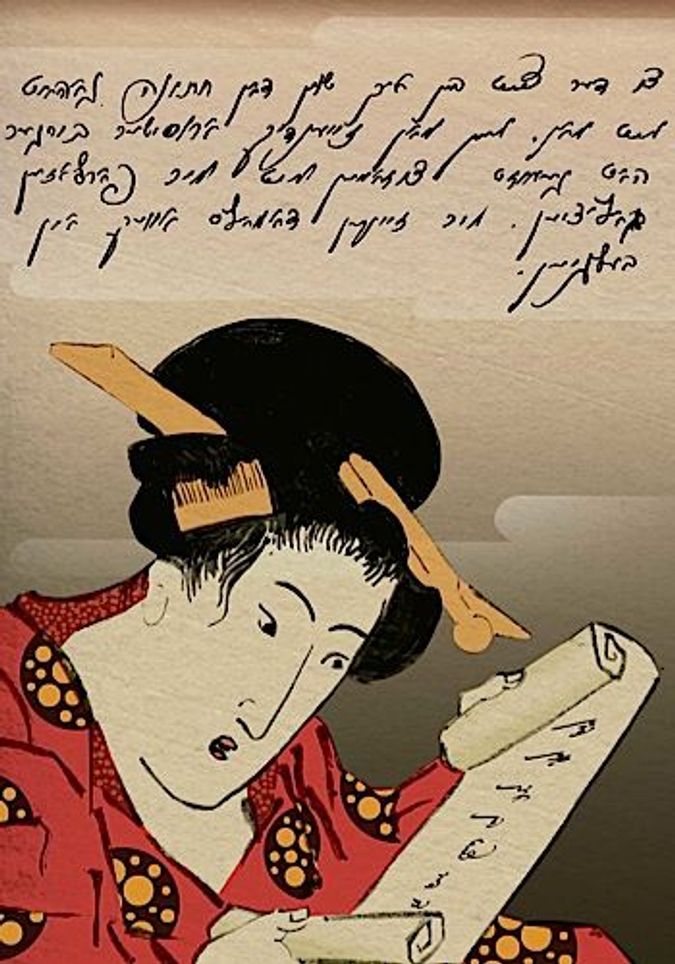 Ghetto to Ginza: A new Yiddish-Japanese dictionary is a formidable tome. Image by kurt hoffman

The young man was Kazuo Ueda (pronounced way-da), a University of Tokyo graduate student who, according to Tokayer, had taught himself a “very respectable” Yiddish. A stray reference to Kafka’s obsession with Yiddish theater — in a lecture by a Japanese expert on German-Jewish intellectual history — prompted Ueda’s initial interest. (“Ladies and gentlemen, you understand Yiddish much better than you imagine,” Kafka famously told a Prague audience in 1912.) Soon Ueda was gently hounding Tokayer with vocabulary questions and consuming tapes of the rabbi singing Yiddish lullabies. Ueda even lived for a while in Mea Shearim, Jerusalem’s Yiddish-speaking Haredi neighborhood.

Now a professor in the department of German at Fukuoka University (in the south of Japan), Ueda is the compiler and editor of an implausible opus: the world’s first Yiddish-Japanese dictionary. Its publication, in 2010, crowned decades of work, including a book about Yiddish grammar, a bilingual glossary, a cultural introduction to the language and a chrestomathy (a set of model texts). For those keeping score at home, the unidirectional Yidish-Yapanish Verterbukh clocks in at more than 28,000 entries, just beating out Uriel Weinreich’s classic “Modern English-Yiddish / Yiddish-English Dictionary” and falling only 9,000 entries short of Yitskhok Niborski’s gold-standard 2002 Dictionnaire Yiddish-Français.” But numbers miss the point — the Yidish-Yapanish Verterbukh is serious but accessible lexicography mit ale pitshevkes, or with all the trimmings: in Tokayer’s words, “a lifetime work.”

“To understand the rich heritage of Ashkenazic Jewry,” Ueda writes in the foreword, “the study of this language is vital not only for Jews, but also for non-Jews.” Among the dictionary’s virtues are entries based on Weinreich and rendered in the standard orthography of the YIVO Institute for Jewish Research; apposite example sentences, primarily from the legendary Moscow literary journal Sovietish Heymland (Yiddish for “Soviet homeland”); user-friendly transliteration, YIVO-style, for every entry, and special marking of all Germanisms, Slavisms and Hebraisms. Its cardinal vice is a price tag of 60,000 yen (nearly $770 at the current exchange rate) — not exactly a vilde metsie, or a great bargain, even in one of the world’s most expensive countries. “I have only good things to say about this dictionary,” said Tsvi Sadan (Tsuguya Sasaki), a Japan-born Yiddishist who has been using the dictionary regularly, “but it has one practical ‘problem’: It’s too expensive!” “I’ll buy it used,” Tokayer added. Editing the Yidish-Yapanish Verterbukh was an intricate, polyglot process. Assisting Ueda were Ber Kotlerman, native of Birobidzhan (in the Russian Far East) and Yiddish scholar at Bar-Ilan University, and Holger Nath, who has taught Yiddish at Michigan, Trier and Dusseldorf universities.

“I had oversight for several thousand words, including some which are not found in contemporary dictionaries, especially Slavisms, but also others,” Kotlerman wrote to the Forward in an email (in Yiddish). “Holger Nath mainly took care of Germanisms. For the project. Ueda also brought in assistants in Japan who know Russian and English. I would send my explanations in those two languages, and they would seek out an appropriate gloss in Japanese. This is particularly important when it comes to prefixes, since Russian furnishes more precise equivalents [for the Yiddish].” Japanese grammar, on the other hand, makes meaning and uses prefixes very differently, when it uses them at all.

The tradition of making Yiddish dictionaries stretches back to at least 1542, when Venice-based polymath Elia Levita, who is best known as the author of the popular Yiddish chivalric romance “Bovo-Bukh,” the original bobe-mayse, and is an improbable ancestor of British Prime Minister David Cameron, compiled a Yiddish-Hebrew-Latin-German dictionary — half a century before the first dictionaries of English began to appear. Today, the YIVO archives contain more than 100 different Yiddish dictionaries of every description, including comprehensive bilingual dictionaries in Belorussian, Dutch, English, French, German, Hebrew (both biblical and modern), Lithuanian, Polish, Russian, Spanish and Ukrainian. Ueda’s dictionary marks a significant milestone: the first time that the full wealth of the Yiddish lexicon has been made accessible in a non-European language (Hebrew aside). The challenges of translation here must have been particularly intense, not least because Yiddish is sweet on diminutives while Japanese thrills with honorifics. Many juicy idioms and interjections, such as oy and feh, apparently defied the lexicographers and fell by the wayside.

Ueda’s target readership is small but dedicated, and while Ueda may be Japan’s leading Yiddishist, he is not alone. Yoshiji Hirose, an expert on Yiddish literature at Japan’s Notre Dame Seishin University, honed his Yiddish in Brooklyn’s Boro Park; Chitoshi Hinoue is an art historian specializing in the work of Marc Chagall and is also a klezmer clarinetist; Sadan, who immigrated to Israel for a full-time position in Hebrew linguistics at Bar-Ilan University, is equally at home in Yiddish, Hebrew, Japanese, English and Esperanto.

Sadan pegs the number of Japanese proficient in Yiddish at fewer than 20, though more have partial knowledge of the language. All, he says, are driven by “healthy intellectual curiosity and interest in traditional Ashkenazic culture, which, unlike modern Israeli culture, seems to have much in common with traditional Japanese culture.” Zackary Sholem Berger, an American Yiddishist who has spent time in Japan, notes that many Japanese Yiddishists are also believing Christians. Several Japanese universities (Tokyo, Fukuoka and Sapporo, among others) offer Yiddish classes, and four Yiddish study groups now exist (in Tokyo, Kyoto, Kobe and Okayama). Regularly there are a handful of Japanese participants at Yiddish language immersion programs, klezfests and Yiddish conferences around the world.

Yiddish first came to Japan in the early 20th century, when a trickle of Russian Jews, most of them from Siberia, settled in the port cities of Yokohama, Nagasaki and Kobe. After World War I, Yiddish theater superstar Aaron Lebedeff took Japan by storm on an East Asian tour (a long-forgotten Yiddish operetta, “Mendl in Japan,” appears to have resulted). Two decades later, eminent Yiddishists and Bundists, as well as students and teachers of the famous Mir Yeshiva, were among the several thousand refugees saved by Japanese consul Chiune Sugihara. Most passed through Kobe en route to America, Palestine, the international settlements in Shanghai and other havens.

“Amongst each other we all spoke Yiddish,” said longtime Forward columnist Masha Leon, one such refugee, who spent time as a child in Kobe. “The only contact you had with the Japanese was on an official level…. We were gaijin, we were goyim!” Given the “constant churning” of refugees coming and going, Yiddishkeit never took root. Tokayer later formed a Yiddish vinkl, or club, for Tokyo’s Jewish community, along with a Sugihara refugee who remained: Joseph (Yosl) Shimkin, a one-time activist with YIVO and the Jewish Joint Distribution Committee, who was laid to rest, his tombstone in Yiddish, at the Yokohama cemetery. The 1990s saw the creation of the short-lived Yapanisher Yidish Klub (Japanese Yiddish club) led by expats but well attended by Japanese enthusiasts, and even the publication of Der Yapanisher Yid (Yiddish for “the Japanese Jew”), an occasional newsletter (now defunct), that was edited by Sadan and by expat lexicographer Jack Halpern.

As Hirose points out in his essay, “The Contrast in the Reception of Isaac Singer: Between Japanese and Yiddishists,” what enchants Japanese Yiddishists about Singer’s stories (and about one of the successful musicals in Japanese history, “Yane No Ue No Baiorin-hiki,” aka “Fiddler on the Roof”) is an almost transcendent quality — the distant aura of a language “flying from the earth as high as Chagall’s lovers in the sky over shtetls.”

Ross Perlin was the Forverts’s China correspondent. His most recent book is “Intern Nation: How to Earn Nothing and Learn Little in the Brave New Economy” (Verso, 2011). His next book will hopefully be a dictionary.