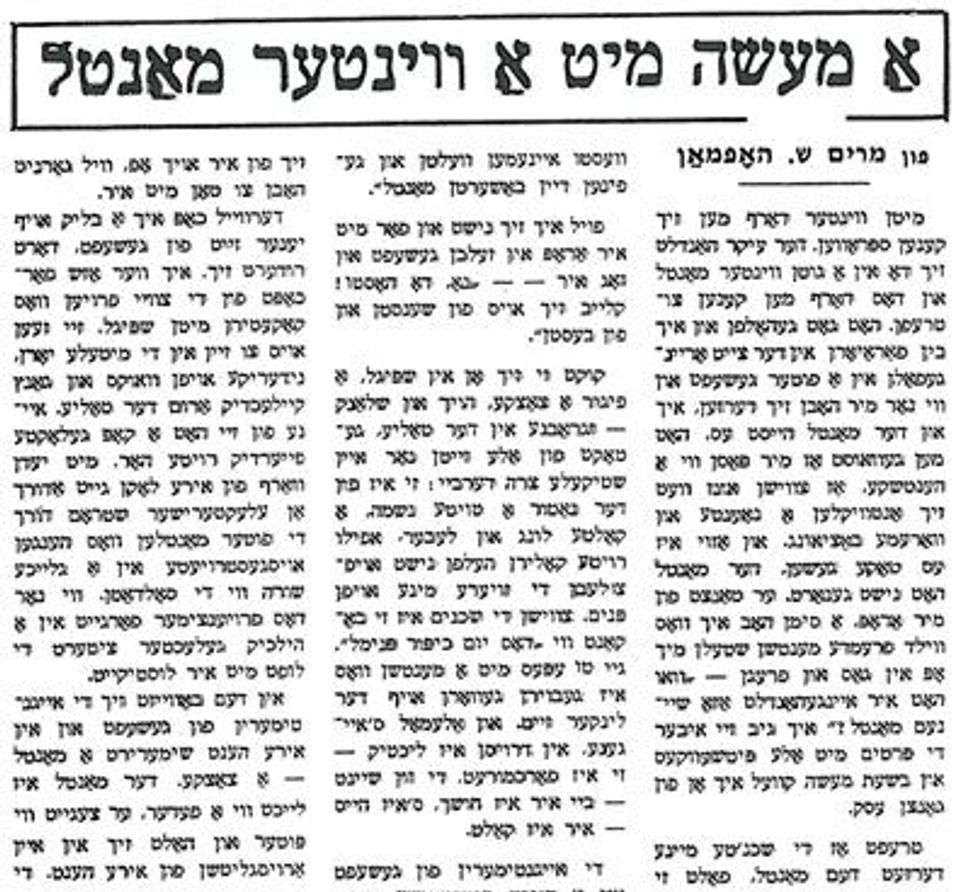 Translated by Miriam Hoffman and Beverly Koenigsberg
This story originally appeared in the Forverts of February 20, 1987.

And so it was! The coat hadn’t deceived me. It did a virtual dance around me when I wore it. I knew this for a fact because perfect strangers would stop me in the street and ask, “Wherever did you discover such a gorgeous coat?”

I would tell them the story, adding a few colorful details, and in general I was totally thrilled with the whole situation.

It happened that one day I met a neighbor of mine, who, when she saw the coat, fell into a fit of ecstasy. She had to have just such a coat, or the world would come to an end.

“Where did you manage to find such a beautiful coat?” she continued to harangue me. Finally I told her the story of our initial meeting, which might be described in a romantic novel as love at first sight.

“The moment we saw each other,” I recounted, “there was a throbbing in my chest, and the two of us swore eternal love.”

To cheer her up, I promised my neighbor I would take her to the fur shop. “With your figure,” I added, “you will conquer the world, and you are certain to find the coat for which you were fated.

We didn’t procrastinate, and post-haste I drove with her to the same shop. “This is it,” I said. “You can choose a coat here from the most beautiful and the best.”

She looked at herself in the mirror: a knockout figure, tall and graceful, narrow in the waist — quite sexy into the bargain. She did, however, suffer from one tiny, but fatal, flaw: She was a dead soul, a cold fish! Even bright red blush failed to brighten the sour expression on her face. Among the neighbors she was known as “Yom-Kippur Punim,” that is, “Atonement-Day Face.” What can you do with a person who was born on the left side? It was always the same: If the day was bright, she was under a cloud; if the sun was shining, she stumbled around in the dark; if everyone complained of the heat, she shivered from the cold.

The owner of the shop was a tall, genial lady. She welcomed us heartily, and although she was busy with two other customers, she devoted herself to my neighbor and kept displaying coats for her approval. My neighbor, with great energy, took to assessing the coats — put one on, took one off. One coat was lovelier than the next. I quietly watched her silent struggle as she considered each garment. The poor thing simply had no inkling of why all the coats were wrong for her. She was unaware that the minute she put on a coat she would instantly throw it a glance of malignant disapproval, and the coat itself would begin to shake itself loose from her grasp.

In the meantime, I sneaked a glance at the other side of the dressing room and noticed that there was quite a hubbub. At its center I was fascinated to see two women who were carrying on coquettishly in front of the mirror.

They appeared to be middle aged, rather short of stature and quite ample around the waist. One of them had a head of flaming red hair. With every toss of her mane, an electric current would pass through the fur coats, which were lined up like soldiers in formation. Every once in a while, the fitting room filled with a burst of hearty laughter, and the very air crackled with the electricity sparked by her exuberant cheerfulness.

At this moment, the shop owner appeared, carrying in her hands a truly fabulous coat, a one-in-a-million jewel. The coat was as light as a feather and as smooth as butter. Indeed, it kept slipping out of her hands. The lively redhead grabbed it for herself and threw it over her shoulders, and immediately the coat came to life. Her red hair brought out the gold color in the fur, and with her every move, with every turn of her limbs, the coat danced and rejoiced.

“It’s a fox,” the owner tossed out her reply with evident pride.

The fox was radiant with lively colors, bright gold interlaced with black-golden streaks. The red-haired lady slid smoothly around in the coat, her every move an act of seduction.

She coquettishly stretched out her hands to the mirror, sprang around the room with smart dance steps and carried on her steady flirtation with the fox.

“Ah, this coat! This is me,” she rhapsodized.

My neighbor stood there as though she had been physically assaulted. Then she confronted the store owner, who hadn’t stopped circling the fiery redhead, and stormed,

“I want to know one thing. Why didn’t you show me that fabulous coat first?”

The owner tore the coat off the red-haired woman and draped it around Yom-Kippur Face.

What can I tell you? In that very instant, the fox started to struggle for its life. The poor thing hung about her, colorless and faded, completely exhausted, hardly able to draw a breath. And in the end, its head thrown to the side, it heaved its final gasp.

I would not have believed that such a thing could happen. Just a minute earlier the fox was prancing around with great happiness and joie de vivre, standing firm, ready to conquer worlds. And suddenly, with no warning, it was overcome by complete and utter prostration.

My neighbor, a furious expression on her face, shook the dead animal from her shoulders and handed the slithering fox to the red-haired woman. That one grabbed it with both hands, pressed it to her breast with abandon and caressed the fox seductively, whispering all the while.

And the fox instantly came to life!

The woman beamed at her reflection in the mirror, struck out a sexy little leg from under the coat, giggled, and naughtily displayed all her feminine charms. And we, well, we stood transfixed as though under a magic spell. You would think that we had been looking at the same coat all along, but it wasn’t so! The coat changed altogether, depending completely on the nature and temperament of the woman who wore it.

Naturally, you want to know how this whole incident concluded. What can I tell you? My neighbor’s moment of joy quickly evaporated. On the way home she swore to me that she would never again consider buying a fur coat because she “slaughtered them without a knife.” So I attempted to comfort her and suggested that she should begin first with a fox collar. Next she could graduate to a fox jacket. In this manner she would allow the animal to accustom itself to her, one small step at a time. She turned down her nose, heaved a deep sigh, and said, “The fox is not my animal.”

Perfectly true, I thought to myself. With that temperament she’d be better off starting out with a turtle.