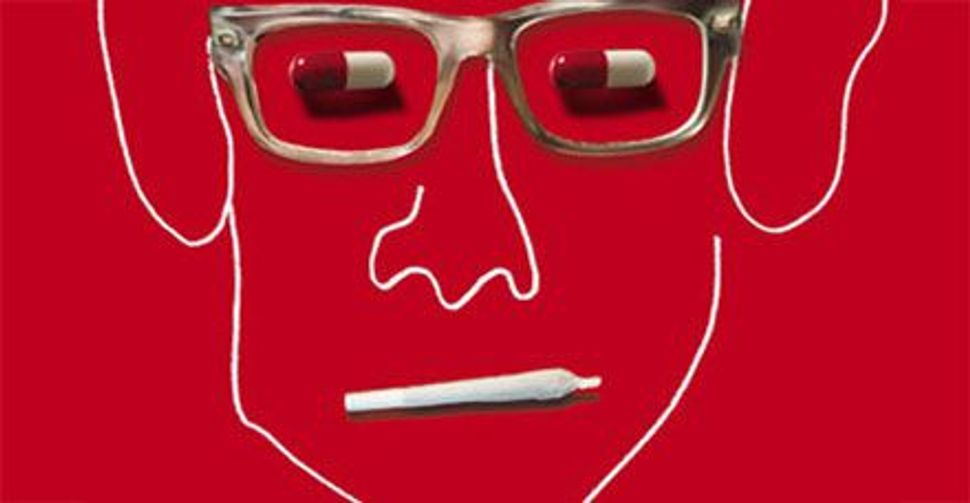 Kasher in the Rye: The True Tale of a White Boy from Oakland Who Became a Drug Addict, Criminal, Mental Patient, and Then Turned 16
By Moshe Kasher
Grand Central Publishing, 320 pages, $24.99
Flatscreen: A Novel
By Adam Wilson
Harper Perennial, 336 pages, $14.99 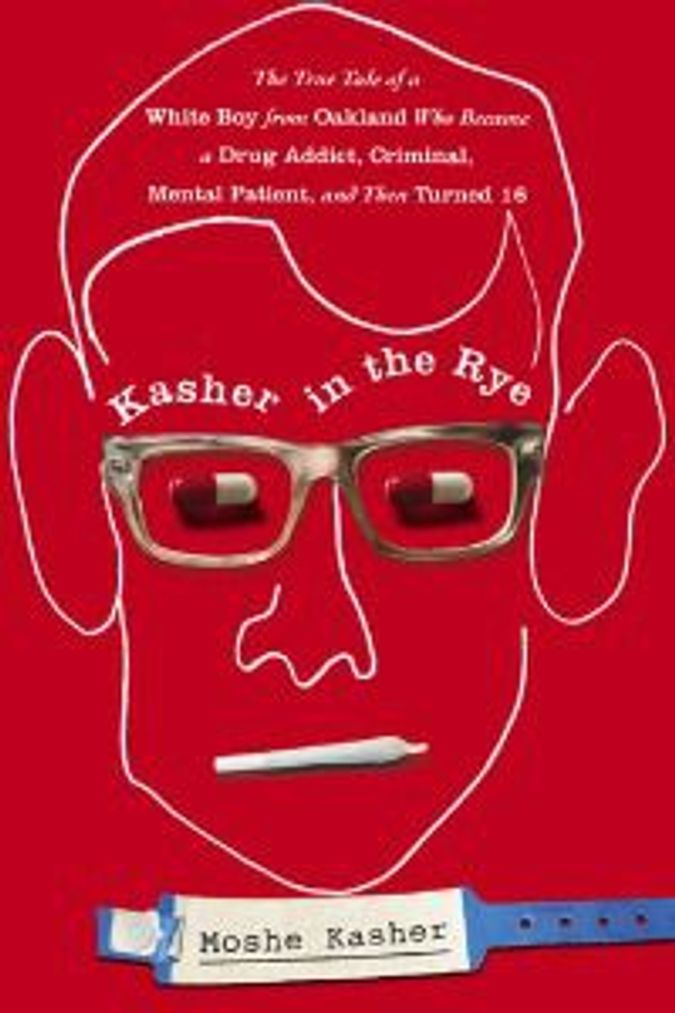 Since when did alcoholism and drug addiction become part of the American Jewish experience? Obscured by the allegedly resounding success of Jews in North America, those Hebrews who are left flailing in the face of insurmountable difficulties are often swept under the cultural rug. Spoken about in hushed tones, Jewish screw-ups don’t generally get booted out of the tribe, but they aren’t usually celebrated like the rest of our Nobel Prize-winning, higher-IQ-than-everyone-else, more-successful-in-everything-except-for-sports Jewish family. Throwing a spanner into the works are two debuts by young Jewish writers who have come forth to expose the seamy, alcohol-soused, drug-addled underbelly of the American Jewish experience. Pretty, they’re not. But hilarious, they are.

“Kasher in the Rye” is Moshe Kasher’s gut-wrenching memoir of a youth so wasted one cannot be anything but astounded that he managed to survive it. Truth is, he nearly didn’t. A hearing child of deaf and divorced parents, Kasher and his brother were abducted by their mother and plunked down in a poor neighborhood in Oakland, California. There his family lived on welfare, and he was in therapy by the age of four. His volatile father, who had been a painter, remained in New York, became religious and wound up moving to Brooklyn to marry a deaf Satmar Hasid.

With the exception of a few crazed summers spent among the Hasidim, Kasher stays in and around the gritty neighborhoods of Oakland, where he falls in with a band of merry and very unsavory delinquents. By seventh grade, he’s drinking, smoking pot and dropping acid on a near daily basis, writing poor quality graffiti and morphing into a general menace to society. 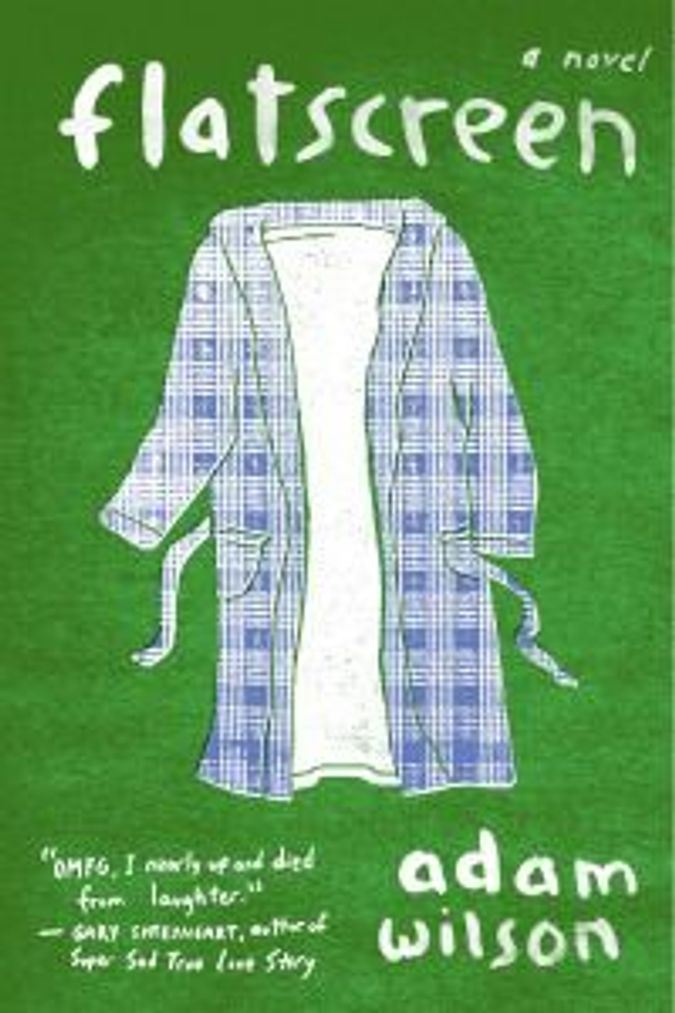 With a cocktail of learning disabilities and a social deck stacked against him, Kasher wends his way through a broken maze of schools and rehab programs, rebelling all the way and getting ejected from each and every one. A frequent shoplifter, he also steals from his mother and grandmother, fighting them with word and fist, and is sucked so deeply into a maelstrom of drugs and alcohol that his bedroom becomes a urine-soaked hellhole that no one but he will enter. Oh, and he’s only 15 years old: such a nice Jewish boy.

Kasher sounds horrible, and he unquestionably was. But buried somewhere inside of this frightened, raging, drug-addicted teenager was a decent kid aching to get out. If not for the dedication of his mother, who put up with more daily terror than one can imagine, he might not have made it. Emotionally wrenching and profoundly moving, Kasher’s tale is also deeply funny. Writing in a wry, winking style, he manages to turn his gut-churning experiences into a furious comedy of teenage survival.

Not a memoir, but a work of fiction, Adam Wilson’s debut novel, “Flatscreen,” also introduces a young Jewish anti-hero — a drug-addled, slacker Oblomov named Eli Schwartz, who stumbles around suburban Boston in a ratty bathrobe, contending with, among other things: a successful older brother; his parents’ unpleasant divorce and the fallout thereof; and the specter of his own total failure at pretty much everything, including a marked inability to get laid.

Eli’s man-boy-cave idyll is disrupted by the sale of his childhood home to Seymour Kahn, a former actor and local celebrity who, despite spouting often bizarre pearls of wisdom, turns out to be a wheelchair-bound, drug-addicted pervert who has been kicked out of the poolhouse of his now lesbian ex-wife. In other words, a perfect mentor for young Eli.

After selling Kahn a bag of weed in synagogue on Yom Kippur, Eli is introduced to his strange world. Complicating matters, Eli’s older brother embarks on a relationship with Kahn’s gorgeous daughter while poor Eli is miserably single and celibate. In love with a Latina EMT who doesn’t reciprocate his feelings, but manages to save his life a number of times, Eli makes failed attempts to date a clearly off-kilter local girl. Constantly cycling downward, his lack of direction and increasing use of all kinds of drugs send him spinning out of control.

The Schwartz suburban saga is raucously funny. Wilson expertly crafts explosively hilarious scenes ranging from a Viagra/Oxycontin/cocaine-driven meltdown during a high school football game to the complete destruction of what might have been a reasonably pleasant Thanksgiving dinner with family and friends. Wilson brings Eli to his senses only after a drug- and alcohol-induced bacchanal at which he winds up nearly getting murdered — the first step on his road to recovery.

Not content with a straightforward novelistic format, Wilson playfully divides the book into three major sections, each with multiple chapters, many of which are scattershot poetic meditations on Eli’s condition, while other chapters provide informational bullet points on issues at hand. For some, this may take a bit of getting used to (not unlike his movie-referencing tactic), but it works in a way that cajoles readers into feeling like they are reading a memoir, not fiction.

Consistently playing with form, Wilson offers a selection of “possible endings” interspersed among the chapters in the final section. Though he finally provides a singular resolution, a variety of visual genres dictate the other possibilities he shows for Eli’s sad predicament. The plethora of endings suggests how a literary product might navigate a filmic world.

Although “Kasher in the Rye” is a memoir and “Flatscreen” is fiction, the two works share themes of drug addiction, divorce, love, betrayal, fury and recovery, all within two very different but distinctly Jewish contexts. With the appearance of addiction/recovery memoirs like Alan Kaufman’s “Drunken Angel,” recovery is fast becoming an important component of Jewish literary life. Not long ago, Philip Roth claimed that the novel as a genre was dead. He was wrong: It’s just on drugs.