A Poem of One’s Own 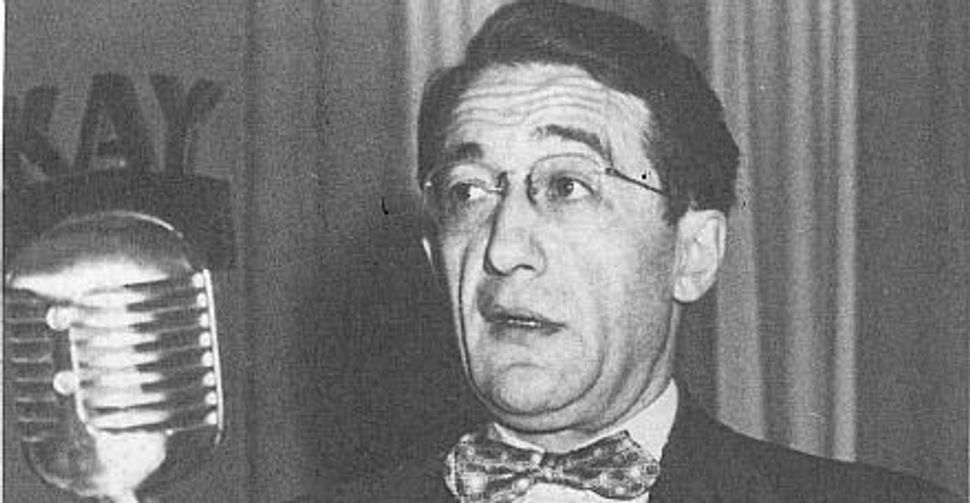 Image by Courtesy of the Montreal Jewish Public Library 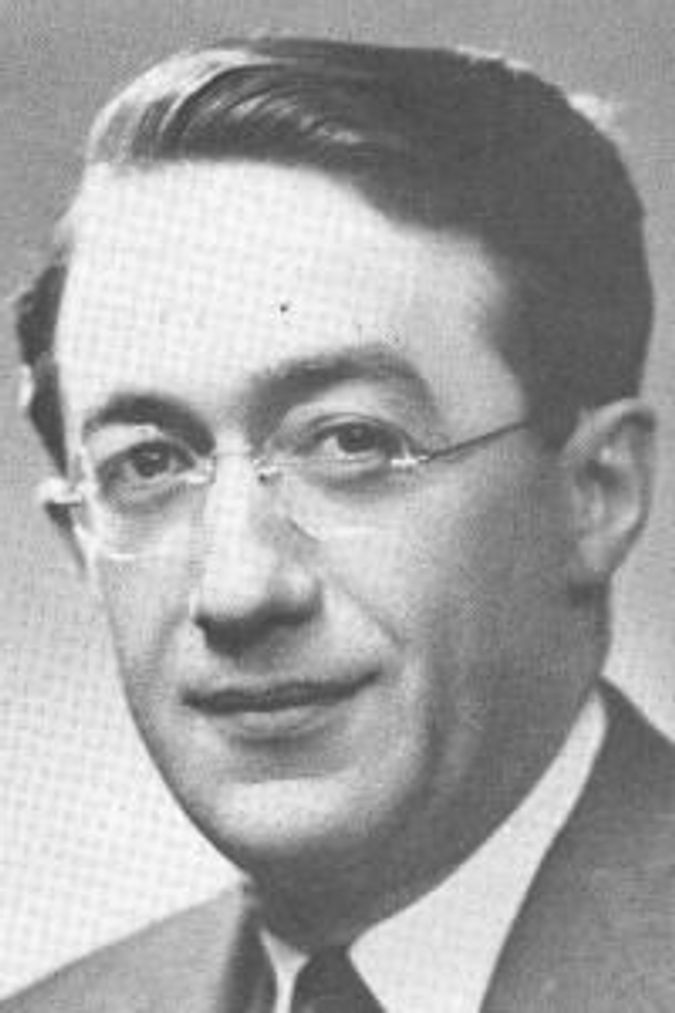 Those of us involved with Jewish life and culture in the Diaspora must often ask ourselves a fundamental question: Do we view ourselves as one among many minority cultures that comprise our larger society? Or do we think of ourselves as heirs to a separate, millennia-old tradition that travels along its own trajectory?

These are broad designations, and not mutually exclusive. The problem could be phrased 100 different ways, as it has been for 100 years. In the American context, we might ask it like this: Are we the American wing of the Jewish people, or are we the Jewish wing of the American people? The answer is not either/or, and it inevitably involves qualifications, explications and exceptions.

Yet the question confronts us today as strongly as ever. While it applies to all Diaspora Jews, it is especially difficult for artists and writers who don’t just situate themselves within a culture, but contribute to that culture’s creation. To whose culture do they contribute? And to whose should they? Among Jewish writers of the past century, no one was more sensitive to this question than A.M. Klein.

Klein was a Canadian-Jewish poet best known for his foundational role in Canadian modernism as well as in the creation of Jewish poetry in English. Though he is barely remembered today outside of Canada, there he is celebrated for both achievements and has been honored with a series of collected works covering his poetry, journalism, criticism and fiction. The final volume, “A.M. Klein: The Letters,” was published late in 2011 by the University of Toronto Press. 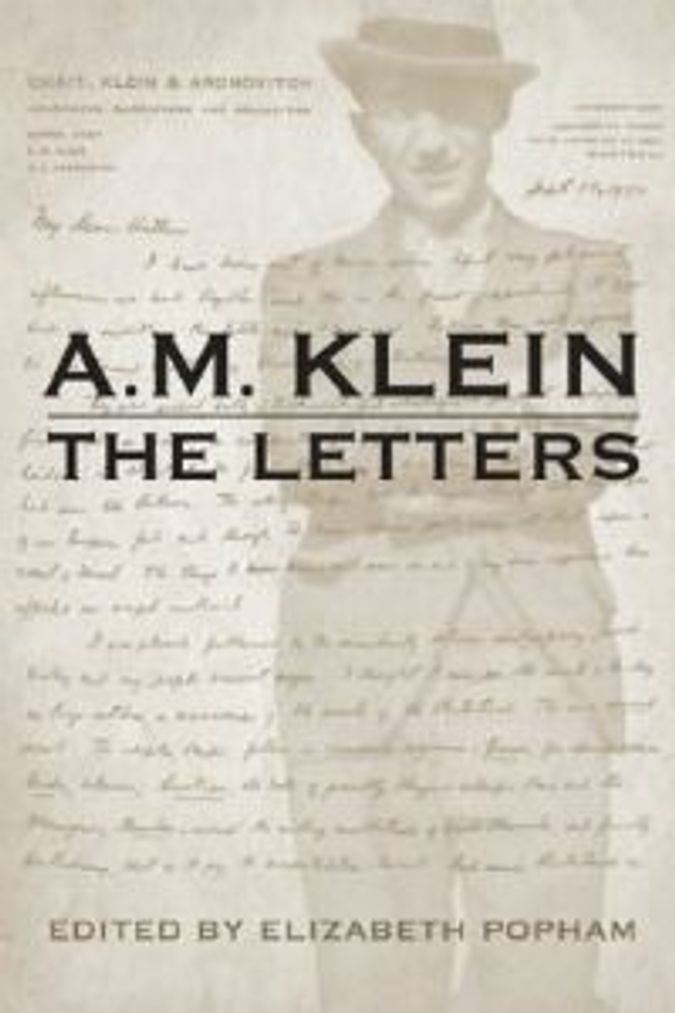 Literature was only one of Klein’s pursuits. By profession he was a lawyer, and from 1938 to 1955 he served as editor of the Canadian Jewish Chronicle. He was a speechwriter and publicity consultant for whiskey magnate Samuel Bronfman, and for three years he was a lecturer in poetry at McGill University. After visiting Israel in 1949, Klein became a popular speaker on the Jewish lecture circuit, addressing audiences across the continent about the newly created state. He was even a political candidate on two occasions for the socialist Co-operative Commonwealth Federation, a forerunner of today’s New Democratic Party.

Klein’s letters reflect all these activities and give the impression of a conscientious, busy, talented writer. His correspondents included fellow poets like A.J.M. Smith and Karl Shapiro, and longtime friends like Henry James biographer Leon Edel. He wrote to employers like Bronfman and to editors and publishers at the Jewish Publication Society, New Directions press and Poetry magazine. He was often compelled to defend his professional and creative interests, and sometimes he took on the peeved tone of a writer not being given his due. He was also, frequently, very funny.

“As to my book — may my publisher be drowned in ink, may he be crushed between presses, may the printer’s devil take him — he is giving me the runaround.” So he wrote in 1938 to Joseph Frank, an old friend from his days in Canadian Young Judea. To Solomon Grayzel, his editor at JPS, he directed a similar complaint: “Is there anything new, or does your committee insist that the book be published posthumously?” Advised by James Laughlin at New Directions to turn the other cheek to a hostile reviewer, he replied, “I turn him all four.”

The letters bring to light lesser-known aspects of Klein’s career, such as his English adaptation of a Brazilian play for Yiddish actor Maurice Schwartz (the performance was savaged by critics, and the play closed after four shows), and the fact that he turned down the editorship of Commentary magazine upon its inception in 1945. Among his many interests, Klein was a devoted reader of James Joyce and spent years working on a comprehensive commentary to “Ulysses.” The manuscript was never completed, but it put him in touch with Joyce scholars around the world. In their tapering off the letters reflect Klein’s mental breakdown and gradual withdrawal from public life, starting in the mid 1950s and lasting until his death in 1972, though they do not illuminate the tragedy of his final years beyond the little that is already known.

The collection takes on its greatest emotional and intellectual heft when Klein was induced to defend or advance his creative vision, particularly the Jewish nature of his work. Like many writers before and since, Klein was unwilling to be pigeonholed as an ethnic sideshow, and he objected to critics who read him in only a Jewish light. (In a letter to Smith, he complained: “Why did they… have to go flaunting my circumcision? It’s an adolescent trick — this whimsical opening of another man’s fly.”) But unlike many authors who have rejected the “Jewish writer” designation — Philip Roth once said that he instead considers himself a “writer who is a Jew” — Klein took his Jewishness and the Jewish content of his work as given. The question for him was not whether he was a “Jewish writer,” but how to be one.

Fluent in Yiddish and well versed in Hebrew and the rabbinical canon, Klein was fully at home in the Jewish literary tradition, and he believed strongly in its value. In a 1940 letter to Yiddish critic Shmuel Niger, he described his resentment over Yiddish literature being “treated as a series of curiosities” and over anyone being surprised that it was “mit leiten gleich,” or equal to the best. As a cultural Zionist in the vein of essayist and editor Ahad Ha’am, Klein was much enamored of the renewed vigor of Hebrew literature, and he translated the poetry of Chaim Nachman Bialik.

Yet Klein chose to write in English, a decision that created its own difficulties. For Hebrew or Yiddish writers, their very language made them part of the Jewish tradition, whether they wrote about Hasidism or Hegel. Once writers like Klein stepped into English, could they continue to claim a place in that tradition? What would define their work as Jewish?

For Klein, the answer lay not only in subject matter — his upbringing in the Montreal immigrant community was a frequent theme — but also in a Jewish sensibility that he experienced not as choice but as fact. Writing to Laughlin in 1944 regarding his mock epic poem “The Hitleriad,” which he felt had been unfairly ignored by Jewish critics, he distinguished himself from Jews who tried to hide their Jewishness as well as from those who declared it too much.

Let me make myself clear. I am not one of those I-am-proud-to-be-a-Jew Jews. A Jew I am; the whole world knows it, and I accept that fact like the fact that I have two arms… As for myself, I believe I still have a contribution to make as a Jew, a contribution to the culture of the group — the whole group — in which I dwell… Other cultures, therefore I meet as an equal, not as an interloper. I travel on my own passport.

It is worth noting the courageousness of Klein’s position. For an ambitious, creative writer, the Jewish road could seem constricting. Few Diaspora authors of Klein’s time, writing in English, were as overt about their Jewishness, or as compelled by it. But for Klein it was the most important project he could think to undertake. “The continuation of our own culture stands before the Jewish writers as the challenge,” he wrote to Shapiro in 1948. “One can either… associate one’s Jewishness with all the negativism [that] history like a mad Rashi, has appended to it; or one can feel oneself, and develop oneself as part of a great tradition, a tradition whose fruitfulness is by no means exhausted.”

Through his work, Klein demonstrated how that tradition could be pursued in English — how to “bring to the well of English that mineral content… which is my heritage from my biblical forefathers.” Just as important was the boldness he displayed in doing so, a boldness still called for today. Authors of the past century have earned a place for Jewish experience in mainstream literature, and Jews in general have achieved success in all streams of Diaspora life. But that has not yet eliminated the strain of Jewish self-contempt that treats our own culture as worthy of attention or respect only when it is also recognized by non-Jewish society. As I once heard a prominent community activist remark, “Jews love what non-Jews love about Judaism.” Though he meant it as strategy rather than as criticism, it remains one of the saddest observations about the Jewish community I have ever heard.

Klein himself craved broad recognition, and he rebelled against parochialism wherever he found it. His writing embraced themes beyond the Jewish frame, such as the multilingual culture of Montreal and the lives of rural Quebecois. He considered himself possessed of “true patriotism” when it came to Canada, and participated fully in the social, political and literary life of Montreal. He can be read today as a Canadian, a modernist and a Montrealer, as well as a Jew. But at the core of Klein’s public, private and creative self was a belief in the Jewish cultural tradition and the desire to continue it. In the end, he traveled on his own passport.

Ezra Glinter is a staff writer for the Forward. Contact him at glinter@forward.com or on Twitter @EzraG

A Poem of One’s Own