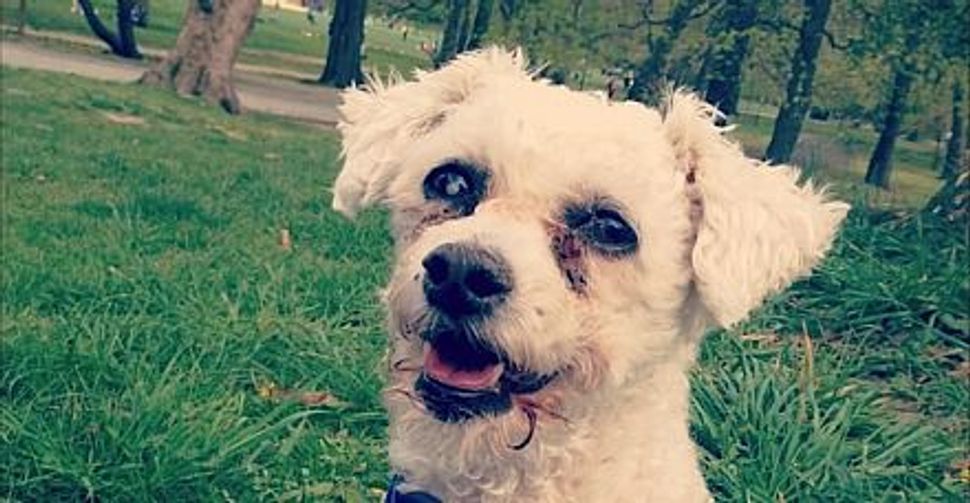 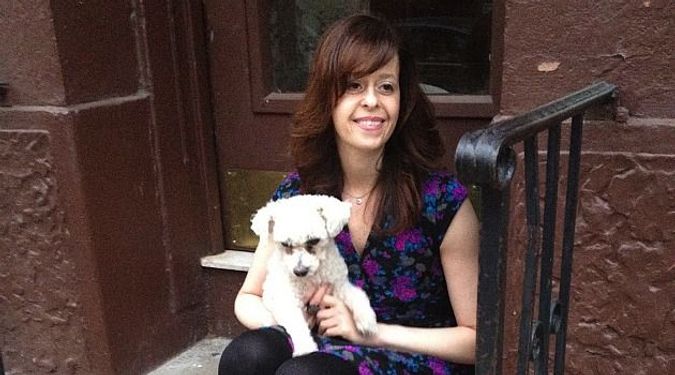 As I peer down at her cotton-puff head, my sense of guilt sets in. Peeps, my bichon frise associate, has just taken a cocktail of three different medicines meant to keep her ticker ticking. Her eyes water, and her mouth turns downward, quivering slightly. It’s obvious she is not digging this new regimen. At 13, this lady has lived long enough to endure an onslaught of insults to her pot-bellied little being — epilepsy, cataracts, a successful surgery to rid her of cancer and, most recently, congestive heart failure.

Each time, Peeps mobilizes and makes room in her life for the difficulties these maladies present. Despite this nobility, I know she will someday leave this world of stealing cat food, lolling in the sun on her paw print pet bed and inhaling cooked string beans in unsalted chicken stock. (The latter is a substitute for her beloved salty pet store treats.)

In thinking about that fateful day and how to commemorate Peeps’s life, I am confronted with the fact that there is no Jewish roadmap for how to properly mourn pets, no universal law or tradition for how to close the circle of a pet’s life.

According to Ari Enkin, an Orthodox rabbi in Israel who has written several books on Jewish law, equating the loss of an animal with the loss of a human is inappropriate. Enkin recently discussed the question of whether, upon the death of a beloved pet, it is appropriate for a Jewish person to say “Baruch dayan ha’emet,” or “Blessed is the True Judge.” It is reflexively uttered by many Jews in response to death and tragedy.

Enkin said that some halachic authorities find precedence for doing so, but only in the context of financial loss; animals were often one’s only source of income in earlier times. A blind person, for example, might recite the blessing upon the passing of a guide dog, since such dogs are expensive to replace.

As a former yeshiva girl who instinctively turns to Jewish tradition for comfort in trying times, I found Enkin’s comments unsatisfying. There is, after all, a clear legacy of compassion for animals in the Torah. Deuteronomy tells us that a person is required to feed his animals before himself, and that one is obligated to relieve an animal’s suffering. The Talmud provides the precept of tza’ar ba’alei chaim — that it is prohibited to cause pain to animals. The term nefesh chaya, a living soul, was applied in Genesis to animals as well as to people.

Seeking continuity from where these laws leave off, I ultimately found that it is mostly Reform and Conservative rabbis who give more credence to the desire to mourn pets in a way that is distinctly Jewish.

One problem, said Reform Rabbi Robin Nafshi of Temple Beth Jacob in Concord, N.H., is that the Bible only references animals as “livestock” or “wild beasts.” “There is no anticipation in the Torah that we would have pets,” Nafshi, who has presided over many ceremonies for the the loss of an animal, said.

She said that although reciting Mourner’s Kaddish is not appropriate for the death of a pet, contemporary Jews have developed rituals and prayers to help families cope with the loss of a beloved animal.

At Temple Beth Torah in Tamarac, Fla., Conservative Rabbi Michael Gold occasionally invites his congregants to bring their pets to synagogue on the Sabbath to be blessed. “People really appreciate the Blessing of the Animals and have even requested I say special prayers for pets who are sick,” Gold said. He adapted a Jewish prayer from St. Francis of Assisi’s blessing for animals, offering it to people who are grieving over the death of their pets.

Reform Rabbi Andrea Frank, based in New York’s Westchester County, has performed numerous pet funerals, drawing from Tehillim and reading passages that she writes and personalizes for the bereft. “A good majority of rabbis from a halachic point of view say you are not supposed to have a burial,” Frank said. But “God created the animals before humans. Everyone seems to forget that.”

She recalls being contacted by a woman who was devastated about having to euthanize her sick dog. “We had many conversations while she was going through the process of having to make that decision. I guided her the whole night until it actually took place,” Frank said.

Frank is not alone among clergy in wanting to provide that comfort. Westchester County’s Hartsdale Pet Cemetery, one of the world’s oldest burial places for animals, has a chaplain who routinely holds formal funeral services for its deceased.

“I always ask, “Was Fido Jewish?” said the Rev. David James, who has been of service at the cemetery for 20 years. It all began the day the cocker spaniel of a woman in his former parish died. The congregant asked James to say a prayer for her pet at Hartsdale. Afterward, at the cemetery, another pet mourner saw the reverend in his clergy garb and requested similar words of comfort. “It sort of tapped me on the shoulder,” James said of his current calling.

He typically reads from Genesis to attendees of his Jewish pet funerals and always uses the 23rd Psalm, saying it is one of the most comforting universally. “It likens us to animals, with God as our shepherd,” he said.

James also recites a passage adapted from a Reconstructionist prayer book, from the series “Kol Haneshama: Shabbat Eve” by Rabbi David A. Teutsch. That prayer says, in part, “Pour upon us your love, lift us up in our sorrow, and keep us on the path of companionship and loyalty that our animals have taught us.”

James points out at the beginning of his funeral services that the loss of a pet can be as emotionally distressing as the loss of people in our lives: “I say … it’s emotionally healthy to participate in a memorial service and to say goodbye to the wonderful animals that have brought joy and comfort.”

James advises me to pay a visit to the Hartsdale Pet Cemetery. He hopes it will help me with my own personal journey. “I think you will find it one of the most beautiful little places,” he said, adding, “And you’ll be surprised at how many Stars of David are on the tombstones.”

Karen Iris Tucker is a Brooklyn-based freelancer who writes about health, culture and entertainment.