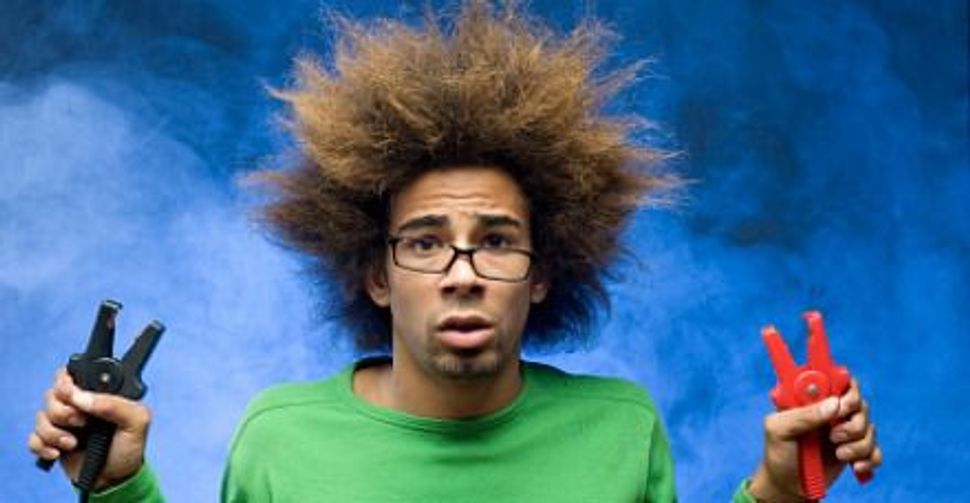 Just a Trim: Sometimes a visit to the hair salon can involve three or more languages. Image by sashafatcat via flickr

“When as a child I needed a haircut — desperately, according to my mother — she would say, ‘Azoy a shmenge oyf den kopp, a mameshe choprene.’ This always seemed to me more Polish or German than Yiddish. She herself came from Lvov and knew all three languages. What is the derivation?”

What Mr. Hoffman’s mother probably said was, “Azoy a shmenge af dayn kop, mamesh a tshuprine,” roughly translatable as “What a head of hair you have, a real mop!” Such a sentence indeed has both German- and Polish-derived words, as well as a Hebrew one, but to call it “more Polish or German [or Hebrew] than Yiddish” is to betray a misconception about Yiddish. Although all languages borrow words from others and adapt them to their own internal systems, Yiddish has done this more freely than most languages, which is why linguists have called it a “fusion language.” There is no such thing as Yiddish-in-itself apart from Yiddish’s Germanic, Slavic and Hebraic components — and yet curiously, whereas the speakers of most languages are not aware of, and cannot sense, the different linguistic strands intertwined in their speech, Yiddish speakers are generally able to do so.

For example, although the English sentence “What a head of hair you have, a real mop!” has in it both Germanic and Latin-French elements, no ordinary English speaker could tell you which are which. (In reality, the first half of the sentence is etymologically Germanic, while “real” and “mop” go back to Latin and entered medieval English via French.) In Mr. Hoffman’s mother’s Yiddish sentence, on the other hand, though it, too, breaks down into two similar halves, most Yiddish speakers would probably say that azoy a shmenge af dayn kop sounds Germanic to them, that mamesh sounds Hebraic and that tshuprine sounds Slavic.

Tshuprine is the Polish word czupryna, a tuft or cowlick of hair falling over the forehead. Indeed, the word not only sounds Slavic in Yiddish, but also has a culturally Slavic connotation, since Jewish men in Eastern Europe did not customarily go about with such hair, which was considered a Christian style. When a Jew is described in Yiddish literature as having a tshuprine, we are being signaled that he is affecting a non-Jewish air of boyishness or manliness. In Mr. Hoffman’s case, though, he may simply have looked unkempt to his mother.

Mamesh comes from Hebrew mamash, “real,” “tangible” or “substantial.” The word goes back to the verb l’mashesh, to feel or explore something with one’s fingers, and it can also function in both Hebrew and Yiddish as an exclamation: for example, “Did you actually see that?” “Mamesh!” — that is, “I really did,” or, “It’s a fact!”

As for the first half of our Yiddish sentence, azoy, which here means “such,” derives from German also; af dayn kop, “on your head,” from German auf deinem kopf, and shmenge — well, this is a puzzler, because while it certainly sounds Germanic, schmenge is not a German word. You won’t find it in a Yiddish dictionary, either. Indeed, you won’t find it in any language. Most likely, we’re looking at the German word menge, “a large quantity,” “a whole lot of” or “a heap,” prefixed by the belittling Yiddish “shm,” familiar to us in Yinglish from such expressions as “money-shmoney,” “president-shmesident,” etc.

True, menge is not one of the large number of German words in Yiddish, in which it either never existed or didn’t survive. Yet here’s where Mrs. Hoffman’s Lvov origins and knowledge of German come in. Prior to World War I, Lvov — Ukrainian Lviv, Polish Lwów and German Lemberg — was the largest city in Austrian-ruled Galicia and had a large German-speaking population, along with a large Yiddish-speaking one. It would have been perfectly natural for a Lvov Jew to have taken the German menge and turned it mockingly into shmenge. When talking about Mr. Hoffman’s need to see a barber, this would have been like saying, “That’s some shmeap of hair you’ve got!”

That’s my guess, anyway, although I have no idea if shmenge was in general use among Lvov Jews or if it was Mrs. Hoffman’s own invention. One way or another, it’s a good example of how Yiddish has taken words from other languages and Yiddishized them, whether by giving them a new meaning, changing their pronunciation (German kopf, Yiddish kop; Hebrew ma-MASH, Yiddish MA-mish) or altering their grammar (the loss of the German dative ending em in dayn). In fact, of the nine words in Mrs. Hoffman’s sentence, only one, tshuprine, is exactly the same as in the language from which it came.

Can Yiddish borrow all it wants from anywhere and still remain Yiddish by subjecting the borrowing to its own phonetic and grammatical rules, or is there a limit — and if so, where does it lie? Is vayp di vinde for “wipe the window” acceptable Yiddish or simply English mispronounced with a Yiddish accent? I will leave such questions to the theoreticians. The very fact that they can be asked about Yiddish (it would not occur to anyone to inquire whether ouaipez l’ouindeau is acceptable French) is proof that it is indeed a fusion language.