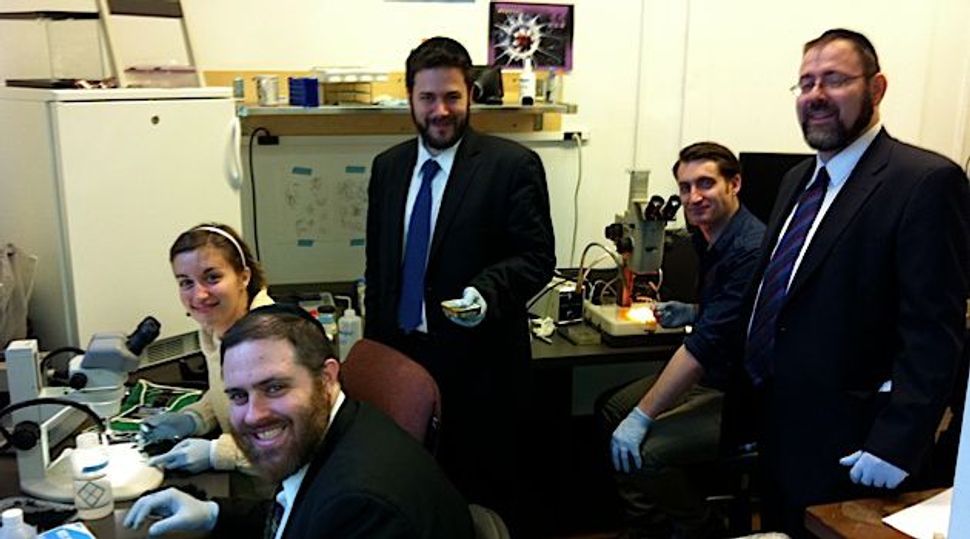 From the hulking Willamette meteorite to the sparkling Star of India sapphire, visitors to the American Museum of Natural History in New York are used to seeing unusual sights. But museum-goers last year were likely unprepared for the sight — and smell — of Rabbi Chaim Loike, as he walked past the ticket booths carrying grocery bags full of thawing frozen sardines, fish oil dripping onto the lobby floor beneath the barosaurus skeleton in the front entrance off of Central Park West.

Loike, a rabbinic coordinator with the Orthodox Union, the largest certifier of kosher food in the world, went to the museum in March 2011 to solve a challenging kashrut problem. He and his colleagues, including OU fish expert Rabbi Chaim Goldberg, had noticed a recent uptick in the number of parasitic worms contaminating certain kosher-certified brands of tinned sardines and capelin eggs — likely the result of newer deep ocean trawling methods — and they wanted to know where these piscatorial parasites were coming from.

Worms, in general, are not kosher. But according to Talmudic rules, microscopic worms that grow in the muscles of fish are considered to come “from” the flesh. And even though the idea of them may seem unpalatable, these parasites, which typically go unnoticed by consumers, are nonetheless acceptable by Jewish dietary laws. In contrast, worms that migrate into the fish meat from the guts, say, or elsewhere clearly come from outside the flesh, and the presence of such parasites would render any fish product unkosher.

Differentiating between these two kinds of parasites is no easy task. The rabbis knew the various worm species that normally develop inside their host’s muscles, yet they could not tell just by looking under the microscope which kinds of worms they were dealing with. Could the worms have migrated into the fish meat after the host had died? Or did they mature in the flesh in situ?

For answers, they teamed up with a group of parasitologists at the AMNH Sackler Institute for Comparative Genomics and turned to modern genetic methods to tackle the ancient Talmudic dilemma.

The museum researchers, led by worm curator Mark Siddall and his graduate student Sebastien Kvist, used a technique known as “DNA barcoding” in which a small region of the genome is decoded to yield a uniquely identifying string of genetic “letters” to pinpoint the species. They ran samples from the tinned fish, the capelin roe and even Loike’s frozen specimens through a gene-sequencing machine and determined that all of the worms co-mingling with the food were of the type that develops in the muscle.

As a result, the kosher certification could stand. “The Talmud basically says that most worms you find in a fish come from the flesh, and what the museum showed us is that that still happens today,” said Loike. The AMNH scientists published their findings earlier this year in the Journal of Parasitology.

Still, not all kashrut experts think this study does anything to resolve the longstanding controversy over whether these worms pass halachic muster. According to Rabbi Gershon Bess, a member of the Rabbinic Council of California who advises on issues relating to kosher foods, the genetics only confirms what rabbis and scientists already knew: Namely, that the worms found in the flesh and viscera are not a result of outside contamination but rather the natural life cycle of those known as Anisakis nematodes.

Although Anisakis worms spend part of their life cycles within the flesh of fish, the early part of the worms’ maturation occurs both living free in the ocean and inside of crustaceans known as krill. Larger fish eat the krill, and the parasites then make their way to the flesh. The final transition from late-stage larvae to fully mature adult worms occurs when the fish are ingested by even larger whales and other marine mammals.

Given the totality of the worms’ development, Bess and many of his contemporaries argue that fish products containing these worms should be off-limits. “There’s no question that the worms are visible to the eye [before entering the fish],” he said. “Therefore, according to the Talmud, it should be forbidden.”

Regarding the OU’s certification, he added: “It’s an extremely weak position and doesn’t really work with the reasoning of any of the halachic authorities throughout the generations.”

For his part, Kvist, a non-Jew from Sweden who freely admits that he had never thought about kashrut issues before coming to the United States to study, is just happy to have been part of such a unique research collaboration. “I remember looking up from the microscope and seeing one rabbi by another microscope and two others with their heads bent over dishes with roe and yet another one dissecting fish meat,” he said. “I remember thinking how unconventional this situation was but feeling happy that I was involved in it at all.