Into the Wondrous ‘Woods’ Again 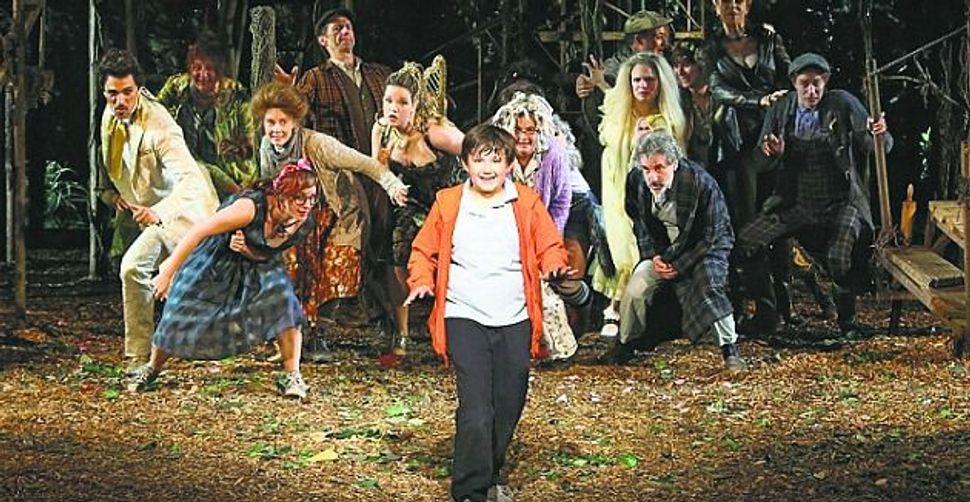 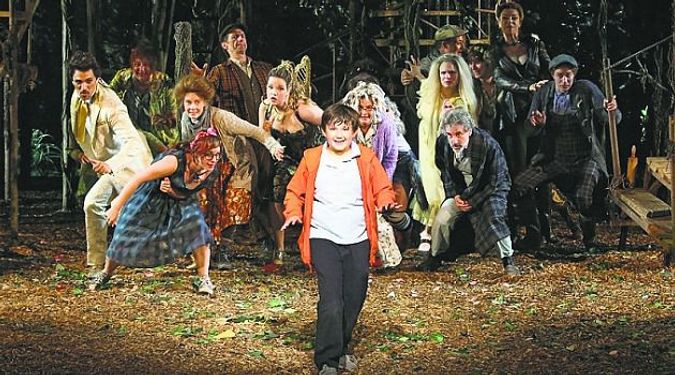 Children May Listen: The Public Theater?s production of Stephen Sondheim?s ?Into the Woods? features a child as narrator. Image by joan marcus

The sky is turning orange behind the black trees of Central Park, just like the set I remember from 25 years ago. I’m inside one of the city’s greatest works of art, the park, waiting to see another: the revival of Stephen Sondheim’s “Into the Woods.”

I do remember that night in 1987 at the Martin Beck Theatre. I remember where we sat — down front, to the left of the stage. I remember the thrill of waiting to hear Sondheim’s newest notes, his newest words since “Sunday in the Park With George.” In what direction was he going? I felt a little awed, but it was a good kind of awe — alive, not dead. I was sharing Sondheim’s lifetime. I was alive to watch his genius unfold. 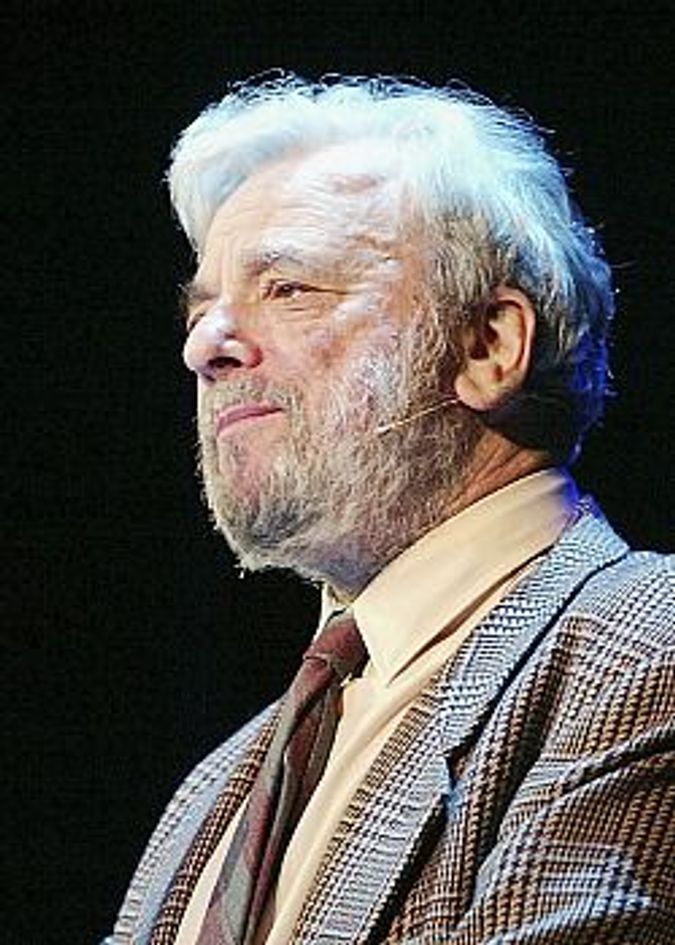 Twenty-five years ago I was a newcomer to the city, a transplanted Southerner. I lived in the East Village, where rents were affordable for struggling artists. It was still a scrappy and dangerous neighborhood then — and I was still scrappy, making a living by cobbling together grants and teaching gigs.

I’d always loved musical theater, beginning with the Rodgers and Hammerstein musicals I knew from the movies of my childhood, up through “West Side Story” and even “Jesus Christ Superstar.” I grew up writing poetry and listening mostly to classical music. My favorite musical instrument was the human voice. I loved best the forms where music and words came together: Schubert’s lieder; the few operas I had been exposed to in North Carolina; “Tosca”; Menotti’s “The Medium,” which I saw on TV, and his astonishing opera “The Consul.”

On a visit to the city in 1973, I saw and loved Sondheim’s “A Little Night Music.” (I even waited at the stage door for Hermione Gingold.) When I finally moved here, in 1984, a friend who was a hardcore Sondheim lover took me to see “Sunday in the Park.” I was bowled over. This was what I’d been waiting for all my life — something with the complexities of opera and the accessibility of musical theater. I couldn’t believe my friend knew me well enough to know how much I’d love this.

Three years later, I went with her to the original production of “Into the Woods,” Sondheim and James Lapine’s dark fairy-tale mash-up, in which characters from “Little Red Riding Hood,” “Rapunzel,” “Jack and the Beanstalk,” and “Cinderella” cross paths with each other and with a childless baker and his wife.

How surprising and inevitable everything seemed that night in 1987, as is true with all great works of art. So many pleasures. The brilliant rhymes, the delicious humor, the ironies rubbing against each other (as it were and not as it were), the suburban couple lost in a fairy tale world. The bean theme, the staff of life, twisting and turning, backward and forward, replicating itself. The ravishing melodies seeming to come out of nowhere and then sink back down before you could hold them; the Witch’s love song to her daughter, “Stay With Me.”

Tonight, though, even after things are well under way, I feel oddly distant from the performance. My companion says he feels this, too. We wish the orchestra were out in front, or at least visible. We want to feel more inside the music.

But my biggest problem tonight is that a child has been cast as the Narrator. At first, this seems like an interesting idea for coming up with a fresh way to look at the musical. Worth toying with, maybe. After all, fairy tales are for children. But for me it doesn’t work.

Like “Macbeth,” where the haunted woods creep ever closer, and like other Shakespeare plays, “Into the Woods” is about time. Time has been cursed. It’s out of joint. Parents have cast out their children or locked them up; the dead aren’t really dead, their curses spring up to ensnare their offspring. People aren’t going about the business of getting and spending, of having children, in the normal way. The natural order of things has been thwarted, and it has to be set right. Someone has to free the time.

That’s why a child can’t be cast as the Narrator. The Narrator tells the tale. We don’t need an added frame. There are already frames within frames, carefully set, the necessary number of mirrors. If you move just a finger, you upset the balance.

My companion tonight, who’s much younger than I am, asked me before the performance whether I was worried that I might have outgrown the musical. I told him he was either overestimating my maturity or underestimating the musical. It’s both, really. There’s a reason there’s a separate “children’s version” of “Into the Woods.” The only way they can keep the child as the Narrator throughout this production is to put him to sleep for the second act.

But my companion’s question is a good one. Meanings change, interpretations change. In the original production, Chip Zien played the Baker; tonight he’s playing the Mysterious Man. If I saw the original production today, would it mean as much to me as it did then? Is it the production, or is it me? I’m not the same person I was in 1987. Many things have fallen by the wayside. People, too.

In 1992 I moved out to Long Island, near the ocean, commuting to the city to my job, to work on the memoir that would help me lift the curse on my own family. Things were not what they seemed, it turned out. I had to go deeper. My father died in 1983, but like Sondheim’s Mysterious Man, he wouldn’t stay put. I had to dig him up and bury him again. I’d known him as a devout Episcopalian, but I found out he was Jewish — his line a long and distinguished one.

It took me 10 years to write that book, and 10 years of therapy. And just a year ago, almost to the day, in August, the therapist who helped me undo the spells of childhood died. She was little more than halfway through the woods.

Tonight, as the second act of “Into the Woods” takes hold, I find that the changes that have taken place in me have only made Sondheim’s musical more meaningful. Deeper, richer. I’m always surprised by how dark Act 2 is. Sadder and sadder. Relentless. The story won’t let go until it blesses us.

People start dying: Jack’s Mother, Rapunzel and the Baker’s Wife, whose last words to her husband are to wish him dead. She’s buried in the Giant’s footprint, because this is a story about learning to put yourself in someone else’s shoes. The first to die is the Narrator. Before the Witch throws him to the wolves, I mean to the Giant, I mean to the pit, he pleads his case: “You don’t want to live in a world of chaos.” But that’s where we are now. We haven’t just strayed from the path, the path has strayed from us. There is no path. The outside’s on the inside now. The frame is gone. The woods are in us.

The witch is our guide here, in the realm of Chaos — and our conscience. Maybe the choice she wants to make, to feed Jack to the Giant, is the wrong one, but she’s the only one who’s not afraid to act. She knows the only choice is to choose. “Wake up! There are people dying all around you. You’re not the only one to suffer a loss,” she tells the Baker, who’s mourning his wife’s death. Hardly the usual tone for a fairy tale.

In her final moments, she towers over the scene like Satan, the dark mirror image of the God (her mother) who cast her from the garden in the beginning and cursed her by aging her and taking away her beauty. Her last curse is to leave the others in the garden alone, “separate and alone,” bestial, “down on all fours,” scrabbling for the last of the cursed beans, the filthy lucre, she’s thrown them. She goes up in smoke (in the original production). Or descends into hell (tonight). Chaos has consumed itself. Chaos is dead.

The Mysterious Man returns. He gives his son, the Baker, the first sound piece of wisdom a parent has given all evening. All is not restored, as he’d promised at the end of the first act. The four who remain alive must make their own plan to confront the evil loose in the land.

Tonight, in the quiet moments between Cinderella and Little Red, just before Cinderella begins to sing “No One Is Alone,” I hear a few last, wakeful birds. The ringing of the locusts swells. I think of the world coming back into its proper frame: a stage in the middle of a park ringed by woods. Our little world. This enchanted isle.

The second act of my own life is well under way by now. I have a steady (if somewhat unorthodox) job, teaching literature to high school students and bringing them to the 92nd Street Y to meet writers. I live in Washington Heights, the last neighborhood in Manhattan still affordable for types like me. I’ve published a second book, but I’m still a struggling artist. There will always be more of us than of the other kind.

Now onstage, the Baker joins Cinderella, and both of them are singing to the younger ones. “Hard to see the light now. / Just don’t let it go. / Things will come out right now. / We can make it so.” I feel the power of the song — a masterpiece, in almost any performance — coming over me like a shadow stealing from behind, like the dark leafy branches of a great tree lifting me up.

Wendy Salinger directs The Poetry Center Schools Project at the 92nd Street Y. Her book of poems, “Folly River” (Dutton, 1980) won the first National Poetry Series award. She is the author of the memoir “Listen.” She’s currently finishing a sequel, “White Space: A Memoir of the Unconscious.”

Into the Wondrous ‘Woods’ Again